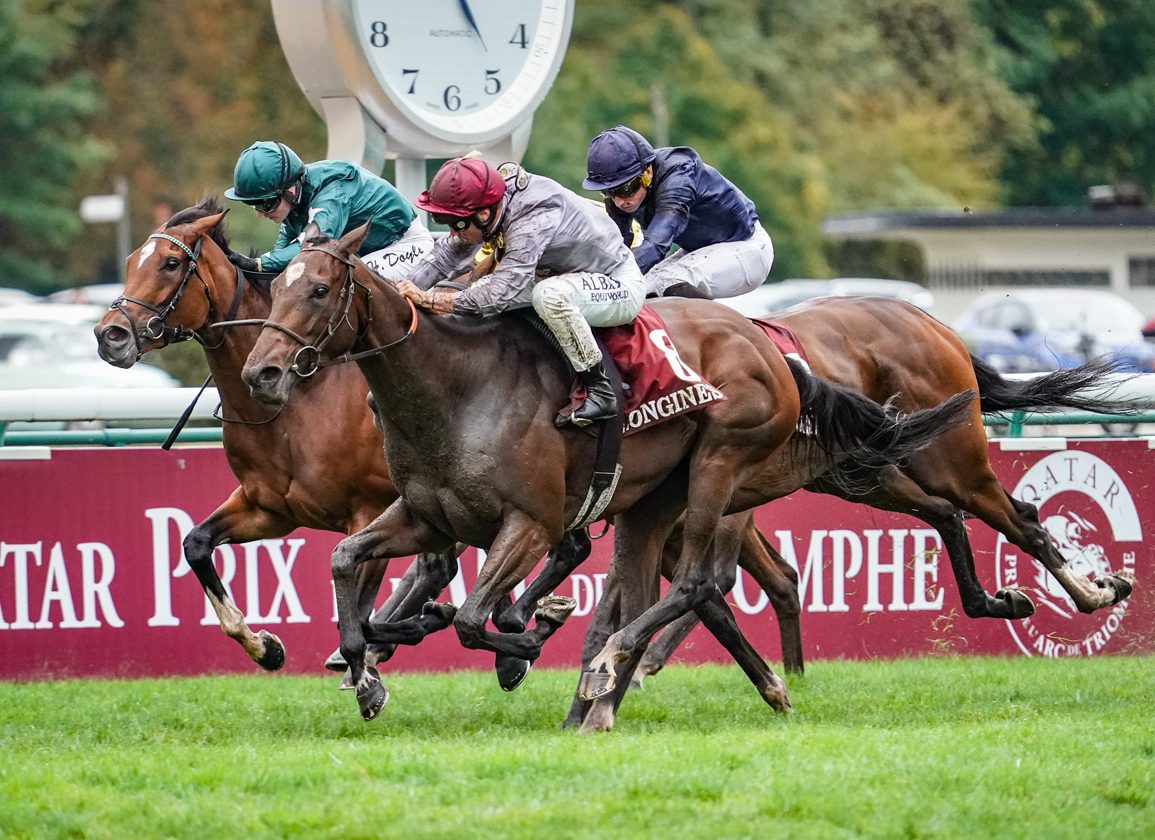 The €260,000 Arqana August graduate had earlier annexed Saint-Cloud's Apr. 29 G3 Prix Cleopatre before taking second behind another 'TDN Rising Star', Above The Curve (American Pharoah), when contesting the May 29 G1 Prix Saint-Alary over this 10-furlong course and distance in her penultimate start. With this effort, she has punched her ticket to the GI Breeders' Cup Filly & Mare Turf at Keeneland in November.

Shuffled back through the pack to race towards the rear after a sharp getaway, the 41-1 outsider responded to pressure from the turn into the straight to go fifth entering the final furlong and pounced inside the final 50 yards to deny Nashwa and Above The Curve by 3/4-of-a-length and a short head.

It was most certainly a case of right time, right place for Place Du Carrousel and breeder Ballylinch Stud, whose yearling half-sister by Kingman (GB) is due under the hammer as lot 261 on day two of Tattersalls' upcoming October Book 1 sale.

“Andre Fabre has done a magnificent job with the filly,” said Al Shaqab's racing manager Rupert Pritchard-Gordon. “He told me that she needed a break after the Prix de Diane as the filly had a hard race that day. He was worried because she hadn't had a prep race beforehand and that's why we went to Compiegne for a public gallop, which did her good. She's a tough filly, she got some good cover during the race and displayed neat powers of acceleration. To see these colours win on Qatar Prix de l'Arc de Triomphe day is very important.”

“We had a good race,” continued Mickael Barzalona. “They went off fast from the gates, but I managed to hold a good position on my filly. She did backpedal a bit during the race, but that enabled her to get a breather. She didn't expend any unnecessary energy in this ground and came with a steady run. Once she swung around [eventual fifth] Rumi, she finished with great gusto.”

The ground was a compromising factor for G1 Prix de Diane heroine Nashwa, who made a bold effort from the front only to be collared by the winner in the final metres. “She ran very well and, given her draw, it was not an easy task,” said John Gosden. “She had to make her effort quite early on and, furthermore, the very soft ground did not help her. We have no idea where she will go next. It's hard to get beaten, but she ran a good race.”

Above The Curve's trainer Joseph O'Brien reflected, “Above The Curve ran a good race on this ground. I'm proud of her as she was keeping very good company.”

It's an Arc day double for the master trainer and @mickaelbarzalon as Place Du Carrousel wins the Prix de l'Opera and @BreedersCup #wayi entry!