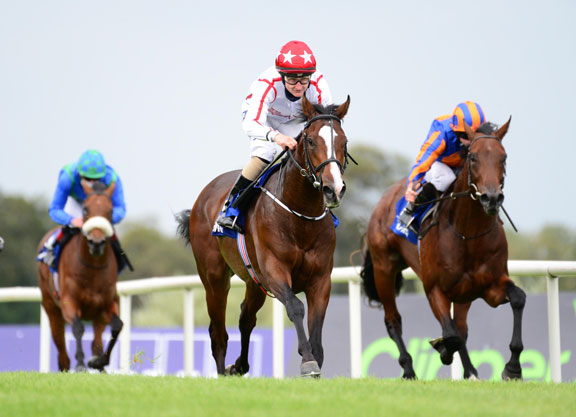 Irish Champions Weekend is as much about the juveniles as the proven older horses and Alpha Racing 2020's Cadillac (Ire) (Lope de Vega {Ire}) presented himself as one of the premier members of the 2-year-old brigade when surging to an impressive success in Saturday's G2 KPMG Champions Juvenile S., a Breeders' Cup Challenge Race. Having caused a stir at Leopardstown with a nine-length debut win over seven furlongs July 1, the bay had been second in The Curragh's G2 Futurity S. last time Aug. 22 but showed this step up to a mile held no fears. Forced wide with no cover throughout, the 11-8 favourite moved to Ballydoyle's Van Gogh (American Pharoah) at the furlong pole en route to a commanding 3 1/2-length success, with Reve de Vol (Ire) (Siyouni {Fr}) 2 3/4 lengths away in third. “I was a bit disappointed that he was beaten the last day, but he was raw and inexperienced as he didn't learn much on his debut,” jockey Shane Foley said. “He had a dogfight there and it stood to him. He was more of a man today–he was stuck on the wing, but is a good laid-back horse who only goes through the motions and you know there is something under the tank. He works just okay in the mornings, he wouldn't knock the house down but he obviously keeps his best for the track.”

Cadillac, an inspired €40,000 Goffs Orby purchase who came up a half-length short behind Mac Swiney (Ire) (New Approach {Ire}) in the Futurity, is Keeneland-bound now according to Kate Harrington, who said, “You'd have to be delighted with him. You saw the real Cadillac there today and he's a lovely horse. He's a horse that just goes through the motions at home, you don't really know how big an engine is in there but it's fairly big. He didn't really learn much the first day, but learned a lot the last day and he did it right there today. It's great for the syndicate, which we started two years ago and this is the second running of it. We're going to go forward with it next year and it's great to have a high-profile horse like this. I'd say, all being well, his next start will probably be in the Breeders' Cup Juvenile Turf.”

The dam Seas of Wells (Ire) (Dansili {GB}) is a daughter of Kyra Wells (Ire) (Sadler's Wells), who is a half-sister to the G3 Prestige S. winner Geminiani (Ire) by Sadler's Wells' son King of Kings (Ire) and to the G1 Phoenix S. heroine Damson (Ire) by another of the great Coolmore monarch's progeny in Entrepreneur (GB). Damson in turn produced the G2 Flying Childers S.-winning sire Requinto (Ire) from a mating with Seas of Wells' sire Dansili, and is the second dam of Last Kingdom (Frankel {GB}) who took the G3 Prix Daphnis. Also from the family of the G1 Sun Met-winning South African champion Whisky Baron (Aus) (Manhattan Rain {Aus}), Seas of Wells has a yearling filly by Sea the Stars (Ire).