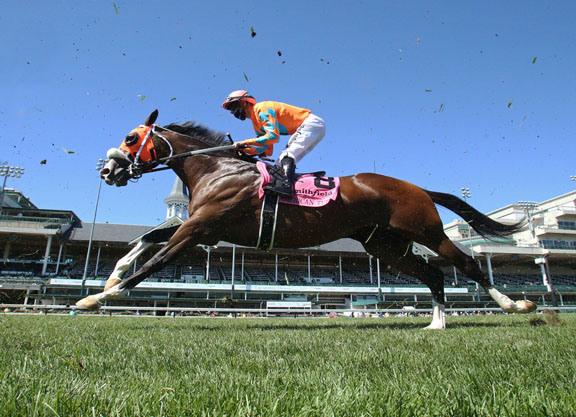 Fancy Liquor–who had employed a front-running or pressing style in each of his five prior starts–benefitted from a heady ride by red-hot Florent Geroux to pick up the pieces after a hot pace materialized.

Unhurried early from his outside draw, the dark bay sat fifth in the early going as a trio of rivals zipped away to duel through hot splits of :23.04, :46.48 and 1:11.23. Favored Smooth Like Strait (Midnight Lute) shook free of his pace foes heading for home, but he was softened up for the stretch drive, and the first to tackle him was Fancy Liquor's stablemate Field Pass. Fancy Liquor followed his stablemate's move into the lane, and struck the front with a sixteenth to run. He briefly swapped back over to his wrong lead, but kept finding to hold safe a late bid from first-time-turfer Taishan.

“This horse seems to be still learning,” said Geroux, who won five on Friday including the GI Kentucky Oaks. “He broke really well but the horses in front of me were going really fast. He's shown in the past he's run well on the lead but he doesn't necessarily have to have the lead. The race I rode aboard him at Keeneland (the Transylvania), he came from just off the pace and we got beat by Field Pass that day, but I know [Fancy Liquor] was still learning and getting better. Even back in the Jeff Ruby Steaks, where [Field Pass] beat us there, too, [Fancy Liquor] ran a really solid race.”

A narrow debut winner at Gulfstream in February, Fancy Liquor was third to Field Pass in the GIII Jeff Ruby Steaks six weeks later. Second in a local allowance June 11, he was beaten just a neck when third again behind Field Pass in the GIII Transylvania S. at Keeneland July 12, and came out on the right side of a bob in Indiana's Caesars S. over yielding sod Aug. 12.

“I wasn't expecting what we got, but it worked out. So I'm very pleased,” said first and third-finishing trainer Mike Maker. “Field Pass is a stakes winner over this course and didn't quite run his race at Saratoga. Tyler [Gaffalione] didn't feel like he handled the softer going today but still ran a good race. Flo said he was loaded, on the gallop out and everything.”

Pedigree Notes:
Fancy Liquor becomes the 36th graded winner for Lookin At Lucky, who also sired last year's GI Kentucky Derby winner via DQ Country House. These connections campaigned Fancy Liquor's dam, a speedy starter allowance type who competed mostly on turf and synthetic. She is the first mare by obscure stallion Secret Romeo, who stood in Michigan and Washington, to produce a graded winner. Brandys Secret's 2-year-old filly Miss Eau de Vie (Commissioner) was fourth in her second start here on Tuesday. Brandys Secret has a yearling filly by Tamarkuz and was bred back to Lookin At Lucky for 2021.