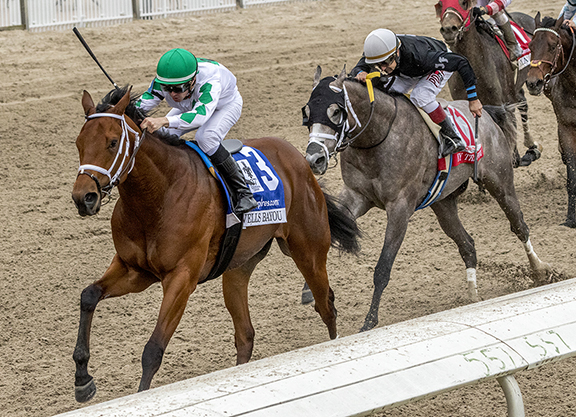 Given the clamor across social media through the week, one thing was certain heading into Saturday's GII TwinSpires.com Louisiana Derby–there was absolutely no chance that Wells Bayou (Lookin At Lucky) was going to go off at anything approaching his morning line of 8-1. Those that backed him were instead forced to swallow a price in the vicinity of 3-1, but the bay did not let them down, treating his 13 rivals to a front-running, 1 1/2-length beating.

Exiting the Feb. 17 GIII Southwest S. in which he laid down swift early fractions before sticking on gamely to be second behind Silver Prospector (Declaration of War), Wells Bayou loomed the speed of the speed and bounced very alertly from gate three. Ny Traffic (Cross Traffic) came across from his double-digit draw to apply some pressure, with Mailman Money (Goldencents) close up and GII Risen Star S. winner Modernist (Uncle Mo) three deep, but prominent. The opening couple of furlongs were traversed in :23.56, but Florent Geroux was able to get Wells Bayou to relax enough through an internal half mile in :48.86, good for a composite six-furlong split of 1:12.42, with little change in the order behind.

Clicked up by Geroux three furlongs out, Wells Bayou braced himself for a challenge from Ny Traffic, but he spurted away in upper stretch and drew further clear as Ny Traffic exhibited some punch-drunk ways in the latter stages. Modernist plugged away to be third, while Major Fed (Ghostzapper) overcame a poor start and wide run around the second turn to be a very good fourth. Enforceable (Tapit) made eye-catching progress around California raider Royal Act (American Pharoah) passing the three-furlong pole and rallied to be fifth.

“The plan was to give him another week,” trainer Brad Cox said. “This spot was more ground which we thought he would enjoy and thought he could establish the lead here. We did some homework on the race to see who was going to be running. You try to put together a game plan and sometimes it works and sometimes it doesn't. In horse racing a lot of time it doesn't. But this time it did. We are really happy with our assistants and everybody involved who do such an incredible job. We have a great team in place, and it showed today. We just have to figure out how to get him to the first Saturday in September and not May. It is uncharted territory and we will do the best we can.”

Front-running winner of his debut in the Keeneland slop Oct. 26, he retreated to seventh in a one-mile Churchill allowance over similar underfoot conditions Nov. 30 and was done for the year. He defeated his stablemate Something Natural (Violence) in a Jan. 26 Oaklawn allowance–also in the mud–and more than held his own last time, going down by just a length.

With the victory, Wells Bayou becomes the 54th stakes winner and 35th graded winner for Lookin At Lucky and is bred 4×3 to Danzig. Third dam Miasma is responsible for Mien (Nureyev), the dam of 2008 GI Kentucky Derby and GI Preakness S. hero Big Brown (Boundary). Whispering Angel, who was acquired with Wells Bayou in utero for $60,000 at Keeneland November in 2016, is the dam of the 2-year-old filly Romy (Karakontie {Jpn}) and a filly foal of 2020 by Army Mule.