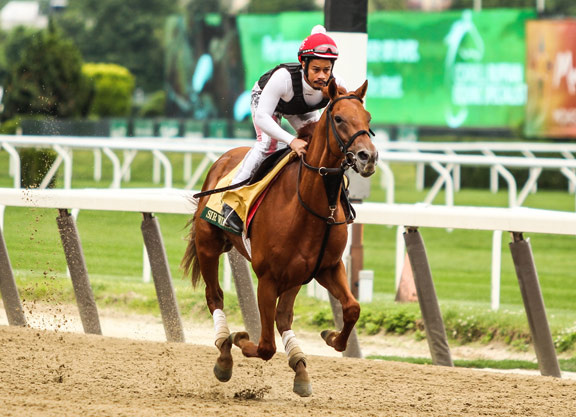 ELMONT, N.Y.–Tracy Farmer has been in the game a long time, since the seventies, and in all that time, he has accomplished quite a lot. The Kentucky native won two renewals of the GI Whitney S. (2005 and 2008) with Commentator; won the GI Jockey Club Gold Cup and a slew of other graded stakes with Albert the Great; and won several other graded events with Sun King and homebred Sir Shackleton.

The one thing Farmer has yet to accomplish in his 40 plus years in horse racing is capturing a Triple Crown race, but he hopes that will change Saturday when his homebred Sir Winston (Awesome Again) runs in the GI Belmont S.

“It would be awesome, awesome again,” Farmer quipped when asked what it would be like to win the Triple Crown's final leg.

Farmer grew up on a farm in Kentucky and always loved horses, especially Thoroughbreds. He and his wife Carol operate Shadowlawn Farm in Midway, KY, where they have over 30 mares and he has another 35 or so in training with Mark Casse, a mix of homebreds and auction purchases.

“I was raised on a tobacco farm, but I always loved Thoroughbreds, so I got in the business in like '76 or something like that,” Farmer said. “We race most of our homebreds. Sometimes we sell some. It is according to the financial condition of our operation. This year we bought quite a few, so it is always changing.”

Sir Winston is a second-generation Farmer homebred. The Navy veteran purchased his second dam Affirmed Dancer (Affirmed) as a weanling for $150,000 at Keeneland November in 1999. She was a stakes winner on dirt and Grade III-placed on turf before producing Sir Winston's graded stakes-winning and Grade I-placed dam La Gran Bailadora (Afleet Alex).

“She is a graded stakes-winning mare by Afleet Alex out of an Affirmed mare,” Farmer said. “I bred her to Awesome Again and here we are.”

When asked about the colt's name, the owner of Oxmoor Automobile Group and Tracy Farmer Enterprises, said, “I am a historian. I read Winston Churchill, so I named him Sir Winston in honor of Winston Churchill. Naming horses is a very difficult process.”

Sir Winston broke his maiden at third asking on the Woodbine synthetic Sept. 12 and was third in the GIII Grey S. there next out Oct. 21. He came back to win that venue's Display S. Dec. 8 and was fourth behind the re-opposing Tax (Arch) when making his seasonal bow in Aqueduct's GIII Withers S. Feb. 2. Off the board in the Mar. 9 GII Tampa Bay Derby and Apr. 6 GII Toyota Blue Grass S., the chestnut completed the exacta in the GIII Peter Pan S. at Belmont last time May 11.

“He ran a 100 Beyer,” Farmer said of the Peter Pan. “If he hadn't done that, he would not be in the Belmont. You never know. In the situations we have had him in, like the stakes he won in Canada, he just went. He is a horse that likes to close fast. He is bred to run all day along.”

Sir Winston will have to face the likes of Tampa Bay Derby and GII Wood Memorial S. winner Tacitus (Tapit) and his stablemate and GI Preakness S. victor War of Will (War Front) Saturday, among others.

When asked about Sir Winston's strategy for Saturday's Test of a Champion, Farmer said, “We just have to play it as it opens up. That will be up to the jockey. [Joel] Rosario rode him last time. He understands him and works him, so we will see. It is horse racing, so you never know. He is bred for the distance, has a good jockey and is doing well, so we will see.”

He added, “Someone said, 'You think you can win that Belmont?' This is another farm owner I saw at the country store. I said, 'I don't know, but I have a better chance than you do because I at least have a horse in the race.'”

As the saying goes, you have to be in it to win it, so Farmer and Sir Winston will take their best shot at Belmont glory.