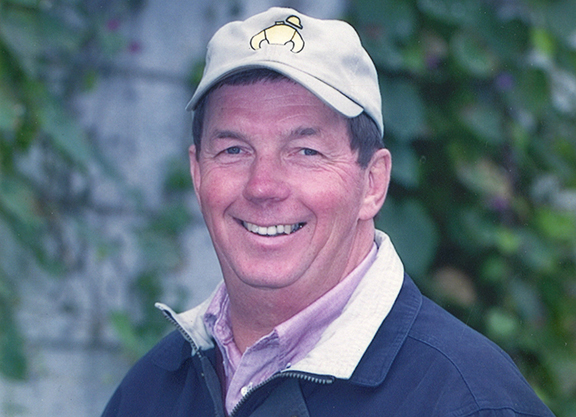 The retired longtime manager of Claiborne Farm, Koch was a Marine and a Vietnam veteran.

Koch was the subject of one of the TDN and Keeneland's Life's Work Oral History project, and Chris McGrath's story on him may be read here.

Hired when Seth Hancock took the reins at the farm, Koch was at the helm at Claiborne for 31 years, running perhaps the best lineup of stallions ever assembled. “Secretariat, of course, was the hype name for non-horse people,” Koch told McGrath in 2019. “Then we had Danzig, Mr. Prospector, and Nijinsky. Sir Ivor, Damascus. The stallions we had in that barn were just unbelievable.”

Koch grew up on a gain farm north of Cincinnati. HIs father wrote for periodicals on agriculture as well as on horse racing and auctions.

“We always had riding horses,” Koch said. “My first was a former lead pony from River Downs. Horse named Billy. I loved that horse. My dad just loved racing and we were always at the Keeneland sales, or at the old Latonia, or at a fair meet.”

He volunteered for the Marine Corps when he graduated at High School at 18 in 1966, and was sent to Vietnam in July of that year. He was stationed in Da Nang, and was honorably discharged at the end of his service. His son Matthew also served in the Marines as an intelligence officer.

His first job in the racing industry was for Charles Kenney at Stoner Creek Farm, working on the feed truck. He was exposed to Standardbreds there, and started learning about equine reproduction while working with artificial insemination. After five years, he went to work for E. P. Taylor, at Oshawa, where he worked with Natalma, Northern Dancer and The Minstrel.

In 1977, he was approached by Seth Hancock at the suggestion of Stuart Janney.

“Seth needed somebody who could handle stallions, run a breeding shed, handle broodmares,” Koch told Chris McGrath. “Do the whole thing. I just looked him in the eye and said, 'Seth, I can do this. You want some references?' He said, 'No, I'm a pretty good judge of a man.' I never asked him what he'd pay me. He never asked me what I wanted. We shook hands because both of us knew it was the right thing to do.”

For years, Koch had the pleasure of showing off the most famous racehorse in the world, Secretariat, to the thousands of tourists and dignitaries who came to the farm to see him, including Queen Elizabeth. Koch told McGrath that she had arrived with a camera around her neck, just as all the others did.

“I'd be leaving the farm on a Saturday night, and here comes a vanload of people from Michigan,” Koch said to McGrath. “'We're closed.' 'Aw, we just drove all day. We just want to see the big red horse.' And I'd walk up there and show them Secretariat. That horse could load a camera. He loved to have his picture taken. One of the most photographed horses in history, I'm sure. He just never did a thing wrong: easy to breed, easy to handle, easy to keep his weight on.”

“It's a sad day,” said Seth Hancock Saturday. “He was a whale of a man, not only was he a wonderful manager out here at the farm, but he was a wonderful father, wonderful husband, 10 kids, all of them solid citizens. Just a life well lived for sure. He was part of the family, which is a little bit unusual, because he was not from around here, he was from Ohio. He had worked a little bit at Stoner Creek Farm, but he came to us from Winfields, first in Canada, and then in Maryland.

“He wasn't a Kentucky basketball fan,” Hancock said with a laugh, “like everyone else around here is, but he quickly became part of the family just because of who he was, and the way that he lived his life and all the respect we all had for him.”

Dell Hanock recalled him similarly. “Gus was a fine person as well as a good horseman,” she said. “He was always upbeat and just delightful.”

As a parishioner at the Church of the Annunciation in Paris, Ky., he faithfully led the Rosary before Saturday evening mass for nearly 40 years, was a past Grand Knight of The Knights of Columbus (4th degree), and was past president of the Parish Council. Gus proudly served the Kentucky Thoroughbred Farm Managers' Club as president in 1987 and was honored by that group as the 2004 Farm Manager of the Year. He was also a past member of both the Bourbon County School Board and the Bourbon Community Hospital Board.

Visitation will be Tuesday, March 23, 5-8 p.m. at the Church of the Annunciation in Paris with Rosary preceding at 4:45 p.m. Rev. Daniel Fister will celebrate the Mass of Christian Burial at the church Wednesday, March 24, at 10 a.m. and live streamed on www.facebook.com/paris.cdlex. Interment will follow at Mt. Olivet Cemetery, Paris. His sons and sons-in-law will serve as pall bearers.

In lieu of flowers, donations may be made to The Horse Farm Workers' Educational Assistance Fund (www.horsefarmworkerseducationfund.com) or Church of the Annunciation Building Fund, 1007 Main St., Paris, KY, 40361