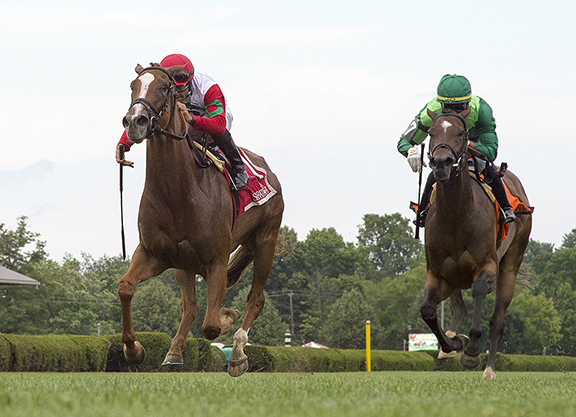 Sent off the ‘longest’ price of a trio of Chad Brown runners in a scratched-down renewal of the GIII Lake George S. at Saratoga, Paul Pompa, Jr.’s ‘TDN Rising Star’ Regal Glory (Animal Kingdom) reeled in pacesetting favorite Blowout (GB) (Dansili {GB}) in the final furlong to give Brown a third win in the race in the last five years. Dogtag (War Front), narrowly favored off her victory in the May 17 Hilltop S., checked in third.

Blowout won the break and had things very much her own way from the front as Dogtag was content to sit second with Regal Glory three deep in the breeze from last. Positions remained unchanged for the opening five-eighths of a mile, but Luis Saez began to get after Regal Glory and had her in top gear four wide off the final corner. Blowout offered some resistance when tackled in earnest a furlong down, but Regal Glory had the momentum and streaked home first as Blowout gave game chase inside. Dogtag was free of excuses in third.

Brown said, “What I did was I told all the jockeys, ‘Look, just try to ride your own race and do the best you can to win. Outside of that, if you want to talk to your individual clients or representatives that are here today, please do so and draw up a plan.’ I didn’t give any instructions other than that. I thought that was the fairest way to do it, only because it was my horses in the race.”

Romping to ‘Rising Star’-dom at first asking sprinting at Belmont last October, Regal Glory added a narrow victory in Aqueduct’s Stewart Manor S. Nov. 11 before calling it a season. Runner-up in the GIII Sweetest Chant S. at Gulfstream Feb. 3, she rallied to fill the same spot in Keeneland’s GII Appalachian S. Apr. 7 and validated dime-on-the-dollar favoritism when proving 2 3/4 lengths too strong in the June 1 Penn Oaks at Penn National.

The fourth graded winner for his Kentucky Derby-winning sire, Regal Glory is the second graded winner for her dam, whose first foal Night Prowler was a two-time graded winner for Pompa and Brown in 2015. He remained in training through his 7-year-old campaign and was third as the favorite in the Barbados Gold Cup this past March. Regal Glory, also the 35th graded winner produced by a daughter of dual-hemisphere sensation More Than Ready, has a 2-year-old half-brother by American Pharoah that was acquired by Narvick International’s Emmanuel de Seroux for $475,000 after breezing a quarter-mile in :21 1/5. Mary’s Follies foaled a colt by Candy Ride (Arg) this term.