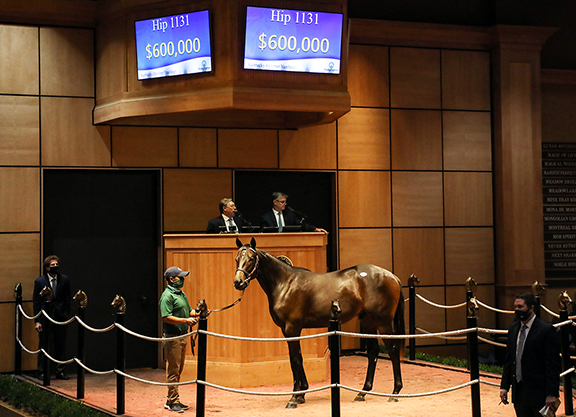 LEXINGTON, KY – During a session punctuated by several break-out horses and spirited trade seemingly throughout the market, the Fasig-Tipton Kentucky October Yearlings Sale produced strong results Wednesday. Bloodstock agent Donato Lanni, bidding on behalf of Karl and Cathi Glassman, made the auction’s highest bid so far, going to $600,000 to acquire a colt by Uncle Mo from the Lane’s End consignment.

“The smart men and women who were out there looking at horses said today was a really, really strong group of horses, particularly the top end and that was accurate,” said Fasig-Tipton President Boyd Browning. “It’s always fun to sell some expensive, top-quality horses, and we were fortunate enough to have several in our catalogue today.”

“Overall, trade continued to be good at pretty much all levels,” Browning said. “The RNA rate was down this year compared to last year, the median was up. As we came into this sale, my fear was that the bottom end of the market might be decimated–particularly with some travel restrictions in place for a lot of our friends from South America and we have virtually no Canadian participation at the sale because of the travel restrictions–but it’s held up. Nobody wants to talk about the lower end of the market, but it’s held up really well.”

Browning continued, “Clearly we sold two horses for over $500,000 so far and there is plenty of money here for a nice horse. It is continuing the trends of 2020. It’s not irrational, there is no craziness happening, but it’s a fairly consistent marketplace. And most importantly, a reasonable marketplace does exist for the men and women selling horses.”

Reiley McDonald of Eaton Sales was satisfied with the commerce conducted this week at Newtown Paddocks.

“I think the market has been very good for clean, above average horses,” McDonald said. “There are a lot of horses in the sale and the lower end horses have suffered quite a bit, but at the end of the day, that’s the nature of the horse business. I think the October sale has proven itself over the last five years to be as solid an option as there is in the country.”

Bloodstock agent Donato Lanni, shopping on behalf of Karl and Cathi Glassman for the first time at the October sale, went to a sale-topping $600,000 to acquire a colt by Uncle Mo (hip 1131)  from the Lane’s End consignment Wednesday at Fasig-Tipton. The yearling, bred by Kinsman Farm, was bought back at $325,000 at the Keeneland September sale. He is out of A. P. Dream (A.P. Indy) and is a half to multiple group placed Wind Fire (Distorted Humor). Out of multiple Grade I winner Dream Supreme (Seeking the Gold), the mare is a full-sister to Grade I winner Majestic Warrior.

“He’s an Uncle Mo with a good pedigree,” Lanni said of the youngster. “He’s a nice horse and he had all the criteria Mr. Glassman wanted. He was locked in and they really wanted the horse. We’re just happy to get him.”

Karl Glassman is chairman of the board of the Missouri-based manufacturing company Leggett & Platt, Inc. He and his wife campaigned stakes winner April Gaze (High Cotton), as well as stakes-placed current 2-year-old Restofthestory (Jess’s Dream) with trainer Eddie Plesa.

The Glassmans also purchased a filly by Distorted Humor (hip 124) for $140,000 during Monday’s first session of the October sale.

“He was certainly a nice colt and we’re happy to have him,” said Spendthrift manager Ned Toffey. “He does look a lot like Into Mischief. He stands over a lot of ground and he’s marked similarly. He’s a nice colt.”

Of the yearling’s final price, Toffey said, “It’s Into Mischief, nothing surprises me. He just continues to amaze us year after year. We thought we’d have to pay something for him. That was probably somewhere beyond where we thought we’d need to be, but if he can run it will look cheap.”

The Florida-bred yearling is out of Ashlee’s Lady (Gilded Time) and is a half-brother to graded winner Yara (Put It Back). Ashlee’s Lady is a half to Grade I winner Healthy Addiction (Boston Harbor). He was consigned by Paramount Sales and was co-bred by Paramount’s Gabriel Duignan and Jean White’s Bulldog Racing.

“It was a foal share with Jean White,” Duignan said. “She had the mare, she did all the work and she needs all the credit. She did a great job with the horse. She brought him to me at the sale and I did the easy part. He’s a lovely and I’m very happy with that result.”

Ashlee’s Lady has a weanling filly by Violence bred by White in partnership with Steven Marshall’s Black Rock Thoroughbreds, which campaigned that stallion.

Tom D’Ambra’s Trade Winds Farm added a son of Mohaymen to its roster Wednesday at Fasig-Tipton when bloodstock agent Frank Smith made a final bid of $315,000 to secure a first-crop yearling of the graded stakes winner (hip 844) from the Hunter Valley Farm consignment.

“His pedigree,” Smith, owner of Elloree Training Center in South Carolina, said when asked what had attracted him to the yearling. “The Tapits look like they want to run no matter who they are. The mare has had a Grade I horse, so she’s proven herself, too. That’s about as good as you’ll find in today’s sale.”

The gray colt is out of Super Phoebe (Malabar Gold), the dam of multiple Grade I winner Got Stormy (Get Stormy).

The yearlings will be trained by Dale Romans.

Hip 844 was a pinhooking score for the partnership of Ted Campion, Gabriel Duignan, Adrian Regan and Pat Costello, which purchased the gray colt for $145,000 at last year’s Fasig-Tipton November sale.

“He was just a beautiful mover,” Campion said of his impressions of the colt as a weanling. “He had all the pieces in the right places. Spider [Duignan], Adrian, myself and Pat buy 10 or 12 horses a year and we just all landed on him last year and we all loved him. He just got stronger and in the last month he’s done really, really well.”

Of his placement in the October sale, Campion added, “He’s a May 10 foal and he really thrived in the last month. Just physically, he needed that extra month. He was nice in September, but he has grown in the last month.”

The colt is Mohaymen’s highest-priced yearling to date.

“I actually was underbidder on two of them last year,” Campion said of the Shadwell stallion. “They looked very precocious. I know this guy is a late foal, but I bet he’ll be a nice 2-year-old–maybe he won’t be April early, but middle of the summer, I bet he’ll be very good. I thought they were very athletic and he was a good racehorse. And for a son of Tapit, they’ve got great minds.”

Reiley McDonald included a small group of homebred fillies among his Eaton Sales consignment at the October sale and the well-received group was highlighted by a daughter of Maclean’s Music (hip 1040) who sold to Richard Rigney on a phone bid of $280,000 Wednesday in Lexington.

“She was always a very nice filly,” McDonald said. “As a weanling, we knew she was something special, but she’s done nothing but get better the entire time.”

The chestnut filly is out of multiple stakes-placed Wind Caper (Touch Gold) and is a half-sister to stakes-placed Travelling Midas (Quality Road). McDonald’s Athens Woods purchased the mare for $37,000 at the 2016 Keeneland November sale.

Of the yearling’s final price, McDonald said, “It would have shocked me to death when I brought her in here, but she was so pretty and she showed herself so well, that I thought she could bring $200,000 to $300,000 by the time we got here today. I had 47 vet hits on her. We had to cut her scopes off. She was just a solid, clean filly.”

McDonald, who maintains a broodmare band of some 20 head, also sold a homebred daughter of Lookin at Lucky (hip 229) for $150,000 during Monday’s first session of the auction.

“I held some of my lesser bred homebreds that I really liked for this sale,” McDonald said. “It’s turned out to be a very good sale for clean, nice horses, so I’m glad I did it.”

Shack Parish’s Indian Creek consignment had a pair of standout results back-to-back Wednesday at Fasig-Tipton, with Vinnie Viola’s St Elias Stables securing a colt by Distorted Humor (hip 1067) with a $270,000 internet bid and just a few hips later What Time Is It Racing paying that same amount for a daughter of More Than Ready (hip 1079).

“Both of these horses were May foals, so we just wanted to give them as much time as possible,” explained Indian Creek’s Sarah Sutherland. “That’s why they came here.”

Of the results, Sutherland added, “We knew they had been well received, but you never know where they will land. So we try to place them and reserve them where we can people involved to bid. They are here to sell.”

Hip 1067 is a son of stakes winner and multiple graded placed You Bought Her (Graeme Hall). The yearling was bred by Meg Dumaine, who purchased the mare for $250,000 at the 2017 Keeneland November sale.

“We had hoped she would be in this range, but she definitely exceeded our expectations a bit,” Sutherland said. “It’s a beautiful pedigree that suits end users well and it’s an active family as well with Sweet Melania.”

Trainer Dan Blacker and bloodstock agent Conor Foley did their bidding upstairs for the filly, purchasing her on behalf of a fledgling owner who races as What Time Is It Racing.

“He has six or seven now,” Blacker said, while declining to name the client. “We have a mixture of yearlings, 2-year-olds and older horses. He’s just really passionate about the Thoroughbred business and he’s really excited to get involved in all aspects. I am really thrilled to get this filly.”

Asked what type of horses they were seeking for the operation, Foley said, “I think just the best athlete possible. And sometimes for a nice pedigree you have to pay a little more.”

It was the second time this fall Blacker had purchased a filly from an Indian Creek consignment for What Time Is It Racing. He went to $1.1 million to acquire a filly by Medaglia d’Oro (hip 443) at the Keeneland September sale.

What Time Is It Racing has one starter to date, Johan Zoffani (Ire) (Zoffany {Ire}), a 3-year-old European import who was fifth in his stateside debut at Del Mar in August. The gelding is expected to go postward again this Sunday in a maiden race at the oceanside oval.

Larry Rivelli has been active at Fasig-Tipton this week purchasing yearlings on behalf of Vince Foglia’s Patricia’s Hope and the trainer made his highest bid of the auction when going to $235,000 to secure a colt from the first crop of champion Gun Runner.

“I think it’s slim picking at this sale and you are digging through a lot of horses, but this was a beautiful horse,” Rivelli said after signing the ticket on hip 813. “Except for being gray, he looks a lot like Gun Runner.”

The yearling, bred by Nancy Shuford, is out of stakes-placed Stayclassysandiego (Rockport Harbor) and is a half-brother to multiple graded stakes winner Pretty N Cool (Scat Daddy).

“We have had a little bit of luck with Rockport Harbor as a broodmare sire,” Rivelli said. “So we were taking a shot. I was prepared to pay in between $150,000 and $250,000. The horse vetted clean and that’s 75% of it. I’m pretty particular on scoping. The throat has to be perfect because if there is a little bit of this or that, it’s only going to get worse, in my eyes.”