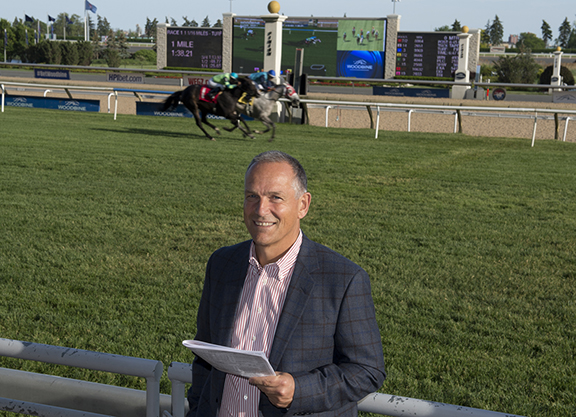 The experimental rules regarding whipping that were in place during the final two months of the 2019 Woodbine meet will likely become permanent in 2020, Woodbine CEO Jim Lawson said on this week's TDN Writers' Room podcast, presented by Keeneland. Starting Oct. 18 and running through the end of the meet on Dec. 15. Woodbine riders were prohibited from striking horses with an overhanded motion. The rules were considered the most restrictive in North America when it comes to whipping.

The Alcohol and Gaming Commission of Ontario (AGCO) will have the final say on the whipping rules. But expectations are it will approve whatever Woodbine recommends.

“On the whipping rules, I have every reason to believe we are going to leave the urging rules that we had at the end of the meet last year as the status quo,” said Lawson, who was the Green Group Guest of the Week. “I think it was a successful experiment. We didn't have any big issues. As everyone appreciates, the rules were in large part a reaction to public perception. More importantly, I think it's better for the horses. Not allowing that overhanded whaling on a horse, as we've seen historically, is just better all the way around. It wasn't trouble free in the sense that the jockeys didn't like it and a number of them still won't like it. But they have learned to adapt. We did not have a lot of problems or complaints from our customers, so, all in all, we regarded it as a successful experiment.”

The 2020 Woodbine meet, which begins April 18, will likely also include new rules regarding disqualifications. Woodbine has applied to the AGCO to go to the Category 1 system regarding interference. Under Category 1 a horse is disqualified only when the stewards believe the horse that was impeded would have finished ahead of the horse who caused the foul. The Category 1 system is in place in most racing jurisdictions, other than the U.S. and Canada.

North American racing currently uses the Category 2 system, whereby a horse is disqualified if the stewards believe its infraction affected the outcome of the race in any way.

“We're of the view that we'd like to see North American go to Category 1 interference rules,” Lawson said.. “Our wagering customers like it better and we think it is a better rule. We think it makes more sense and we are hoping we will see Canada, and certainly Ontario, go to Category 1 interference rules. The AGCO has completed a survey and before the season starts they will make a decision. This is an example of how we're trying to do things differently. We hope other jurisdictions in the U.S. will follow our lead.”

On the News of the Week segment, sponsored by West Point Thoroughbreds, the writers discussed the late changes to the to weights in races last weekend at the Fair Grounds, Bob Baffert's embarrassment of riches when it comes to 3-year-old colts and the road to the GI Kentucky Oaks.

The podcast is now available.