Lion Taming Shows Even Stallions Can Start Over 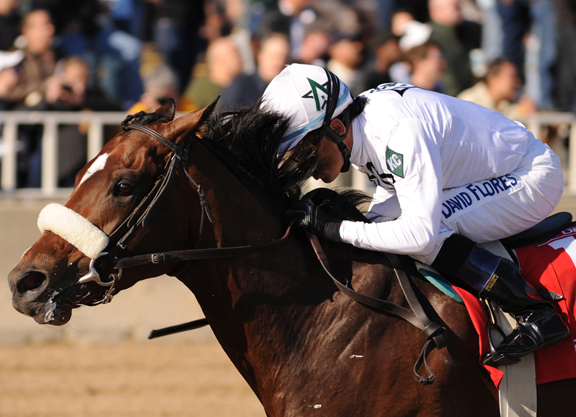 He wasn't just any horse. In 2010, he finished midfield in the GI Kentucky Derby. To those who have taken American Lion in hand now, however, that's the whole point: no horse is just any horse. Because they believe every retired Thoroughbred needs treating like a champion. Each one is bred on the same premise: in the hope that they, too, can become graded stakes winners and maybe even go to stud, as did this son of Tiznow at Darby Dan seven years ago. But it's not as though a horse can ever let us down. It was our idea, and the consequences–for richer, for poorer–are our responsibility.

All that said, the niche American Lion carved in public attention during his racing days qualifies him as something of a beacon to help light the racing community's path out of the aftercare darkness. Moreover, the relative class that set him apart from the herd, in his first career, is also serving him well in his moment of redemption.

It is barely two months since American Lion was fighting for his life in a Lexington clinic. After leaving Darby Dan, he had served a stint in Oklahoma but had entered Four Star's consignment for the Keeneland November Sale when falling sick.

“He came in with a little bit of a temperature, which is not unusual for horses shipping a distance, but very soon he was going downhill very rapidly,” recalls Tony Lacy of Four Star. “We called Hagyard [Equine Medical Institute], and Luke Fallon and his staff came out. The horse had severe pneumonia, with some really significant side-effects. We knew, at that point, we had to get the horse into the hospital. He was very ill, very quickly. The conversation was no longer will the horse be able to return to the sale. It was basically will he make it?”

Since entering their barn, however, American Lion had so enchanted the Four Star team that Lacy and Kerry Cauthen assured his vendor that he need not worry about the accumulating bills.

“You could see that the horse was really looking for help,” Lacy says. “It's sort of weird to say it like that, but he was just reaching out. All our staff at the barn were really concerned about him. You could see the kindness in the horse's eye, could see that he was a gentleman. So this became a team effort from all the crew. Hagyard rallied round as well: Dr. Barry David, who was taking care of him, was very supportive; Luke also. It became a group mission.”

Happily, American Lion was brought back from the brink. WinStar took him aboard for his recuperation, and Lacy emphasizes his debt to the work of Natanya Nieman and her team there. But the question was: what next? As he has previously been owned by a major supporter of Old Friends, in Bill Casner, it was made plain that there would ultimately be a home for the horse there, if required. But he was still so sprightly, at 12, so full of vigor and character. Surely there was still scope for a new lease of life?

Lacy, who sits on the board of New Vocations, contacted the retraining facility's manager Anna Ford. “For such a cool horse, we thought it a perfect scenario,” he says. “A way of giving him a chance to flourish at something different.”

American Lion was gelded just before Christmas and it was remarkable, last week, to watch him jog around the indoor school, snorting cheerfully as he obediently switched directions or stepped over a pole with insouciance.

“First day he walks in our barn, you could just see the class all over,” Ford says. “Working with him under saddle is exactly what we see when we get a horse that's very well bred and has a great race record. Horses able to make it to that top level, they have a little bit of a different mind. And a lot of them obviously have been handled very well throughout their lifetime.”

It helped that he had been ridden off-season through his time at Darby Dan. As a result, there was no traumatic confusion that he was rolling back the clock nine years, to his training days. Ford says that within three or four mornings under tack he was more tuned into the regime than many recruits more or less straight from the track.

Nonetheless, in posting him for adoption New Vocations will be applying all their usual rigour to the screening process. He will require fairly seasoned management, in terms of monitoring his reaction to females and so on.

A stallion will always be a special case. Ford says that their responses are too individual to permit any guarantees. Last year, however, New Vocations had success with Grade II winner Overdriven (Tale Of The Cat), since adopted as a showhorse. And American Lion's behaviour hitherto has been most auspicious, bonding affectionately with the farm's resident “babysitting” gelding Ranger, who is very much built to teach manners in the paddock.

Nonetheless American Lion remains a pretty uncommon challenge. One of his own foals, after all, is already on a New Vocations program. Yet with his bone and soundness, his balance and size, and above all that exceptionally flexible outlook, Ford envisages him in disciplines such as hunting or eventing or even dressage.

“We do feel like he needs to go on and be very productive,” she says. “He acts like a horse that really wants to have a job, not just to sit in a backyard and be trail-ridden. With his movement and style, I would say jumping would be his best suit. Horses of his calibre don't tend to be easily spooked or worried. To compete at that level, to do all the things they're asked to do, they have to have confidence.

“And the thing that stands out is his awareness of what's going on, his ability stay calm and cool. He's like, 'Just tell me what to do, I'll do it.' We haven't seen him ask: 'Why do you want me to do this?' He's got that nice, easy disposition. Whatever you throw at him, he's an athlete. It's like, 'Yeah, I can do this.' If he doesn't know how to do it, you tell him how-and he just picks it up and goes.”

His unusual assets as a racehorse, then, have also made American Lion unusually adept at transition. His personality, also, evidently helped inspire the goodwill and generosity of those in whose hands he happened to be, when overtaken by crisis. But the key message is that the moral challenge set by this very special horse is actually a universal one, no less pertinent to Thoroughbreds of less or even zero distinction.

“In the industry we gain a good lifestyle and a good livelihood from horses,” Lacy says. “I think it's our moral duty to get behind them in situations [like this]. Economics is obviously a huge factor, but we felt in our gut we just had to do it. He was just such a cool, kind horse, everybody had an affiliation with him. It'll be fun to watch him going on to the next level. It's not fun paying vet bills on a horse you're going to give away, but it has its own reward: it almost feels selfish, really, it makes you feel so good. I'm excited to see where he might end up, because I know Anna and her team do such a great job. Again, I could not thank the crew at Hagyards and WinStar enough. There's a lot of good karma around this.”