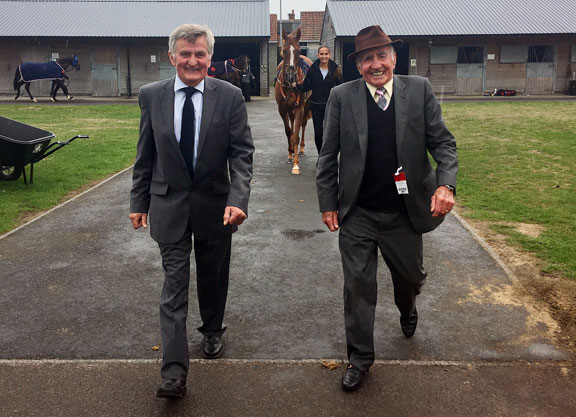 One of the many problems confronting racing the world over appears to be the difficulty of attracting young people into the sport in a hands-on role. While there remains an over-supply of would-be racing managers and bloodstock agents, trainers worldwide will tell you that young people just don't seem to want to work within stables any more.

An hour or two spent in the company of Cliff Lines could, though, change all that.

A universally-respected trainer based in Exning on the northern edge of Newmarket Heath, Lines, 83, saddled his final runner on Wednesday when 4-year-old gelding Catapult (GB) (Equiano {Fr}) scored a fitting and emotional victory in a handicap at Lingfield, thus bringing the curtain down on a 69-year career within the sport. As he reflects on his seven decades in racing, he avows, “I've had a great life; I couldn't have had a better one.”

Born in February 1935 in Edinburgh (where his father, a soldier in the Scots Greys, was stationed) Lines grew up in south-west London, whither his father, having joined the RAF, had been transferred. The family had no racing connection. However, the mother of one of his school-friends (“he had brains – he went to university and ended up a professor”) made the familiar remark which has prompted so many boys to join the game over the years: “You're small: you should be a jockey.” As it happened, Lines's mother worked in Job's Dairy, where one of her colleagues was an ex-jockey. On the Lineses' behalf he wrote to Noel Murless, who was training at Beckhampton at the time, and the young Cliff Lines was duly packed off to Wiltshire at the age of 14, one of 22 apprentices in the stable. Another of the indentured youngsters was a local boy from nearby Calne called Clive Brittain who, of course, went on to become one of Newmarket's leading trainers, famous as the first British-based handler to send out both a Breeders' Cup winner and a G1 Japan Cup winner.

In the autumn of 1952, Noel Murless moved from Beckhampton to Warren Place, Newmarket. Cliff Lines was mid-way through his apprenticeship at the time (having signed on for an initial five years, a term which was subsequently extended to seven) and Newmarket has been his home more or less ever since. During his apprenticeship, he rode a couple of winners for Murless (one owned by The Queen, the other by Sir Victor Sassoon) and he still harboured aspirations to be a jockey once his apprenticeship had finished. Consequently he moved away for three years to further this ambition, spending two years with Joe Hartigan in Cheshire and one with Toby Balding in Hampshire. The story behind this foray, incidentally, bears re-telling. “I was riding a lovely 2-year-old filly every day. I thought she would be very good. But there was one lad in the yard, a good friend of mine, who kept on at me that I should give it another go race-riding, and he kept telling me that he could fix up a job for me with Joe Hartigan. Finally I agreed, and off I went. It was only later that I wondered whether perhaps he had had an ulterior motive because I found out that he rode the filly in all her work for the rest of her career.”

The filly in question, it turns out, was none other than Petite Etoile (GB) (Petition {GB}) who, of course, still ranks as one of the greatest fillies ever to have graced the British turf.

His race-riding dream having finally died, Cliff Lines returned to Newmarket after word was passed to him at Newbury races one afternoon that there was a job with a house available for him if he wanted it, working in Lagrange Stables for Major Lionel Holliday, then one of Britain's leading owner/breeders. Major Holliday employed a succession of private trainers. Dick Hern was at the helm when he arrived, and subsequently Walter Wharton held the post. Lines spent six years there, initially working for Hern (for whom he rode the 1962 St Leger winner Hethersett (GB) (Hugh Lupus {Fr}) in his work) and subsequently for Wharton. He reflects, “Major Holliday was a very good man and an excellent employer. It was a very good job and I would have stayed there forever if he hadn't died.”

Following his employer's death, however, the stable was gradually wound down and Lines returned to Warren Place, where he remained one of Murless's key members of staff until the trainer's retirement at the end of the 1976 season, riding most of the stable's greatest horses in their work including 1967 Derby winner Royal Palace (GB) (Ballymoss {Ire}).

As the autumn of 1976 drew to a close, Newmarket was rife with rumours that nine-time champion trainer Murless, who had already announced that he would retire and hand over the stable to his son-in-law Henry Cecil, would carry on training half a dozen horses for one reason alone: to prepare the brilliant J O Tobin (Never Bend) for the following season's Classics. When Murless eventually decided to stick to his original plan, J O Tobin's American owner/breeder George Pope decided to bring the colt back to the States as he didn't want him trained in England by anyone else; and he asked Lines, who had ridden the colt in all his work as a juvenile, to accompany him. Lines relates, “I had accepted a job with Michael Stoute but I asked him if that could be put on hold while I went with J O Tobin, and he kindly agreed. He would definitely have won the 2000 Guineas if he had stayed in England, and the Derby too if Lester could have ridden him, but off we went to California. We were in John Adams's barn in Santa Anita and he started off really well, winning the Swaps S., but unfortunately when we went to New York it just didn't suit him. He was never happy there and didn't relax, didn't thrive.”

Cliff Lines joined Michael Stoute on his return to England, taking up the post as head lad in the trainer's main yard, Freemason Lodge. However, it is as Stoute's principal work-rider that Lines is arguably best remembered, partnering not only the wide-margin 1981 Derby winner Shergar (Ire) (Great Nephew {GB}) in his work but also many other high-class horses including Sonic Lady (Nureyev), Shareef Dancer (Northern Dancer) and Hard Fought (Ire) (Habitat), the latter coincidentally owned by Major Holliday's son Brook. In 1987, however, Lines submitted to the urge to be his own boss, buying Marsh Stables in Exning and setting up as a breaker and pre-trainer, with Michael Stoute as his principal client. When the pre-training went a bit quiet a few years later, he took out a trainer's license to augment that business, and it has been as a trainer that Lines has played his most recent role in the racing game. For the past eight years he has been operating out of Hethersett Stables, the property which he built after selling the bulk of Marsh Stables while retaining a couple of paddocks.

Cliff Lines's energy and enthusiasm belie his years, and it has only been in the past year that he has stopped riding his hack at exercise with his small string. However, the lot of a small trainer is not an easy one, as he reflects: “I'm lucky as I have two very good riders who have been helping me out, but staff is a big problem for all trainers nowadays. And the finances too. Everything costs so much nowadays. I looked after a horse of The Queen's who won a little race at Thirsk in 1956 or '57, and the prize money was £500. Now we're racing for £2,000, and it's 60 years later.”

Cliff Lines and his wife Sue are such popular figures within Newmarket that they will still be firmly on the radar, both locally and also in Malaysia where his son Richard has been champion trainer for the past eight years. If Cliff has seen the world in his racing life (which he has), Richard has done so even more. Having divided his apprenticeship between one-time Murless assistant William Hastings-Bass (now Lord Huntingdon) in Newmarket and Neville Begg in Sydney, Richard then rode successfully as a jockey in Australia, Macau and Singapore before becoming a trainer, initially in Penang and latterly in Kuala Lumpur.

The retirement of Cliff Lines really is the end of an era. Times change, but the training of racehorses basically remains the same. In an age in which we seem to be struggling to attract youngsters to work in the sport, it is so heartening to hear him look back on nearly 70 years in the game and reflect, “I wouldn't have changed it for anything.”