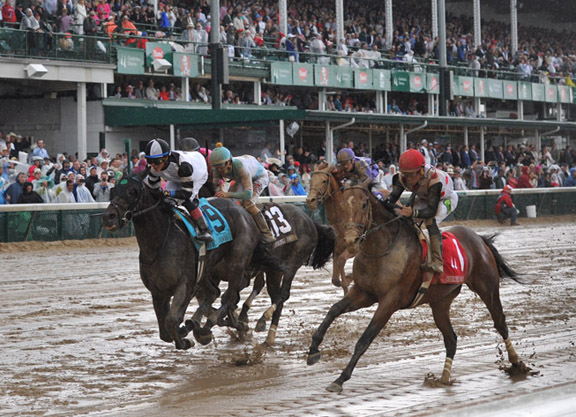 Limousine Liberal had been knocking on the door at the graded level for a while, and finally busted his way through Saturday in what was his first race over anything but a fast track.

Pushed hard from the gate to vie for the early lead, he was outfooted by favorite Masochistic (Sought After) and longshot Bluegrass Singer (Bluegrass Cat) but found a perfect spot stalking those two through splits of :22.04 and :44.35. He ranged up three deep to put a head in front, but seemed to be idling in midstretch as Tom's Ready charged down the outside and Awesome Slew dove to the rail. The latter kept on coming to cut it very close, and might have gotten it done if not for getting stuck in traffic down the lane.

“It was perfect–he broke and I used him a little bit to get my position,” said Jose Ortiz, who rode Paulassilverlining (Ghostzapper) to victory earlier on the card in the female equivalent of this–the GI Humana Distaff. “When I saw [Bluegrass Singer] go with Masochistic, my chances increased a lot because I was in a good spot. When we entered in the stretch, he responded very well. It was a great training job by Ben [Colebrook]. He told me to just try to sit two lengths off Masochistic. That's what I did and it worked.”

Limousine Liberal first passed the class test when second to eventual champion sprinter Runhappy (Super Saver) in the 2015 GI King's Bishop S., and missed by a neck in that year's GIII Gallant Bob S. Sixth here 12 months ago, his close calls would continue when second by a head in the 2016 GIII Aristides S. the following month. He was also second in Gulfstream's GII Smile Sprint S. in July, and came a nose short of upsetting MGISW A.P. Indian (Indian Charlie) in Keeneland's GII Phoenix S. in October. Moved up from fifth to fourth after Masochistic's DQ in the Nov. 5 GI Breeders' Cup Sprint Nov. 5, he was most recently third behind Awesome Slew and A.P. Indian in the GIII Commonwealth S. back in Lexington Apr. 8.

“It set up for us,” said Colebrook. “It kind of went according to plan for once. The plan was just to follow the two speed horses and try to pounce. We've been waiting to get a wet track and it worked out. This horse has been showing up every time. It's great that he's finally a graded stakes winner.”

Co-breeder Mike Ball's parents Don and Mira Ball purchased Limousine Liberal's dam for $110,000 at the 2006 Keeneland September sale under their Donamire Farm banner. Katherine “K.K” Ball trained her to her best career finish–a runner-up effort in maiden special weight company at Keeneland in 2008–but she went winless in eight starts. Limousine Liberal is the only foal out of Gift of Gab, who is a full-sister to GSW Uncle Denny.