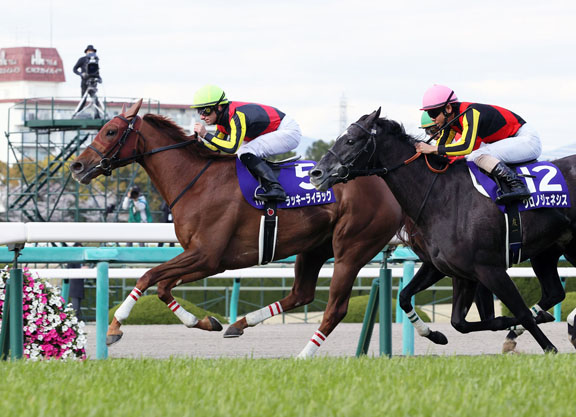 “After her last race, she went to Northern Farm Shigaraki, and although restrictions on movement meant I wasn't able to check on her, she has come back looking really well,” said trainer Mikio Matsunaga. “Her form is good, and she has filled out in a way that really makes her look bigger and stronger.”

Mirco Demuro, who will accompany Lucky Lilac, gets the chance to win his third Group 1 title this year.

Chrono Genesis (Jpn) (Bago {Fr}) recorded her most important career win in Kyoto's G1 Shuka Sho last October before crossing the wire fifth-behind winner Lucky Lilac-in the Queen Elizabeth II Cup. Bouncing back over a yielding turf course to take the Feb. 16 G2 Kyoto Kinen, the 4-year-old found only Lucky Lilac a neck too good in the Osaka Hai and looks to turn the tables on that rival here.

“Last time she drew a wide gate, but quickly got into a position where she settled into stride well. She finished second in the end, but showed her ability, which has definitely improved as she's gotten older,” said trainer Takashi Saito. “She returned from the farm on June 5, and is the type to pick up quickly in training.” The Sunday Racing Co.'s runner will once again be accompanied by her regular rider, Yuichi Kitamura.

“He was helped last time by the lack of noise due to no spectators, and everything went smoothly before the race. He adjusted well to the slow pace, and ran out a comfortable winner,” said assistant trainer Takashi Kotaki of the 2018 G1 Hopeful S. victor. “He's been at the farm since, but on his return to the stable, he's been his usual self as he prepared for this race.” Jockey Christophe Lemaire returns on Saturnalia.