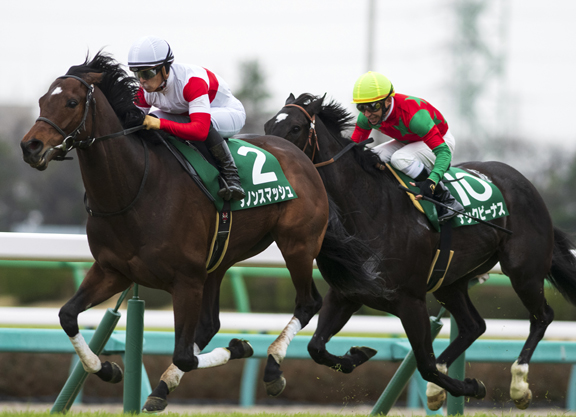 Danon Smash (Jpn) finally broke through at the highest level in Japan with a neck defeat of boom mare Resistencia (Jpn) (Daiwa Major {Jpn}) in Chukyo's G1 Takamatsunomiya Kinen on Sunday.  The Danox Inc. colourbearer followed in his sire's hoofprints, who captured the 1200-metre grass feature in 2013.

Sent off at 5-1, the Takayuki Yasuda trainee assumed position off the fence near the back of the field as the 2020 Takamatsunomiya Kinen winner Mozu Superflare (Speightstown) rocketed straight to the front. That rival remained glued to the fence and set sharp fractions of :22.90 and :45.60 despite the yielding going while on an uncontested lead. Winding up for his run, Danon Smash began to make encouraging progress, cut between Resistencia and a rival at the 200-metre mark and found his way to the line a neck on top.

Group 1 winner Resistencia, favoured at 9-5, spun fairly wide into the stretch, appeared to briefly struggle with the deep ground as the rain continued, before gamely picking up and holding for second. Indy Champ (Jpn) (Stay Gold {Jpn}), who had taken over from Mozu Superflare briefly nearer the fence was a neck back in third. Mozu Superflare hung on for fifth.

“I knew that the ground condition was going to be the key factor but I decided not to make any plan and let the horse race where he wants to,” said pilot Yuga Kawada. “We were able to race while eyeing Resistencia in the front. He responded really well at the fourth corner and, although there was a long duel (with the race favorite) at the stretch, he showed his strength at the end. Last year's result (10th) was very disappointing so I'm really glad he was able to register his first Group 1 title in Japan.”

A potential return to Hong Kong for a start in the G1 Chairman's Sprint Prize on Apr. 25 is a possibility for Danon Smash. Resistencia also holds an entry for that Sha Tin feature.

As a juvenile, Danon Smash won two of four starts including the Momiji S., but saved his first group win for the G3 Keihan Hai S. in November of his 3-year-old season. Among his starts as a 4-year-old, the entire ran fourth in the 2019 Takamatsunomiya Kinen and later that season was third in the G1 Sprinters S. in September of 2019. Last term, he saluted the judge four times in seven starts, with a first in the G2 Sankei Sho Centaur S. followed by a runner-up performance in the Sprinters S. and he captured his first Group 1 on foreign soil with a win in the Longines Hong Kong Sprint at Sha Tin on Dec. 13. Sunday's victory was his 6-year-old bow.

Danon Smash is one of five Group 1 winners and 17 group winners for rising sire star Lord Kanaloa (Jpn) (King Kamehameha {Jpn}), who is in the process of assuming the Shadai Stallion Station kingpin mantle after the passing of star sires Deep Impact (Jpn) and King Kamehameha (Jpn). In addition to each winning the Takamatsunomiya Kinen, the father-son duo also share a win apiece in the aforementioned Hong Kong Sprint.

His dam, Spinning Wildcat, was plucked for $600,000 by KI Farm out of the Fasig-Tipton November Sale in 2013 in foal to Tapit. That foal was the subsequent winning filly Menuett (Jpn), who saluted over 1600 metres on dirt as a 4-year-old and delivered a filly by Lord Kanaloa as her first foal this spring. Danon Smash is Spinning Wildcat's second foal and one of five winners from five to race. Danon Smash has full-siblings–a juvenile filly and yearling colt who have yet to race, while Spinning Wildcat was covered by Heart's Cry (Jpn) last spring.