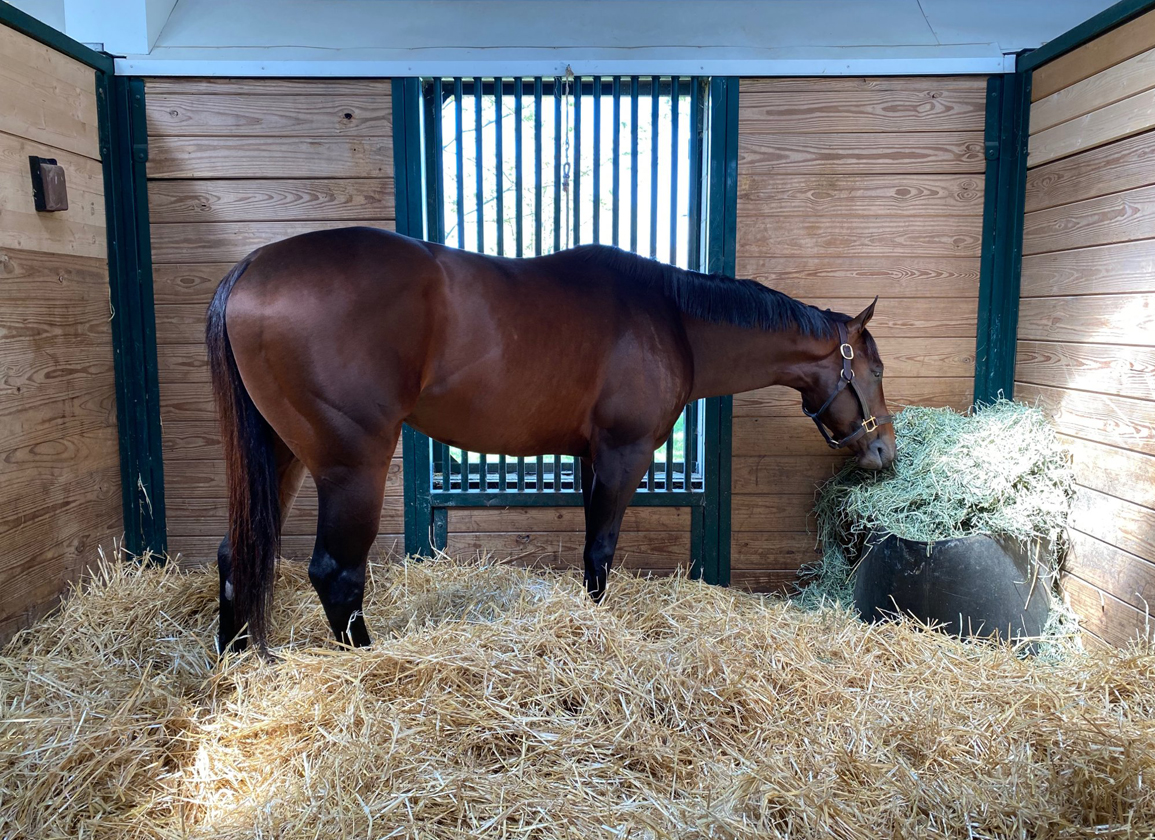 Life Is Good (Into Mischief) and Country Grammer (Tonalist), both multiple Grade I winners co-owned by WinStar Farm, are enjoying a freshening at WinStar's training and rehabilitation facility in Versailles, Ky. before they return to the racetrack for their summer campaigns. Rivals in their last start in the G1 Dubai World Cup, the duo now shares the same daily routine on the farm. After training at 6:30 every morning, they keep company together as they enjoy the grass and sunshine in side-by-side round pens.

“Life Is Good and Country Grammer arrived shortly after the Dubai World Cup,” WinStar Farm Trainer Destin Heath said. “They were able to quarantine in Louisville at a new quarantine facility, which is a change from years past.  We were able to check on them while they were there and now they've settled back into their normal routine here at WinStar. We've been letting them do their thing–keep a little bit of fitness, but be a horse. They both train early in the morning so they have ample time to go outside.”

With consecutive Grade I wins in the Breeders' Cup Dirt Mile and Pegasus World Cup Invitational S., 'TDN Rising Star' Life is Good was the heavy favorite in the Dubai World Cup, but Country Grammer, who was coming off a second-place finish in the G1 Saudi Cup, closed in the final furlong to get the victory.

“We all thought Life Is Good was a cinch,” Heath admitted. “I'll be honest, that was my main rooting interest. But Country Grammer coming through and winning the race was pretty special for us and the crew here at the training barn.”

Country Grammer spent a brief stint at WinStar after he was purchased as a 2-year-old by Paul Pompa in 2019 and he returned after his 3-year-old campaign that was marked by a win in the GIII Peter Pan S. After Pompa's passing in 2020, the colt sold to WinStar Farm for $110,000 at the 2021 Keeneland January Sale and was sent to Bob Baffert in California, where got his first Grade I victory last year in the Hollywood Gold Cup S.

Life is Good has also spent a good deal of time at WinStar's training center. The $525,000 Keeneland September purchase was part of WinStar's breaking program.

“Life Is Good is pretty special,” Heath said. “He was easy to break and was forward from day one. [WinStar Rehabilitation and Breaking Manager] Terry Arnold told me from day one that he was the best one of the bunch and he was spot on with that. We've always been high on him and he's never really done anything wrong. We just had to manage him to not go too fast in his early stages.”

Heath notes Life is Good's Pegasus victory as his most impressive win so far, but he first points to the talented bay's first-ever defeat last year in the GI H. Allen Jerkens Memorial S., where he ran second off a layoff after a battle with Jackie's Warrior (Maclean's Music), as the race he and his team are most proud of.

“He was with us for quite a bit last spring after he got injured and came off the Derby trail,” Heath said. “It was pretty special to see him run in a Grade I just 47 days after shipping out. That was a thrill even in defeat.”

While there was never a question of Life is Good's brilliance as 3-year-old, Heath said he is even more confident in the champion's ability now as an older horse.

“As a 4-year-old, he's a little bit more professional about things,” Heath explained. “He knows his job and he knows what to do. We just have to keep him in a routine to where he's happy and healthy. I think we've got him figured out now. He just likes to go out and be a racehorse.” 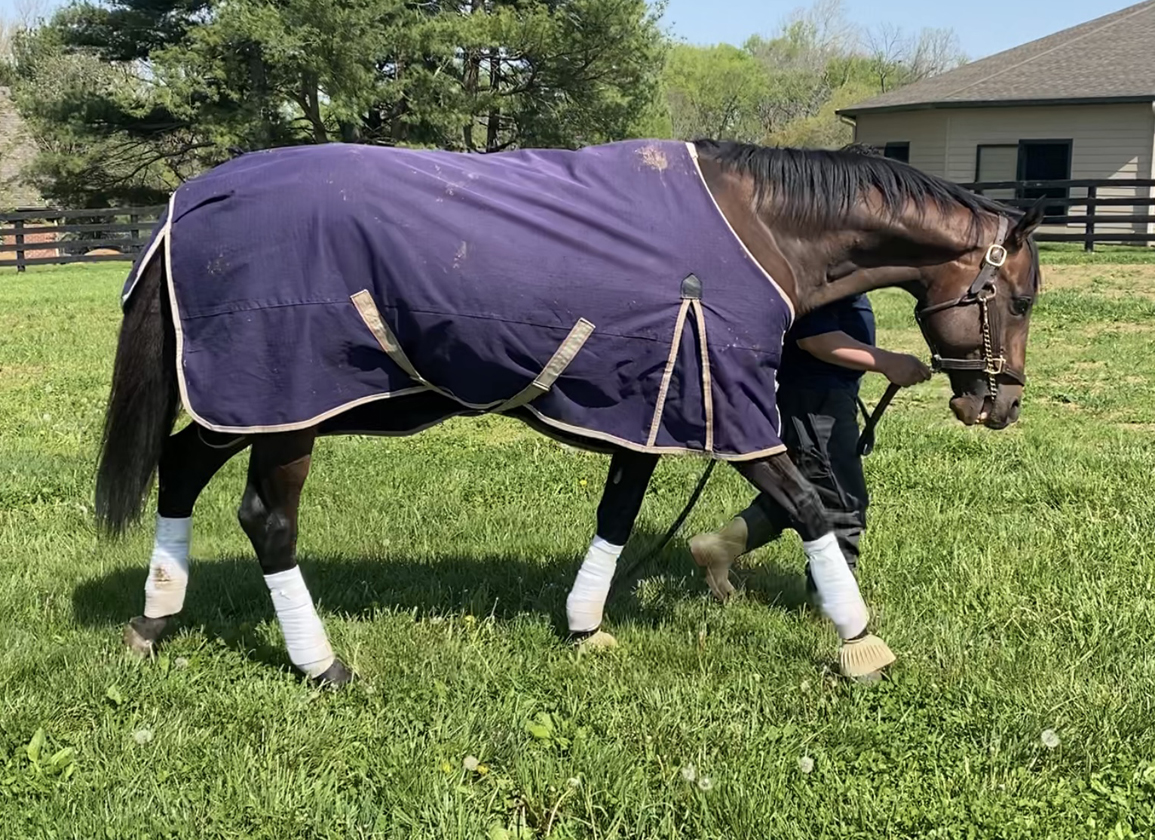 Heath said that Country Grammer is equally professional on the racetrack, but not quite as easygoing as his stablemate on the ground.

“He knows that he's all man,” Heath said. “You've got to set your scenarios up every morning with the right riders and grooms to make sure he's not going to tell them who's boss. Turned out, he's a little bit more of a ham and a little bit more animated. He plays and has a good time out there, but on the track he's the consummate professional. He never turns a hair and really enjoys his job.”

Heath, who first came to Kentucky in 2005 to work for D. Wayne Lukas and took on the role of head trainer at WinStar in 2018, is no stranger to working with top-class horses at WinStar with a long list of graduates that includes superstars Justify, Monomoy Girl, Songbird, Improbable, Midnight Bisou and Always Dreaming.

“It's pretty special to have horses of that caliber,” Heath said. “The incredible horses in the barn are easy to have. They know their job and they know their routine. I just try to stay out of their way and let them do their thing. I know I never take a day for granted here and I know the crew doesn't either.”

No specific plans are set yet as to when Life Is Good and Country Grammer will ship out in the coming weeks. Country Grammer's trainer Bob Baffert is currently serving a 90-day suspension for the betamethasone positive in last year's Kentucky Derby, but Heath said the 5-year-old bay will be pointing toward Del Mar. Meanwhile Life Is Good will head to Todd Pletcher to target the Saratoga race meet.

“We're going to leave it up to the individual horse and the timeline for the year,” he explained. “We'll let them decide when they're ready to get back to the races. It's all up to the horse.”