Letter to the Editor: Tanya Gunther on the Mare Cap 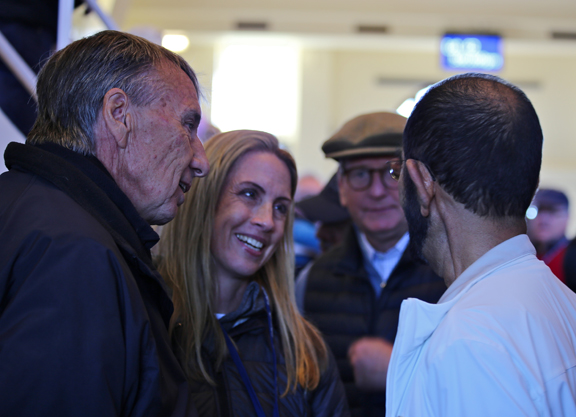 The Jockey Club's unilateral decision to regulate the market by imposing a mare cap on the breeding industry during a period of time when the sport of horse racing has been left staggering breathlessly against the ropes following a series of jabs, crosses and uppercuts, intensifies my fears about the future of our industry. That The Jockey Club chose to deliver this edict amid a global health crisis that threatens to bring many small breeders and operators to their knees, delivers a telling body blow.

On the topic of the mare cap itself, the pros and cons from various industry participants have been captured and relayed by the media quite thoroughly since The Jockey Club floated its intentions in September 2019 (see TDN archives from Sept. 7, 2019 onward), so I won't recap them all here (no pun intended). While I favour a market economy approach where the forces of supply and demand determine quantities and prices and where stallion owners can establish their business models as they see fit (with many having already implemented a cap of their own accord), I can see some merit regarding concerns from the other side of the fence, specifically with respect to the issue of genetic diversity. However, without the inflow of diverse bloodlines, I have serious doubts that a cap on the number of mares bred provides a solution and I have many concerns regarding the unintended consequences of this landscape-changing decision, not the least of which is its impact on our global competitiveness.

In a TDN story published Sept. 6, 2019, The Jockey Club President James Gagliano was quoted as saying “We cannot predict the economic effects of a limitation because of the complexity of the interactions among participants in the breeding and selling markets.” With this lack of visibility regarding the financial consequences of a cap, you might expect some hesitation regarding the implementation of a change of this magnitude until greater clarity had been achieved. The way I see it, our entire bloodstock was just handed a haircut during a time when a decent haircut (i.e. not DIY lockdown locks) has literally been hard to come by. By 'haircut', I refer to the lowering of the value of our bloodstock. If you believe that colts born in 2021 and beyond will be worth less due to decreased valuations for stallion prospects resulting from a reduction in the key variable of how many mares a stallion is permitted to breed each year, then this value destruction will also carry over to our fillies and mares. From a purely financial perspective, a mare is worth the net present value of the cash flows she is expected to produce in the future. Therefore, with expected cash flows lowered thanks to the mare cap, our mares are now worth less. Fortunately, we are involved in this industry because horse racing is our passion, though as small breeders we still need to make the economics work.

The breeding business can be characterized as one filled with irrational hope and the certainty of disappointment. From my personal perspective, hope is fuelled in large part by the excitement I feel about our mating plans and what results we might achieve from our ideas. With the mare cap, we will inevitably be required to satisfice more often. We have managed to rework mating plans in the past when faced with the occasional rejecting comments such as 'unfortunately your mare was not approved' and 'is this the best [mare you] can offer, as I would not be hopeful of getting a place for her' but these types of responses to our nomination requests can be expected to increase several-fold. Does this bode well for our hopes and dreams or will we be more likely to wade deeper into the pool of disappointment? It does not stand to reason that the cap will prove beneficial to our business if we are forced to make plans that are not our first preferences (i.e. not in our best judgement) and to create a product in which we have a lower degree of confidence due to sub-optimal mating plans and the increased use of unproven stallions and/or stallions with weaker credentials.

In 2014, we bred an unproven mare with lower-case black-type credentials to a stallion that bred a book of 202 mares. In the same year, we bred an unproven mare with no black-type in her racing credentials to a stallion that bred 152 mares. If the cap had affected breeding plans in that year, our two mares possibly would have been among those shut out and the racing world would be minus one Triple Crown winner in Justify (Scat Daddy) and would have greeted a different horse than Vino Rosso (Curlin) into the winner's circle for the 2019 Breeders' Cup Classic.

Irrespective of which side of the fence you're on regarding the cap or whether you're straddling the fence with mixed sentiments, one matter that should be of concern to everyone is the fact that The Jockey Club made the decision to regulate our industry in this way without any formal consultation process with industry participants and without any rigorous stress-testing and scenario modelling, at least not that was publicly disclosed. It made me wonder how The Jockey Club has this level of control over how we conduct our businesses, where it can dictate rules without our collective consent and neglect key issues despite our collective insistence.

According to an excerpt from the 'History' section of The Jockey Club's website: “The Jockey Club received a certificate of incorporation from the State of New York on February 9, 1894, but the real genesis of the organization took place two months earlier when eight 'patrons of the turf' convened in New York City. The eight racing leaders, chaired by James R. Keene, aimed to create an association that would ensure order instead of the growing chaos of racing. They adopted a resolution that read, in part, that the purpose of the organization would be 'not only to encourage the development of the thoroughbred horse, but to establish racing on such a footing that it may command the interests as well as the confidence and favorable opinion of the public.'”

While defense of the cap may take cover under the purpose development of the Thoroughbred horse, I have to ask what is the point of pursuing changes of this nature if we don't address the health of the sport of horse racing as a first priority? The public has no confidence in our ability to police ourselves or to keep our horses safe. In recent times, we have commanded the interests of the public primarily through negative publicity that has bolstered the public's disdain for our sport. A reflection on 2019 and 2020 YTD, as unpalatable as some of what transpired may be, makes one fact abundantly clear: We are in a state of chaos right now.

If we allow the sport of horse racing to continue on its present trajectory, the ongoing debate over the mare cap becomes academic and rather pointless. If The Jockey Club sees fit to overreach in the area of development of the Thoroughbred horse, perhaps it could throw its weight around toward the purpose of ensuring we have a viable and thriving industry where ancillary concerns such as the mare cap may continue to matter.