Letter to the Editor: Shelley Blodgett on Hurricane Maria 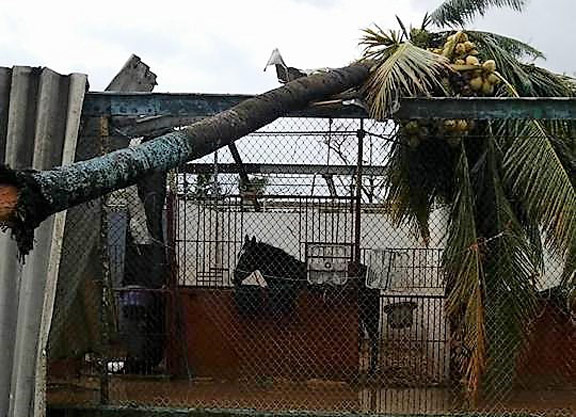 In Saturday's TDN we reported on the situation at Camarero Racetrack due to Hurricane Maria (click here to view the story). Shelley Blodgett, founder of the Caribbean Thoroughbred Aftercare Inc., wrote the following response to the TDN to further explain the severity of the situation and ask for help from the industry. Blodgett also sent all of the photos and graphics included.

I am Shelley Blodgett, co-founder of Caribbean Thoroughbred Aftercare Inc, a non-profit (501c3) that helps Thoroughbreds racing in Puerto Rico and the U.S. Virgin Islands. I think there is a story that needs to get out.

There are 864 U.S. Thoroughbreds (all Jockey Club registered) stabled at Hipodromo Camarero Racetrack in Canóvanas, Puerto Rico. The racetrack, including the barns, was heavily damaged during Hurricane Maria. Further, the horses cannot leave their stalls due to debris, downed fencing and flooding. They are standing in water, and there is NO clean water or hay. I was told that they are giving them some grain (presumably without water). No horses died during the storm, but some needed stitches and such.

I learned this from a brief phone call from CTA co-founder, Kelley Stobie (the call was disconnected). She is at the track seven days a week, working as an equine therapist. She toured the track and spoke with the backstretch supervisor, some owners, trainer and vets. She told me the situation is dire and there is no way to get needed water, hay and medical supplies right now.

There is more to the story, but I'll leave it at that for now. I've attached some photos I managed to get from the La Escuelita Hípica (the Jockey School at the track); they help with the track horses and posted this and have commented on the situation. Kelley also has photos, but cannot get them to me.

More than half of the Thoroughbreds in Puerto Rico were bred in the States. I have a line graph of numbers for both Puerto Rican-bred and U.S.-bred. There are some good horses there, including 2012 GI Belmont S. runner and 2013 Maxxam Gold Cup winner Unstoppable U, as well as Arch Traveler (who was also on the Triple Crown trail early in his career) and Becky's Kitten. We gathered data and determined that 1,500 people have a stake in the racing industry in Puerto Rico (see pie chart). Thus, these horses are essential to the well being of many people in Puerto Rico.

I do not believe that there has been any formal request by the Puerto Rican government to help the horses at that time, but I have been working to rattle the bushes and get things moving. I have spoken with a veterinarian, who is an equine disaster response specialist and on the National Veterinary Response Team, but they cannot help until there is an official request to FEMA from the Puerto Rican government official. Also, I've spoken with the Secretary of Agriculture for U.S.V.I., Carlos Robles, but he has not been able to make contact with his counterpart in Puerto Rico, though I know he has sent him an email.

There are about 200 Thoroughbreds in St. Croix, including race horses and breeding farms, and there are 40 Thoroughbreds racing in St. Thomas and many OTTBs in rescue/aftercare as well. Mr. Robles is assessing the situation in U.S.V.I. and trying to initiate needed federal help down there. I have tried calling all of the CTA board members, which include a prominent breeder, an equine veterinarian and an attorney, but all cell service is out. Further, I've called the Racetrack Administrator, Jose Maymo, but his cell phone isn't in service.

We really need the racing industry and other equine organizations in the States to help urgently as there is little time to waste. These horses survived the storm, but are facing dehydration, starvation and risk of secondary health issues (e.g., colic, infection) due to the environmental hazards and lack of basic needs. These are U.S. horses. They do their jobs faithfully as racehorses and deserve better. They support the livelihood of many in the islands. Thank You.