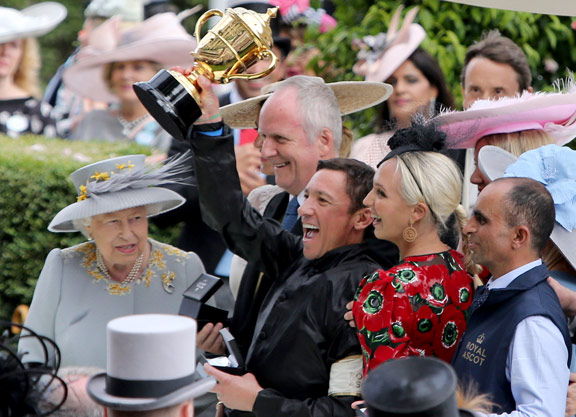 With the first Democratic debate next week, and the 2020 election seemingly nearer than that date, one marvels at how big this sport is in this small country. One reason is because of Queen Elizabeth II.

Hard to imagine that she has been coming to this race meeting every year, in person for 47 years! And she is not just a spectator, but an owner. Hey, she loves the game, just like her mother did. Word is, like her mum, she also wagers. And she has had 23 winners at this Royal Ascot meeting alone, and could add to that total before Saturday evening.

The weather cleared Thursday afternoon, but the first announcement brought a cloud over my handicapping. Wesley Ward had one of the favorites for the G2 Norfolk S., but because of all the rain Wednesday, he scratched Maven (American Pharoah) because of the soft ground. Ward will keep the 2-year-old on the continent for a race in France next month.

With the defection of Maven, it was an easier task for jockey Frankie Dettori to win the opener on A'Ali (Society Rock {Ire}). Then Frankie took the second race, the G3 Hampton Court S. on Sangarius (Kingman {GB}).

When I was at Santa Anita I noticed a pattern that when jockeys won two races, they seemed to ride a greater percentage of winners that day going for the hat trick. A study then showed that something good happens in the mind and body of a rider going for their third winner of the day. They are on the top of the game, both mentally and physically. The winning percentage for that jockey jumps to almost double for consequent rides.

It happened immediately for Dettori. He won the third race, the G2 Ribblesdale S. (the Ascot Oaks) with Star Catcher (Sea The Stars {GB}) for trainer John Gosden. Star Catcher paid $11.90 to win on Twinspires.com. Not bad for a must play.

In my limited study, jocks going for their fourth winner of the day find their percentages drop. But that was not the scenario for Frankie. The 48-year-old phenom won the signature event of the meet, the G1 Gold Cup on Stradivarius (Sea The Stars {GB}) again for Gosden. He had no room until the home straight, then the canny Italian found a seam to burst through. Magnificent horsemanship for 2 1/2 miles. It might be the smallest actual trophy of the meet, but it means the most.

The Queen handed out the hardware, beaming and laughing as she greeted the trainer and jockey. It was Frankie's seventh victory in this historic event.

You can imagine how great the percentages are against a rider winning five-of-five any day. The man of the moment looked to be a hero again, but in the fifth, with less than half a furlong to go, Harry Bentley on Biometric (Bated Breath {GB}) caught Dettori and won the Britannia S. (Class 2).

In 1878 Freddie Archer was the only rider in history to win five races in one day of The Royal Meeting. On Thursday in the finale, The King George V S. (Handicap) (Class 2) trainer Aidan O'Brien finished 1-2-3 at the winning post, with South Pacific (Galileo {GB}) leading the team home. Frankie finished far, far back, even though he was clearly the star of the day.

I have witnessed many Triple Crowns and many Breeders' Cups, but I have never felt an entire racetrack behind a rider like today. It seemed no matter what your bet, you wanted Frankie to win that fifth straight race.

Two more days of the Royal meeting to go, but this is a day all race fans will never forget. And neither will Frankie.