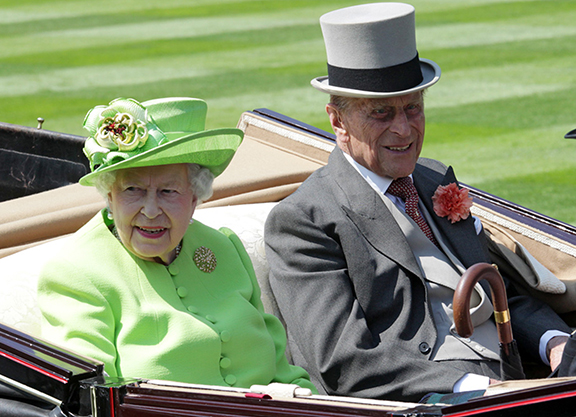 Can you ever remember a memorial minute of silence at a racetrack? I can’t. But just after Queen Elizabeth and Prince Philip arrived via royal Landau carriage pulled by four white horses, the hurly-burly in every area of Ascot came to a halt in an eerie silence.

In memory of the recent terror attacks in Manchester and London, plus the tragic Grenfell tower fire, the Queen led tens of thousands of racing fans paying their respects.

Because of the recent problems, I have noticed a much larger security presence (i.e. lots of soldiers, lots of guns).

So as jockey John Velazquez was waiting for his baggage at Heathrow this morning, after taking the red eye from John F. Kennedy Airport, he was afraid to answer his cell phone, which rang loudly and incessantly. He saw there were lots of soldiers and lots of guns near the baggage carrousel.

Finally, he got through customs, and found that it was trainer Wesley Ward calling to tell him that he was needed to fill in for Frankie Dettori on his star 3-year-old filly, ‘TDN Rising Star’ Lady Aurelia (Scat Daddy). Johnny was scheduled to ride in two other events Tuesday afternoon.

Frankie has not recovered from an arm injury suffered last week at Yarmouth, and will miss the entire week.

Velazquez was driven directly to the race course, where eight years ago, he scored his first Royal Ascot victory aboard Ward’s 33-1 shot Strike the Tiger (Tiger Ridge) in the Windsor Castle S.

With Dettori not riding, the price moved up a bit on track to 7-2, and at post time, Lady Aurelia, the early favorite, the only 3-year-old in the race, was now second choice.

As the field of 17 sprung from the gate in the five-furlong Group 1 King’s Stand S., Lady Aurelia was off a beat slowly, but Johnny settled her down and moved strongly into the final two furlongs.

Then he opened her up. Like a switchblade. Fast and powerful. Sharp and dangerous. Watching from the press box, I could hear audible gasps, then praise, then applause and disbelief behind me.

It was not record time. It was one-hundredth of a second short of the course record! Even with the tardy beginning.

The trophy was presented by Prince William and Princess Kate.

Tuesday was just another day at the office for Wesley and Johnny.

For the Wednesday card, I will use my preferred and proven handicapping attack for finding a winner in European races: the jockey-trainer combination.

In the Group 2 Queen Mary S., the fact that the Ward-trained Happy Like A Fool (Distorted Humor)–who won her debut impressively Apr. 9 at Keeneland–has attracted Ryan Moore to take the call is all I need. Moore has been the leading rider at Royal Ascot for six of the last seven years and reports of Happy Like a Fool’s excellent morning workouts must have reached him.

In the Group 1 Prince of Wales S., I find my favorite betting combination in trainer John Gosden and jockey William Buick. In my opinion, Buick is the very best rider in England today, and I expect him to meet Gosden in the winners enclosure after a ten-furlong tussle with world traveler Highland Reel (Ire) (Galileo {Ire}).