Letter from Ascot: History Lesson from a Legend 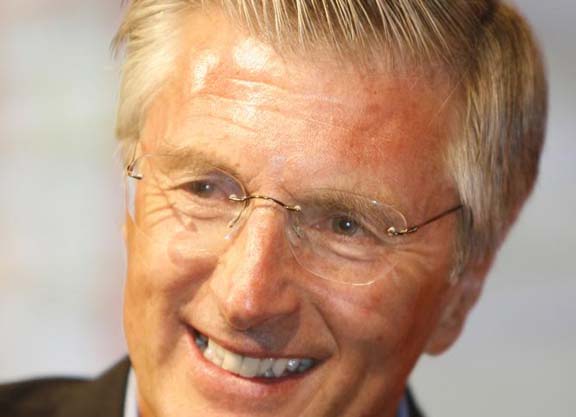 Michael Dickinson is a great horse trainer. He is known on both sides of the Atlantic because of some extraordinary feats. But his knowledge of horse racing and the people involved is why I got an email from him last week.

He was an amateur champion rider, then a professional jockey in England for more than a decade. But it was what he accomplished on the track that got him in the Guinness Book of Records.

In the United States, his almost unbelievable work with Da Hoss is still a legend not likely to be matched. He trained the horse to win the 1996 and 1998 Breeders' Cup Mile despite the horse only having had one race in between, owing to injury!

So, when Michael sent me an email, I took note! I had mentioned in a column for TDN last week that Jean Cruget, winner of the Triple Crown on Seattle Slew, was the only flat rider that I knew, who had also ridden in a steeplechase event.

Wow, was I wrong! It seems that many of today's leading jockeys in England and France were also stars over the jumps before they moved their tack to Thoroughbred tracks.

Michael pointed out that Jim Crowley, champion U.K. flat rider of 2016, had ridden for more than 10 years over the jumps before switching to the flat.

Ryan Moore, who with five winners last week captured the riding crown for the Royal Ascot meet this year, rode his first winner over the jumps on Mersey Beat for his father in 2000. Joe Fanning and Graham Lee, riding flat races this week in Great Britain, both started winning races in steeplechase events.

Christophe Soumillion has been known primarily as an international flat riding star. He was crowned French champion jockey on more than one occasion, but after that went on to win the French Champion Hurdle of 2010.

But the biggest surprise from Micheal Dickinson was about the the master of them all, Lester Piggott. Lester rode more than 20 winners over the jumps. Piggott, now 92 years old, is considered by many the greatest jockey in the history of horse racing.

It was great to stand corrected, if for nothing more than to celebrate the great training career of Michael Dickinson and the outstanding accomplishments of jockeys who can ride on the flat and over the jumps.