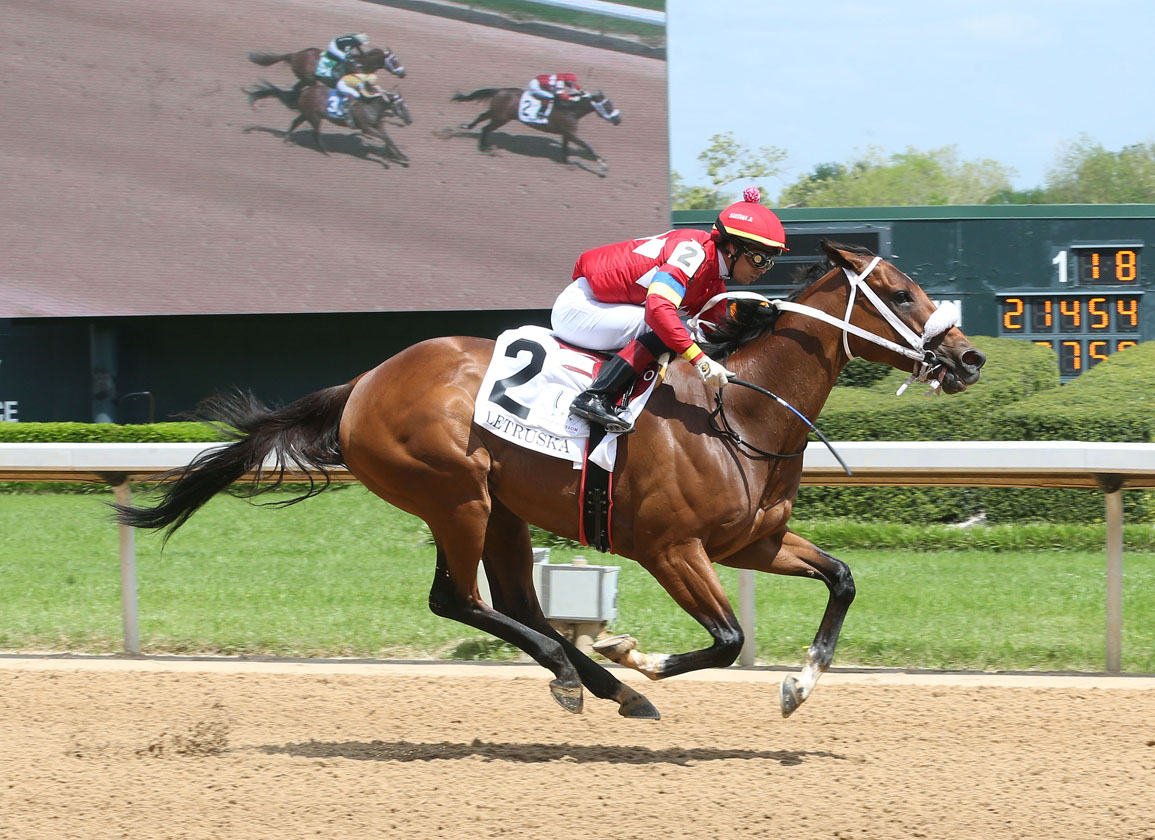 St George Stable's Letruska (Super Saver) added her name to a select group in defense of her title in Saturday's GI Apple Blossom H. at Oaklawn Park, joining the legendary Paseana (Arg), Azeri and Zenyatta as multiple winners of the track's signature event for the dirt distaff set. In winning for a remarkable 19th time in her 25-race career, the 6-year-old reigning Eclipse Award winner held off a late bid from Clairiere (Curlin) and fellow champion Ce Ce (Elusive Quality), herself an ultra-game winner of this race in the early throes of the COVID-19 outbreak two years ago.

Off as the 9-10 chalk, Letruska came out a bit at the break and bothered Clairiere slightly, but was unchallenged for the early lead and took the quintet into the first turn while charting a course three off the inside in advance of 63-1 Miss Imperial (Maclean's Music).

Allowed to lob them along down the backstretch through a relatively easy half-mile in :47.26, the 6-year-old led the Apple Blossom field into the turn, but soon had to brace for a challenge from Ce Ce, who was niggled along approaching the half-mile marker, but rolled up outside with about 2 1/2 furlongs to travel. In the meantime, last year's GI Cotillion S. heroine Clairiere had quietly crept into contention, followed the move of Ce Ce off the second turn and peeled out with a menacing three-wide challenge of her own in upper stretch. For a few strides, it appeared as if her momentum might carry her by Letruska, but the champ dug in–veering out into the path of Ce Ce, but never causing her to break stride or Victor Espinoza to cease riding–and was home first. Clairiere closed off well for second as the field crossed the wire in odds order.

The 2021 Apple Blossom was a coming-out party of sorts for Letruska, who caught the attention of most racing fans with a nose defeat of multiple champion Monomoy Girl (Tapizar) after losing the lead at midstretch. From there, the homebred rattled off victories in the GI Odgen Phipps S., the GII Fleur de Lis S., the GI Personal Ensign S. and GI Juddmonte Spinster S., locking up a championship prior to Breeders' Cup Saturday. The bay retreated to beat just one home at Del Mar in November after chasing a suicidal pace, but, kept in training for 2022, resumed with a smooth three-length tally in Gulfstream's GIII Royal Delta S. Feb. 26.

“This horse is different,” said winning trainer Fausto Gutierrez. “To win the Apple Blossom twice is great. This was a handicap and now we're giving weight, you have to remember that.”

“When we won the Apple Blossom last year, Monomoy [Girl] was giving us weight,” he continued. “All the time I'm nervous with these races. She's come back in good form and now we're thinking about the next race.”

St George Stables acquired the Grade II-placed Magic Appeal carrying the foal that would become Letruska for $100,000 at the 2015 Keeneland November Sale and has since gone on to become the dam of the late Trigger Warning (Candy Ride {Arg}), a two-time stakes winner and third at cricket-score odds behind McKinzie in the 2018 GI Pennsylvania Derby.

Letruska's 3-year-old homebred half-brother Ocotzingo (Hard Spun) broke his maiden over the Gulfstream synthetic track Apr. 15, and Magic Appeal is also responsible for the 2-year-old colt Prudencio (Arrogate) and a yearling filly by Malibu Moon. The mare was most recently covered by Curlin.