Lemon Lives Up To Big Pedigree 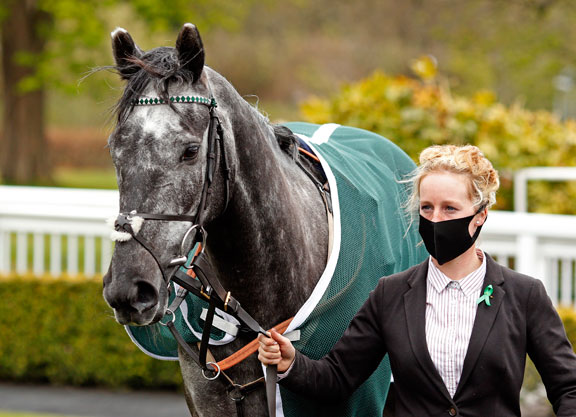 When the gates sprang open for Saturday's Listed Oaks Trial Fillies' S. at Lingfield, Sherbet Lemon (Lemon Drop Kid) wasn't aware of her odds–which, at 28-1, where the longest in the eight-filly field. And while it may have come as a surprise to many when she dug in late over the soft course to overhaul more fancied rivals, the grey was simply doing what her substantial pedigree suggested she should.

The name Lemon Drop Kid may not turn many heads in Europe, but Lane's End's five time Grade I-winning relative of A.P. Indy–who was pensioned from stud duty in January after covering until the age of 24 last year–has carved out a considerable reputation on both sides of the Atlantic.

Lemon Drop Kid–who has thus far provided nine Grade/Group 1 winners which represent a near-equal mix of dirt and turf specialists–is best known on these shores as the sire of the Sir Michael Stoute-trained Cannock Chase, winner of the GI Canadian International as well as the G3 Huxley S. and G3 Tercentenary S., as well as his Tercentenary and G2 Prix Eugene Adam-winning full-brother Pisco Sour and Ron Arculli's multiple group winner Red Verdon. Lemon Drop Kid's progeny have been admirably diverse: he sired the 2006 GI Kentucky Oaks winner Lemons Forever; Beach Patrol, the winner of three Grade Is over middle distances on the turf; and the hard-knocking Richard's Kid, winner of two GI Pacific Classics and the GI Goodwood S. Lemon Drop Kid has provided the GI Spinster S. winner Romantic Vision out of a daughter of Giant's Causeway; the GI Ashland S. winner Christmas Kid out of a Green Desert mare and the GI Diana S. scorer Somali Lemonade out of a daughter of Nureyev.

Lemon Drop Kid himself was among the leaders of his generation on the racetrack. Bred by Will Farish and W.S. Kilroy, he has a pedigree very much in the purple; he shares a second dam with the same breeders' legendary sire A.P. Indy, and like that son of Seattle Slew he achieved Classic glory in the GI Belmont S.–one of five Grade I wins on the dirt for Lemon Drop Kid which also included the Futurity S. at two, the Travers, the Whitney and the Woodward.

Lemon Drop Kid was a dirt phenom who was never tried on the turf, but it is plain to see why so many of his progeny relish the green; his pedigree is one that has effortlessly criss-crossed the Atlantic for generations. Lemon Drop's kid's fifth dam is the Irish Oaks winner Uvira II (Umidwar {GB}), who was bred by the third Aga Khan and exported to the U.S. in 1941 after being bought by Emerson Woodward. Uvira changed hands on numerous occasions after arriving in the U.S., but richly rewarded her various owners by producing not only five stakes-winning colts, but a myriad of influential daughters, chief among those Missy Baba (My Babu). Missy Baba emulated her dam by carving out a legacy through her daughters. Various branches of Missy Baba's descendants have produced the likes of American Horse of the Year Havre de Grace (Saint Liam), GI Belmont S. winner Tonalist (Tapit) and GI Flower Bowl Invitational S. winner Riskaverse (Dynaformer)–all three of those out great-granddaughters of Missy Baba–and the 2017 Canadian champion 3-year-old filly and multiple graded stakes winner Holy Helena (Ghostzapper).

Just as significantly, Lemon Drop Kid is a son of Kingmambo, who blends dirt and turf brilliance through his own sire Mr. Prospector and dam Miesque who, like her first two dams before her, was born in the U.S. but excelled in France and beyond.

The propensity of Lemon Drop Kid's progeny has been split nearly evenly between dirt and turf, with 52 of his foals having won black-type races on the dirt and 56 on turf. At the time he was pensioned in early January, Lemon Drop Kid ranked 11th by earnings on the TDN's list of cumulative leading active sires in North America–an indication of his enduring potency as a sire–and today he is on the cusp of two milestones: Sherbet Lemon was Lemon Drop Kid's 99th stakes winner, and his total progeny earnings sits at a shade over $99-million. He is also building a considerable reputation as a broodmare sire: his daughters have produced 74 stakes winners, their 13 Grade I winners including four-time top-level scorer Forever Unbridled (Unbridled's Song); last year's GI Turf Classic S. scorer Digital Age (Ire) (Invincible Spirit {Ire}); G1 St James's Palace S. victor and young Newsells Park sire Without Parole (GB) (Frankel {GB}); and four-time Group 1 winner Elusive Kate (Elusive Quality). Lemon Drop Kid's influence could be felt on British shores again this summer should the G1 Al Quoz Sprint winner Extravagant Kid (Kiss The Kid) take up his entry in the G1 King's Stand S. or G1 Diamond Jubilee S. at Royal Ascot; he is by Lemon Drop Kid's dual Grade III-winning son Kiss The Kid.

In selecting Lemon Drop Kid as the second mating for Sherbet Lemon's dam, Famous (Ire) (Danehill Dancer {Ire}), after importing her from Ireland in 2015, Greg Goodman of Mt Brilliant Farm in Lexington, Kentucky–famously the birthplace of Man O'War–gave Famous an excellent chance to get a stone cold runner and, with the resulting foal being a filly, a potential broodmare with all the right ingredients.

Famous herself was bred by Lynch Bages and raced in the colours of Derrick Smith after she was secured by Demi O'Byrne for €1-million at the 2008 Goffs Million sale. Famous would have had considerable residual value even had she not placed in the G1 Moyglare Stud S., being a full-sister to the Group 1 Phoenix S., National S., 2000 Guineas and St James's Palace S. winner Mastercraftsman (Ire) and a half to the GIII Locust Grove H. winner Genuine Devotion (Ire) (Rock Of Gibraltar {Ire}). The family, which also includes G1 Prix de l'Arc de Triomphe and G1 Juddmonte International victor Sakhee (Bahri) and dual Grade I scorer River Memories (Riverman), has continued to blossom in recent years, with the likes of G2 Zipping Classic and G2 Middleton S. scorer Beautiful Romance (GB) (New Approach {Ire}) appearing under the second dam.

Famous was secured privately by Mt Brilliant at the end of her racing career and kept at Coolmore with a small band of Goodman's mares. She visited Galileo (Ire) her first five years at stud, her first foals yielding two minor winners. Incidentally, it was after Famous touched down in the U.S. that she took off: her first American-born foal was the Galileo colt Il Paradiso, who was scooped up by MV Magnier for $300,000 at Keeneland September in 2017 and went on to be third in the G1 Melbourne Cup and G2 Lonsdale Cup.

Famous's first mating in the U.S. was to Bernardini, who is bred similarly to Lemon Drop Kid being by his close relative A.P. Indy. Goodman, then, must have been thrilled to get a filly, what with Bernardini's burgeoning reputation as a broodmare sire, and he retained that resulting progeny, Love Beach, to race after she went through the ring at Keeneland September in 2018 for $150,000. Love Beach was third behind the GI Breeders' Cup Juvenile Fillies Turf winner Sharing (Speightstown) in the Listed Selima S. as a 2-year-old.

Next came Sherbet Lemon, who was the selection of Federico Barberini for $200,000 at Keeneland September and races in the colours of Apple Tree Stud for trainer Archie Watson. Sherbet Lemon won on debut on the Newcastle all-weather in February and made up ground from the rear of the pack to be third in the Wetherby novice race on Apr. 25 that produced Juddmonte's 'TDN Rising Star' Noon Star (GB) (Galileo {Ire}). After she toughed out a soft-ground win over some similarly well-bred types on Saturday, connections indicated that a date in the G1 Cazoo Oaks on June 4 is likely in the cards.

As for Famous, she continues to get every chance to live up to her name. She has a 2-year-old colt by More Than Ready named Bad Gus, and after missing a season when barren in 2020 she foaled a Tapit filly this year.

While American buyers have become the norm on the dockets at European yearling and breeding stock sales, Goodman, originally from Texas, was perhaps one of the pioneers of that phenomenon. After a few initial visits to Tattersalls to get a feel for the market, Mt Brilliant purchased three mares at the December sale in 2011 including a full-sister to Oaks winner Casual Look (Red Ransom) named Dress Uniform for 360,000gns and the Group 3-placed Gooseberry Fool (GB) (Danehill Dancer {Ire}), a three-quarter sister to G1 Poule d'Essai des Poulains scorer Aussie Rules (Danehill), for 440,000gns. Goodman returned the following year to snap up Desert Classic (GB) (Green Desert), the dam of GI Breeders' Cup Juvenile Turf scorer Wrote (Ire) (High Chaparral {Ire}), carrying a full sibling to him for 875,000gns, and others purchased over the years in conjunction with agent Marette Farrell include the graded stakes-placed Dame Marie (Smart Strike), a half-sister to G1 St Leger winner Rule Of Law (Kingmambo) for 500,000gns; and the half-sisters Superioritycomplex (Ire) and Abingdon (Street Cry {Ire}) from the Ballymacoll dispersal in 2017. Mt Brilliant also has Debonnaire (GB) (Anabaa), the dam of Australian Group 1 winner Hartnell (GB) (Authorized {GB}), and like Famous bred a few foals out of her in Europe before bringing her across to Kentucky.

Sherbet Lemon's story, then, is one of blending the best of the breed on both sides of the Atlantic through and through. Should her good fortune last through to the winning post at Epsom, it would be a success story generations in the making.