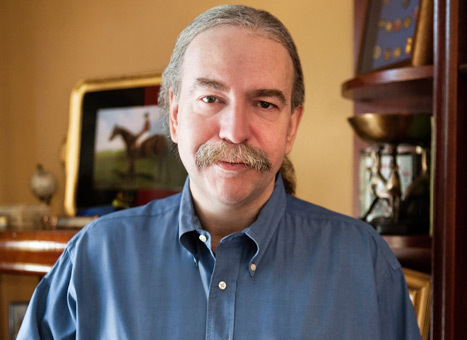 Revolutionary handicapper and racing writer Steve Crist has been out of a public eye after retiring five years ago, but still has as much passion and enthusiasm for racing as he's ever had, and Wednesday morning, he joined the TDN Writers' Room presented by Keeneland for an expansive discussion on a variety of industry issues. Calling in via Zoom as the Green Group Guest of the Week, Crist discussed his increasing involvement in the game from an ownership standpoint, racing's progress on detecting and punishing cheaters, the Bob Baffert saga of 2021 and much more.

Asked for his reaction to the FBI indictments of Jason Servis and Jorge Navarro and the potential enactment of the Horseracing Integrity and Safety Act, Crist said, “The Servis/Navarro stuff, I think every horseplayer knew that these guys were cheating. This was not exactly something you were shocked to learn; you knew what these guys were doing, with the routine form reversals and the accompanying floods of money on their horses. I'm delighted that racing finally went after actual cheaters, instead of continuing to dither about Lasix and accusing every prominent trainer who wins at 25% of cheating. These are two different things, and I hate to see racing having wasted so much time on issues like Lasix instead of going after real cheaters.”

Crist mainly spent his career as a horseplayer and writer, but now owns a handful of horses, and spoke about how that's changed his perspective on the game.

“I've got to say, it's been more fun than I expected,” he said. “It really is. There's a different kind of enjoyment and a different kind of rooting that goes on when it's your horses, I've thoroughly enjoyed that part of it. But I've also had my eyes even more opened to the fact that it's so difficult for people to stay in this game now. Unless you're a plutocrat or a super trainer, this industry had become very, very hard to make a living in. Our trainer, Phil Gleaves, retired at the end of the Saratoga meeting, in part because it's just so hard to make a go of it as a small stable these days. Hiring help, dealing with workman's comp, and all these other issues have made it really hard for smaller trainers to stay in business. That's not a healthy thing long term for the game. And I don't think we want to end up with 10 super stables and no small outfits in American racing. That's not going to be good.”

Elsewhere on the show, which is also sponsored by West Point Thoroughbreds, Legacy Bloodstock and Woodford Thoroughbreds, Joe Bianca and Bill Finley broke down the ramifications of Bob Baffert's loss in court Tuesday, reacted to the strong handle numbers thus far for 2021 and applauded Gulfstream for its suspensions of trainers for clenbuterol use. Click here to watch the podcast; click here for the audio-only version of find it on Apple Podcasts or Spotify.