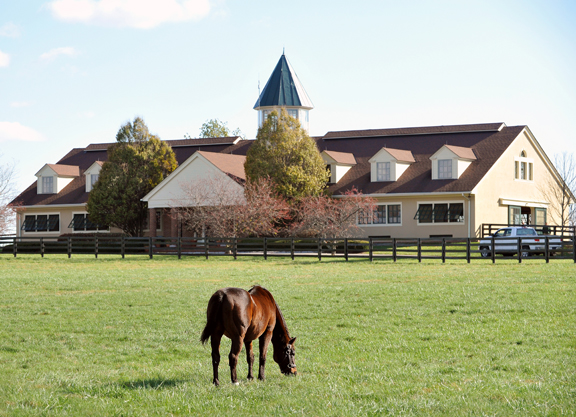 “It is with extreme sadness that we today announce the passing of our beloved A.P. Indy, he was 31 years old,” a statement from Lane’s End Farm read. “A.P. Indy passed away peacefully in his stall at the Lane’s End stallion complex, the barn he called home for 27 years. Champion A.P. Indy’s list of accomplishments range far and wide as his legacy continues to be carried through the outstanding performances of his sons and daughters across the globe. He was the most important and popular member of the Lane’s End team and we are deeply sorry to all who loved him as much as we did.”

Bred in partnership by William S. Farish and William S. Kilroy, A.P. Indy was a handsome youngster, and the emergence of his half-brother Summer Squall (Storm Bird) as the 1990 GI Preakness S. hero enhanced his pedigree by the time he was offered at Keeneland July two months later. The bay duly topped that boutique auction when selling to BBA Ireland for $2.9 million on behalf of Tomonori Tsurumaki.

Turned over to Neil Drysdale, A.P. Indy finished fourth as the favorite in his debut at Del Mar, then underwent surgery for an undescended testicle. He returned to rattle off three straight wins in 1991, capped by the GI Hollywood Futurity, and picked up where he left off in 1992 with wins in the GII San Rafael S. and GI Santa Anita Derby. That winning streak would have ensured him favoritism for the GI Kentucky Derby, but a quarter crack kept him in his stall during the Run for the Roses.

Drysdale regrouped and sent the colt to New York, where he captured the GII Peter Pan S. and GI Belmont S. A.P. Indy made his next appearance in Woodbine’s Molson Million in September, but ran fifth at 3-5. After a terrible start in the

In Demand at Stud

A.P. Indy headed to Lane’s End breeding shed as a mouth-watering stallion prospect, and delivered the goods. His first yearlings averaged $298,750 in 1995 (topped by the $700,000 Cromwell) and, from 45 named foals, he was represented by four black-type winners in 1996, headed by GSW Accelerator. Pulpit emerged as the favorite for the 1997 Kentucky Derby following wins in the GII Fountain of Youth S. and GII Toyota Blue Grass S., but sustained a knee chip when fourth on the first Saturday in May. A.P. Indy had a trio of fillies–Royal Indy, Runup the Colors and Tomisue’s Delight–win at the top level later in 1997, and those results kept breeders clamoring for his services.

The ill-fated Tempera became his first Eclipse Award winner when she secured the 2001 GI Breeders’ Cup Juvenile Fillies, and another 1999 crop member, Mineshaft, followed with a Horse of the Year campaign in 2003. Bernardini gave the stallion his first U.S. Classic win with his success in the 2006 GI Preakness S., and went on to earn honors as the year’s champion 3-year-old with additional wins in the GI Travers S. and GI Jockey Club Gold Cup. Rags to Riches came along in 2007 with an epic win over eventual Horse of the Year Curlin (Smart Strike) in the GI Belmont S., and claimed the Eclipse Award as the nation’s top 3-year-old filly.

‘TDN Rising Star’ Honor Code, owned by Lane’s End in partnership with breeder Dell Ridge Farm, emerged from A.P. Indy’s final crop with a strong juvenile showing in 2013, finishing a close second in the GI Champagne S. before taking the GII Remsen S. and entering his 3-year-old campaign as an early favorite for the GI Kentucky Derby. Although he had an abbreviated sophomore season due to injury, the dark bay tallied graded wins in the GII Gulfstream Park H., GI Metropolitan H. and GI Whitney as a 4-year-old. Honor Code ended his career with a third behind American Pharoah in the GI Breeders’ Cup Classic and retired to Lane’s End to stand alongside his pensioned sire. He was the champion older horse of 2015.

Demand for members of A.P. Indy’s final crop–which contained 35 foals–was high, as expected. Twelve of his final yearlings went through the sales ring in 2012, and nine sold–all at Keeneland September, for a sale-leading average of $466,111. A 2-year-old filly from that crop sold the following year at Fasig-Tipton Florida for $1.1 million–the second-highest price paid at the sale and tops for a filly.

Daughters Also Contribute To His Legacy

As brilliant a sire as A.P. Indy has been, his achievements as a broodmare sire are equally impressive, as his numbers nearly match those of his Triple Crown-winning sire. To date, A.P. Indy’s daughters have produced a total of 215 black-type winners (101 at the graded/group level)–he is the broodmare sire of winners of the GI Kentucky Derby (Super Saver {Maria’s Mon}) and GI Preakness S. (Cloud Computing {Maclean’s Music)), a pair of Breeders’ Cup champions (Royal Delta {Empire Maker}, Game Winner {Candy Ride}), a GI Kentucky Oaks victress (Plum Pretty {Medaglia d’Oro) and a G1 Prix de Diane (French Oaks) scorer (Senga {Blame}) among his 26 Grade I winners.

By way of comparison, Seattle Slew is the broodmare sire of 225 black-type winners, 106 at the graded or group level, and 27 Grade I/Group 1 winners to date.

The hallmark of a truly great sire or broodmare sire is the ability to produce year in and year out and A.P. Indy consistently measured up. He has been among the top 10 broodmare sires each year from 2010 through the current racing season and was the second-leading broodmare sire of 2013 and 2014, before going one better in in 2015, when his producing daughters accounted for nearly $17 million in earnings. He currently sits in third spot among the leading broodmare sires of 2020, owing to the exploits of GI Pegasus World Cup Turf winner Zulu Alpha (Street Cry {Ire}).

This story was posted in Top News and tagged A.P. Indy, Horse of the Year, Lane's End Farm, leading sire.