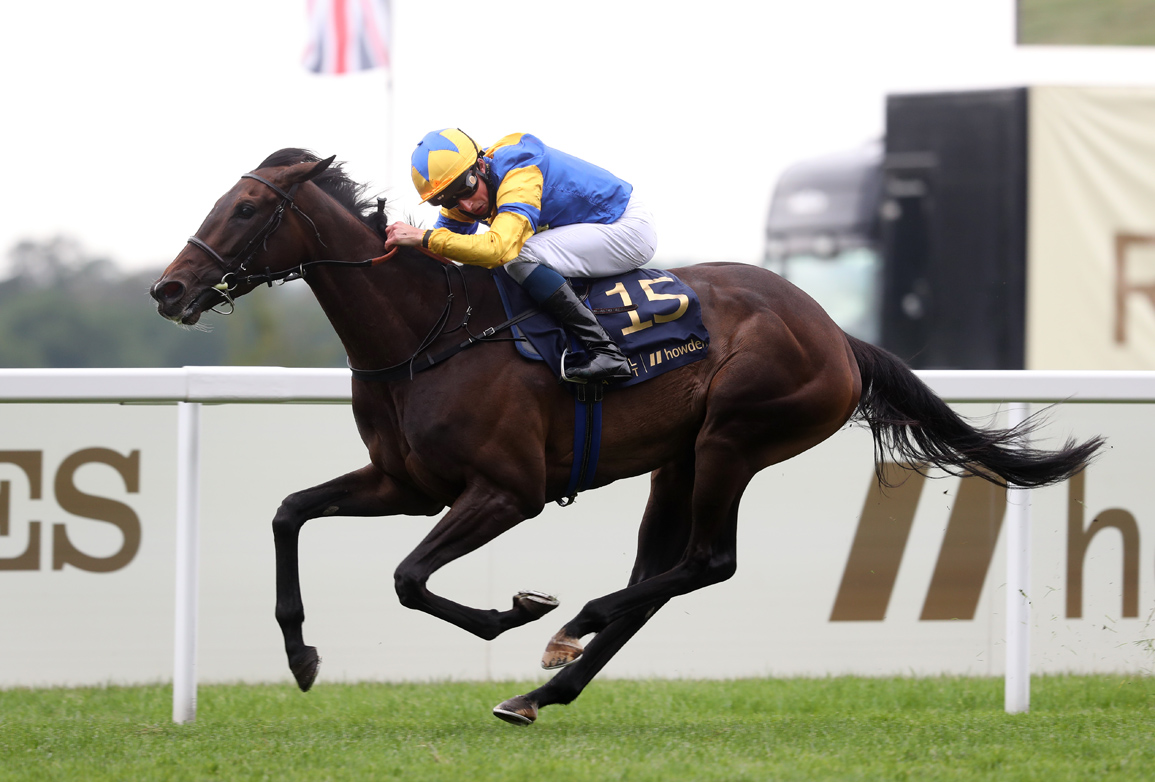 There was one certainty in Saturday's G2 Hardwicke S. and that was that Wonderful Tonight (Fr) (Le Havre {Ire}) would love the underfoot conditions and despite trainer David Menuisier's misgivings about her readiness, Christopher Wright's G1 Prix de Royallieu and G1 QIPCO British Champions Fillies & Mares S. heroine was able to register an impressive win on her comeback. Keen initially for William Buick before being granted a lead, the 5-1 shot moved three-wide on the home bend and had plenty in reserve to seize the advantage two out en route to a 1 1/2-length defeat of the 9-4 favourite Broome (Ire) (Australia {GB}) as Hukum (Ire) (Sea the Stars {Ire}) finished the same margin back in third. “When I rode her on Champions Day, I rode her like a real stayer and made plenty of use of her but today she really took me by surprise when she quickened up,” Buick said. “She's top-class and handles this ground well, unlike others, and showed a turn of foot today which she hadn't before. It was her first start of the year, so I thought I'd take a lead and she dropped her head after a couple of furlongs. She's very versatile tactically, as long as she doesn't get chased along too early, and she has a big year ahead.”

Wonderful Tonight, who unusually broke her maiden at Saint-Cloud in a 10-furlong maiden at two, was fourth in Newbury's Listed Abingdon Fillies' S. over that trip on her 3-year-old bow last June before running second to the high-class Valia (Fr) (Sea the Stars {Ire}) in the Listed Prix de Thiberville over this distance at ParisLongchamp July 23. Turning the tables on that rival when making all in the G3 Prix Minerve at Deauville in August, she was fifth in the G1 Prix Vermeille also over 12 furlongs on livelier ground back at ParisLongchamp in September prior to her victories in the 14-furlong Royallieu there and British Champions Fillies & Mares S. over this track and trip.

Free initially before Buick found cover behind Thunderous (Ire) (Night of Thunder {Ire}) as fellow Mark Johnston trainee Sir Ron Priestley (GB) (Australia {GB}) took up pace-setting duties, Wonderful Tonight had everything covered behind with Broome tracking her but unable to begin to match her change of pace after straightening up. Just as Fanny Logan (Ire) (Sea the Stars {Ire}) had in this 12 months ago, she was quickly gone beyond recall with the colts beaten up in her wake. David Menuisier was leaving no one in any doubt as to the importance of the moment in his training career afterwards. “She keeps on amazing me–she is so game and tries hard, as she's only 85% fit today,” he said. “She runs her heart out and I'm so proud of her–no words can describe what it means. You carry it like a monkey on your back until it happens and I'm pleased that Her Majesty managed to come to see Wonderful Tonight! She will go where the ground is softest, whether that's in the [July 4 G1] Grand Prix de Saint-Cloud, or the [G1] King George [VI and Queen Elizabeth S. at Ascot July 24] or the [Aug. 19 G1] Yorkshire Oaks–anywhere over a mile four where there is a good downpour. The [Oct. 3] Arc is the target. Would we try her on good ground before that? I don't know.”

The success was also a first for Christopher Wright, who said, “I couldn't believe it. What a filly. She is amazing. I have been running horses here for 40 years, almost every year at least one, sometimes several. I've never ever had a winner at Royal Ascot–lots of seconds, lots of very good horses. Culture Vulture, who won a Classic, was second twice, but I've never had a winner here. I almost can't believe it–I thought I never ever would have a winner here, but I have. It means everything, actually. There are winners and winners, but a Royal Ascot winner. I've won a lot of very good races, but to win at Royal Ascot is like I've died and gone to heaven.”

“After last year, when we almost ran Wonderful Tonight in the Arc, we thought that we would target the Arc this year. I know that's like shooting for the moon and it's a pretty tough target to aspire to, but that has been the target and her programme has been based round it, so we didn't want her to start the season too early,” Wright added. “We don't think she's a filly who will like a mid-season break particularly, so we wanted to start the season and gradually bring her along so she could peak on the first weekend of October. This was step one of that plan.”

Wonderful Tonight, who was a €40,000 private purchase at the 2018 Arqana August Sale, is a daughter of Salvation (GB) (Montjeu {Ire}) whose first progeny was the stakes winner Penjade (Fr) (Air Chief Marshal {Ire}). They are out of the Listed Lingfield Oaks Trial scorer Birdie (GB) (Alhaarth {Ire}), who produced the GIII Providencia S. scorer Hostess (GB) (Iffraaj {GB}). Birdie is kin to the listed-winning Fickle (GB) (Danehill), whose G3 Dahlia S.-winning daughter Tarfah (Kingmambo) was responsible for the G1 2000 Guineas, Epsom and Irish Derby hero and leading sire Camelot (GB) by Salvation's sire Montjeu. Also connected to the G1 Epsom Oaks heroine Polygamy (GB), Salvation's 2-year-old colt by Recorder (GB) was bought by Haras de Montfort and Preaux for €70,000 at the Arqana Deauville October Yearling Sale. Her yearling filly is by the same sire.