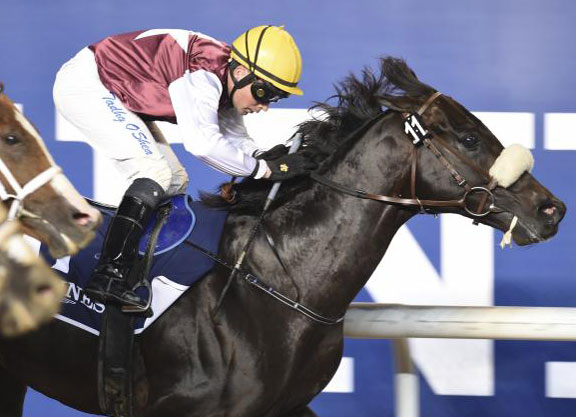 Making just the 16th start of his career, Le Bernardin (Bernardini) was gasping for air and looking for the wire late, but had just enough in the tank to land the DWCC opening-night feature for the in-form Ali Rashid al Raihe.

Campaigned in Darley maroon-and-white and trained by Kiaran McLaughlin through a six-race United States campaign in 2012, the $325,000 Fasig-Tipton Saratoga graduate posted three victories, the marquee effort among being a neck success in the GIII Pegasus S. He had raced sparingly, but not unsuccessfully since his arrival in the desert in 2013, winning a 10-furlong handicap at the Carnival last Jan. 15 by nearly five lengths before finishing a well-beaten sixth in the final round of the Al Maktoum Challenge over 2000 meters last March. He was exiting a 5 1/2-length success in the Listed Dubai Creek Mile over this course and distance when first-up for nine months Dec. 17.

Drawn gate 11 in this modified one-turn event, Le Bernardin broke well and prompted the early pace outside of Pearl Nation (Speightstown) and was asked to go on with it passing the three-furlong marker. He began to get away from his rivals in upper stretch, but the slow-starting Layl (Street Cry {Ire}) came out and around the rail-skimming Faulkner (GB) (Pivotal {GB}) and was able to claw back most of the final-deficit, but Le Bernardin was saved by the wire. Prayer For Relief (Jump Start), posted wide throughout, stayed on well down the center of the track and just lost second while covering eight meters (about three lengths) more than the winner, according to Trakus information, easily the widest trip of the race.

“It was getting a bit close late on, because my horse was tiring, but fair play to him because he kept on gamely,” said winning jockey Tadhg O'Shea, winning his second Group 2. “From a bad draw I probably had to use up more petrol than ideal early on so he has had to dig very deep in the final stages. I think we will just keep him fresh and wait for Super Saturday [Mar. 5] and then, hopefully, the [G2] Godolphin Mile [Mar. 26].”