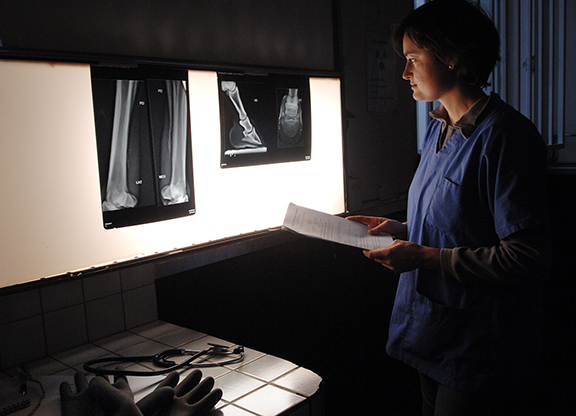 A class action lawsuit was filed Thursday in Fayette Circuit Court alleging that Hagyard Davidson McGee Associates has been falsifying the dates that radiographs were taken on some horses about to be sold at Keeneland since 2006.

The story was first reported by the Lexington Herald-Leader.

The defendants include Hagyard and four of its veterinarians, Drs. Michael T. Hore, Robert J. Hunt, Dwayne Rodgerson and Michael Spirito. An accounting firm, Dean Dorton Allen Ford, which works with Hagyard in the areas of computer and information technology services, is also named as a defendant.

The primary plaintiff in the lawsuit is Midwestern based trainer Tom Swearingen, who has purchased 24 horses at Keeneland sales since 2007. Keeneland is not named in the lawsuit and an official from the track and sales company told the TDN they would have no comment.

Most major sales companies have developed a repository over the year as a convenience to potential buyers, so that they did not have to take X-rays or radiographs on horses themselves. It became the responsibility of the consignors to take radiographs of their horses and then place them in the repository, where they were available to any potential buyers, their representatives and their veterinarians.

Because a radiograph taken within close proximity of a sale is more useful than one that may have been taken months ago, Keeneland instituted rules requiring that a radiograph for a yearling must have been taken no more than 15 days prior to the time they are sold and the time limit for all other horses was 21 days.

“The reason such deadlines exist are self-evident: the recency of the images is important,” the suit states. “The more current the radiographs are, the more useful and reliable the information will be to the buyers, which in turn enhances buyer confidence.”

The suit goes on to claim that “had the truth been disclosed (about outdated radiographs), bidding on horses at the Keeneland sale was, in essence, the functional equivalent of playing Russian Roulette: the Plaintiff would be bidding on horses not knowing they were subject to fraudulent X-rays, and not know if those X-rays affected one horse or 100 horses.”

Hagyard has been one of the major suppliers to the repository since its inception. Attorney Mason Miller, who is representing Swearingen, said he believes that Hagyard took short cuts that led to its failure to comply with Keeneland’s rule. He said that when someone from Hagyard visited a farm they took the radiographs on the same day of all the horses that the particular farm was selling. If one of those horses were selling on the first day of the sale, the radiograph likely would have been taken within the time frame established by Keeneland. That may not have been the case if the horse was sold on the 10th day of the sale.

“They were trying to do about half of all the radiographs done for each sale,” Miller said. “What they needed to do to be in compliance with the rules was to, say, take five on one day at a farm and then head down the road to the next farm and then come back three or four days later to the original farm to get more radiographs. They’ve been saying they could never do that, that there would be too much pressure to get the job done. If that’s the case, perhaps they shouldn’t have been so eager to keep so much of the business of doing radiographs to themselves.”

The suit claims that if Hagyard had a radiograph it knew did not comply with Keeneland’s rules it would simply falsify the date as to when the radiograph was taken.

Miller said there is no telling how many radiographs had their dates altered because Hagyard has destroyed the originals.

“Indeed, based on information and belief, the fraud has involved tens of thousands of radiographs, although the exact number will never be known because the Defendants intentionally destroyed the evidence,” the suit states.

The case came to light when some of the Hagyard veterinarians reported themselves to the Kentucky Board of Veterinary Examiners in mid-2018. According to the suit, Dr. Hore admitted under oath that 5% of the total radiographs he took were intentionally altered and that Dr. Spirito testified that 10% of the X-rays he took for sales purposes were intentionally altered.

Calls made to Hagyard Davidson McGee Associates Friday seeking comment were not returned.