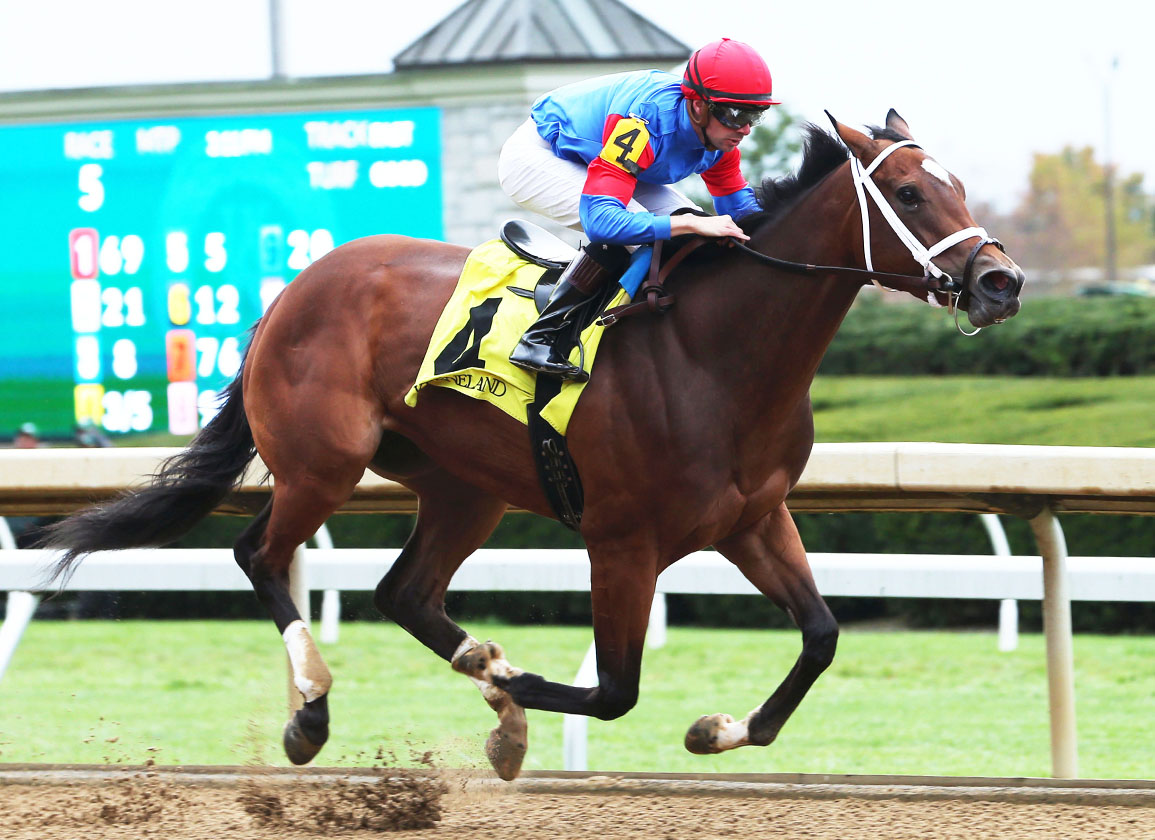 Clarkland Farm homebred MARR TIME (Not This Time), the penultimate foal out of outstanding blue hen Leslie's Lady (Tricky Creek), made her debut a winning one at Keeneland and earned the 'TDN Rising Star' tag in the process. Showing good early speed, the 3-5 chalk sparred with 20-1 longshot Roll Baby (Runhappy) through a :22.84 opening quarter. Shaking off that foe on the backstretch, the bay jumped clear in the lane to win going away by 2 3/4 lengths. Dame Joviale (Into Mischief) was the runner-up. Marr Time is the second 'TDN Rising Star' for her young sire Not This Time, joining GISW Princess Noor.

Fred & Nancy Mitchell's Clarkland Farm purchased the golden goose that is Leslie's Lady for just $100,000 in foal to Orientate at the 2006 Keeneland November Sale and it would prove to be the bargain of a lifetime. Her 2005 foal Into Mischief (Harlan's Holiday) won the GI Cashcall Futurity S. for Spendthrift 13 months after that purchase. He went on to become one of the most prolific stallions of his generation and seems to just get better each year. Her fourth foal for the Clarkland team was none other than future Hall of Famer Beholder (Henny Hughes), a $180,000 KEESEP purchase by Spendthrift. The bay mare won four Eclipse awards, three Breeders' Cup races and seven other Grade I events, earning over $6.1 million before retiring to the breeding shed.

Leslie's Lady's 2013 foal, a Curlin filly named Leslie's Harmony, summoned $1.1 million from Bridlewood Farm at Keeneland September, but she did not reproduce her sibling's racetrack prowess. However, Leslie's Lady's 2015 foal outdid that filly in the sales ring and on the track. Mendelssohn (Scat Daddy) topped the 2016 KEESEP sale on a final bid of $3 million from Coolmore and captured the GI Breeders' Cup Juvenile Turf and G2 UAE Derby. The GI Travers S. runner-up currently stands at Ashford Stud and his oldest foals are yearlings, who have been well received in the sales ring. Leslie's Lady's last foal to be offered at auction, an American Pharoah filly named America's Joy, set a new record when summoning a whopping $8.2 million from Mandy Pope's Whisper Hill Farm at Keeneland September. Sadly, the 3-year-old filly was euthanized over the summer after suffering a career-ending injury in a workout. The 25-year-old mare's final foal is the now-yearling filly Love You Irene (Kantharos), who, like Marr Time, was retained by her breeder.