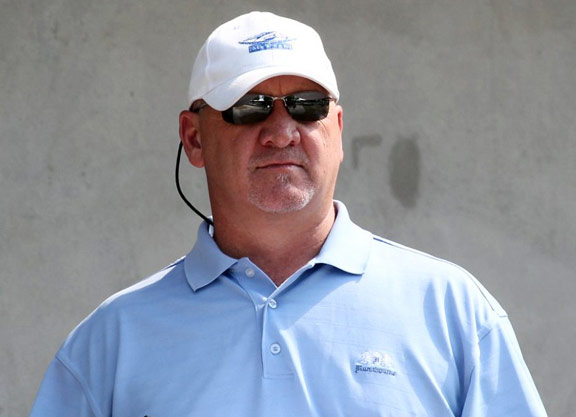 Five horses so far have won while running without the diuretic, which may not seem like a lot, but only a small minority of trainers at the meet have decided to run without the drug.

No trainer has taken better advantage of the program than Ken McPeek, who has had three Lasix-free winners. His latest came last Thursday when Eskimo Kisses (To Honor and Serve) won a $79,000 allowance race by 11 1/2 lengths. Owners Sherri McPeek, Gainesway Stable and Harold Lerner picked up a $4,740 bonus.

“I think Lasix is overrated,” McPeek said. “I think you see too many horses that are dehydrated from overuse of it, or they don't handle it well. I've had a nice run with horses racing without Lasix. Daddy's Lil Darling (Scat Daddy) won a Grade I [GI American Oaks] at the end of the year without Lasix and nobody said a word about it. I've run in Europe without Lasix and the horses ran fine. It's unfortunate that there are not a lot of horsemen of the opinion that they can race without it. I think they're a little bit blinded.”

McPeek's biggest non-Lasix success story of the meet has been Blueridge Traveler (To Honor and Serve). He took him off Lasix for a Feb. 10 $80,500 allowance at Oaklawn and picked up a win. He brought him back 14 days later in $100,000 Maxxam Gold Cup at Sam Houston, and although no bonuses were involved, he raced the horse again without Lasix. Picking up his first stakes win, Blueridge Traveler won by a neck.

“He ran well without it at Oaklawan and was able to add a little extra purse money into the pocket of the owner,” McPeek said. “For the Sam Houston race, I didn't want to change anything. If something works, you just keep going with it. Blueridge Traveler came back in two weeks and he couldn't have done that if he ran on Lasix because the Lasix would have taken a significant amount of water weight off of him and I would have had to replenish it before I would have felt comfortable running him again.”

Will Van Meter is another trainer that has embraced the Lasix-free program. So far, he's picked up one winner without it, Plainsman (Flatter), a winner of a $79,500 maiden race in January.

“Philosophically, we don't run without Lasix just trying to earn the bonus,” he said. “The bonus is fantastic. I applaud it. I support it. I think it is a great idea. But it's not the driving factor as to why we run without Lasix. It's a nice cherry on top. My biggest owner is John Ed Anthony and we both feel that if a horse doesn't need Lasix, why run them on it? I don't think we're at any competitive disadvantage at all.”

McPeek and Van Meter both run plenty of horses on Lasix. They say they use it with horses they believe will benefit from it and stay away when they see no reason to think that it will be helpful.

“It's an artistic freedom of mine,” McPeek said. “I look at each one and if I think they'll run better with it, I will use it. If a filly tends to lean toward getting a little dehydrated like Daddy's Lil Darling does, then I think I'm better off without it. I think they bounce back quicker.”

“He's a consistent horse and he doesn't run any better or worse with or without Lasix,” McPeek said. “But what I found with him is that he bounces back much quicker after his races than most horses.”

Through last Sunday, total bonus money awarded under the program was $50,670, funds that are covered by Oaklawn and do not come from its purse account. McPeek says it's important that all tracks add such a bonus, but he seems to be in the minority. The GI Pegasus World Cup allowed a seven-pound weight allowance to any horse than ran without Lasix and none of the 12 entrants decided to go without the medication. And at Oaklawn, the March 1 , 2 and 3 cards consist of only three horses running without Lasix, one of them trained by McPeek.