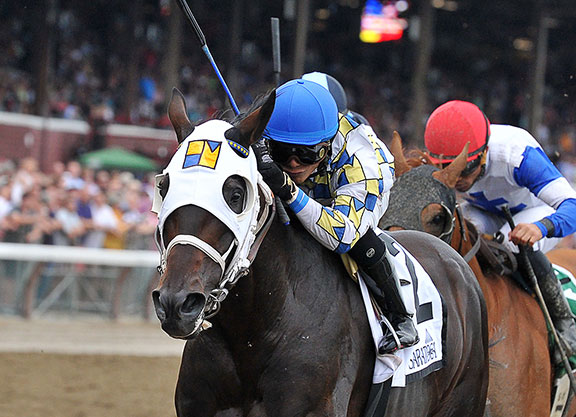 A colt by Laoban work the co-fastest furlong of the week Sunday during the sixth and final session of the Ocala Breeders' Sales Company's July 2-Year-Olds and Horses of Racing Age Sale under-tack show. The session, originally scheduled for Saturday, was delayed a day after lightning damaged the track's timing equipment.

From the first crop of GII Jim Dandy S. winner Laoban (Uncle Mo), hip 983 was the second juvenile to work the furlong in :9 4/5 during the under-tack show. Out of One Look (Henny Hughes), the bay is consigned by Jesse Hoppel's Coastal Equine.

“This track has played really weird all week,” Hoppel said. “But the way he prepped, we thought he'd be a :10 flat type horse. If you think they are in one spot, you get lucky and they go a little bit faster and, if you have some bad luck, sometimes they go a little bit slower. But he was really spot on today. He did really good.”

“I think it will highlight him for sure,” Hoppel said of the bullet. “But if the horse made a good video-which I think he did, he's got a really good way of moving–then he will be just fine. I don't think you have to necessarily be the bullet to sell a horse well. As long as the horse has good action and they go fast the right way, that's the thing, they have to go fast the right way. Sometimes you get a horse that goes really fast and they look like something is about to fly off. And that's no good. But I think he did it the right way, so they'll appreciate it.”

Hoppel is consigning the colt on behalf of a group of friends who partnered to buy the youngster for $3,000 at last year's Fasig-Tipton October Yearling Sale. Luis Franco signed the ticket in Lexington last fall.

“He is a robust, strong, aggressive colt,” Hoppel said of the juvenile. “He is a horse that doesn't not show up. Some of these colts sometimes they get a little lazy or they start thinking about other things. He's a very game individual.”

Hoppel sent out 11 juveniles to work during the week at OBS–including the bullet quarter-mile worker on the first day of the under-tack show–and the consignor said the track shifted from session to session as conditions went from hotter to cooler temperatures and was hit by several major rainstorms.

“I think the biggest part of the track is that it's heat sensitive,” Hoppel said. “And dealing with July in the state of Florida, heat is an issue. That track gets to be a softer, slower playing track the more heat that is on it. When it is cold, the track is hard and fast. So this week, we had rain, we had heat, it just depends on was it a cold rain that cooled the track off or not. We had some days that were faster than other days. I had enough horses here that I had a good sampling throughout the week and I know where these horses are amongst themselves. So I know some days were different than other days. And those good agents, they know this track plays different day to day, so they will measure these horses on a per-day basis.”

A filly by Bahamian Squall (hip 1030) turned in Sunday's fastest quarter-mile work when covering the distance in :20 3/5. Consigned by McKathan Brothers Sales, the dark bay filly was supplemented to the July Sale. She is out of Up for Grabs (First Samurai) and was purchased by Fernando Velasquez for $1,000 at last year's OBS October Yearling Sale.

A colt from the first crop of multiple graded stakes winner Protonico (Giant's Causeway) equaled the fastest three-furlong work of the week when covering the distance in :33 flat Sunday for Whitman Sales. Out of Mongolian Changa (Brilliant Speed), the dark bay was purchased by Christy Whitman for $1,000 at the OBS Winter Sale.

The July sale will be held Tuesday through Thursday with sessions beginning daily at 10 a.m.