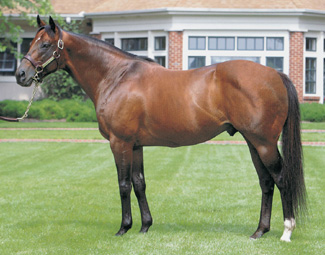 Kingmambo (Mr. Prospector), the first produce of the irrepressible two-time GI Breeders' Cup Mile heroine Miesque (Nureyev), the sire of champions in nine different countries/continents and of 85 black-type winners to date, was euthanized Tuesday at William S. Farish's Lane's End Farm in Versailles, Kentucky, due to the infirmities of old age. The announcement comes five years to the day of his dam's death at Lane's End. Kingmambo, who will be buried at the farm, had just turned 26 years of age, having been pensioned from stud duties in 2010.

“It is a tough, emotional loss for all of us here at the farm,” Will Farish commented. “He's been with us for a long time, was so very successful and will be greatly missed. We're very grateful to Stavros [Niarchos], Maria [Niarchos-Gouaze] and the whole Niarchos Family for entrusting his care to us.”

Bred and raced by Stavros Niarchos and trained by Francois Boutin, Kingmambo was a top 3-year-old of his generation in 1993, winning the G1 Poule d'Essai des Poulains and the G1 St James's Palace S. before besting older rivals in the G1 Prix du Moulin. He retired with five wins from 13 starts and earnings of $733,139.

“It is every owner/breeder's dream to have a filly like Miesque,” Mrs. Niarchos-Gouaze said. “Then for her to give them two Classic winners from her first two foals in Kingmambo and East of the Moon is unique. Kingmambo was one of a kind who has stamped the breed forever and who has given us so much pleasure over the past 26 years.”

Kingmambo made a near-immediate impact once retired to stud at Lane's End, as he sired 1998 G1 Japan Cup hero and 1999 Japanese Horse of the Year El Condor Pasa from his very first crop to race. His second crop included Lemon Drop Kid, who annexed the GI Belmont S. in 1999, received an Eclipse Award as champion older horse in the U.S. in 2000 and ultimately retired to stand alongside his sire at Lane's End. Kingmambo was the sire of six champions or highweights in the U.S., Europe, England, France, Ireland, Germany, Italy, Japan and Saudi Arabia. He was the sire of fully 24 horses to win at the highest grade from an average crop size of less than 64 foals.

Kingmambo proved remarkably versatile, siring top-level juvenile winners and horses that improved with age. He had the propensity to throw Group 1 winners over sprint distances–such as Malhub, victorious in the G1 Golden Jubilee S. over six furlongs–or marathon trips, as he accounted for two runnings of the G1 Doncaster St Leger S. with Rule of Law (2004) and Encke (2012), both campaigned by Godolphin. The bay stallion also became a prolific sire of G1 Guineas winners across Europe, including Flaxman Holdings's Divine Proportions, Russian Rhythm, Henrythenavigator, Virginia Waters and King's Best. His daughter Light Shift became a Classic winner in her own right in the 2007 G1 Vodafone Oaks. 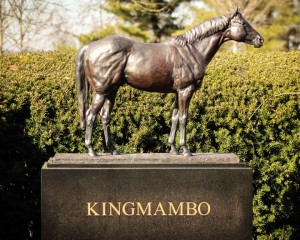 Kingmambo's success was not limited to overseas racecourses. In addition to his Classic-winning son Lemon Drop Kid, he was the sire of additional American Grade I winners Student Council, Voodoo Dancer and Boboman. His other U.S. graded winners included King Cugat, the full-brothers Parade Leader and Parade Ground, Rey de Café, Monarch's Maze and Mambo Slew. Kingmambo is currently the sire of 50 group/graded winners worldwide, with progeny earnings in excess of $104 million to date.

Kingmambo has also become a leading broodmare sire worldwide, his daughters having produced 108 black-type winners, including Midday, Duke of Marmalade, Camelot, Gozzip Girl, Maids Causeway and Ruler of the World.

A 'King' Even Further Afield…
El Condor Pasa, whose wins in the 1999 G1 Grand Prix de Saint-Cloud and G1 Prix d'Ispahan and runner-up effort in that year's G1 Prix de l'Arc de Triomphe laid the groundwork for increased overseas participation for Japanese runners, helped stimulate interest in the country for his sire's offspring. Kingmambo's top career money spinner is King Kamehameha (Jpn), whose dam Manfath (Ire) (Last Tycoon {Ire}) was offered by Barry Irwin's Team Valor at the 2000 Keeneland November sale in foal to Kingmambo. The mare was purchased by Katsumi Yoshida for $650,000. Winner of the 2004 Tokyo Yushun (Japanese Derby)–at that point an ungraded event–King Kamehameha added three additional black-type scores and was named Japanese Horse of the Year that season. He retired with seven wins from eight trips to the post with earnings of $3,904,136 and has since topped the Japanese sires' table on two occasions (2010, 2011). Other Japanese stakes winners for Kingmambo include American Boss and Star King Man, while Alkaased provided his sire with a second Japan Cup winner in 2005. The stallion's reach extends to places like Hong Kong and Australia, as well. Kingmambo's son Archipenko took out the G1 Queen Elizabeth II Cup at Sha Tin, while Tawqeet was a Group 1 winner in Melbourne and Sydney.

FROM THE DESK OF BILL OPPENHEIM: Remembering Kingmambo

Probably the biggest compliment that can be paid to Kingmambo was that he really stamped his class onto his progeny. They didn't always look like him – Kingmambo always struck me as a real Mr. Prospector to look at, yet Lemon Drop Kid looks more like his damsire, Seattle Slew. But Kingmambo did transmit his class, and he was all about class, since besides being by Mr. Prospector he was out of two-time GI Breeders' Cup Mile winner Miesque, who had tons of class, and she was by Nureyev, who was the epitome of class.

In terms of numbers, Kingmambo is listed on the TDN Cumulative General Sire List as having sired 894 named foals in 16 crops, of which 85, or 9.5%, were Black-Type Winners, including 50 group/graded SW, and 24 Group1/Grade I winners. Possibly his best sire son is King Kamehameha, the number two sire in Japan after Deep Impact; but Kingmambo's record as a broodmare sire is even more impressive. So far he is the damsire of 95 A Runners, using the APEX data, including Camelot, the half-brothers Duke of Marmalade and Ruler of the World, and Juddmonte's champion filly, Midday.

There's a little example I like to use when trying to talk about 'class', which in my opinion trumps all other attributes in describing the best horses. Class is actually hard to describe or define: we recognize it when we see it, but it's hard to pin down. The full-brothers Sadler's Wells and Fairy King, and their three-quarter brother Nureyev, didn't look like each other, nor throw like each other; yet they all had class, and threw class. That was Kingmambo: he exuded class.