Land Over Sea Gets Out from Under Songbird 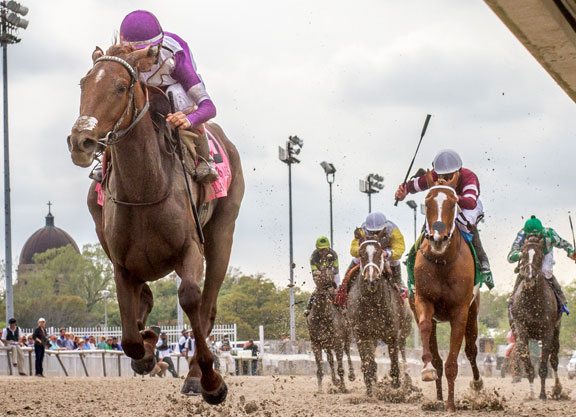 Having seen enough of the hind-quarters of a certain champion filly called Songbird (Medaglia d'Oro) in each of her five most recent trips to the post, Reddam Racing LLC's Land Over Sea ventured beyond the confines of California for the second time in her career and punched her ticket to the GI Kentucky Oaks May 6 with a tough success in the GII Fair Grounds Oaks.

A maiden victrix over the Del Mar turf course at second asking last July, the chestnut was a well-beaten third to Songbird in the GI Del Mar Debutante Sept. 5 and runner-up in the GI Chandelier S. Sept. 26 ahead of a non-threatening seventh-place effort as a 7-1 gamble in the GI Breeders' Cup Juvenile Fillies Oct. 31. The 23-1 third choice behind 1-20 Songbird in the GII Las Virgenes S. Feb. 6, Land Over Sea rallied from second-last to complete an $8.40 exacta and she was doing the most running late when 3 3/4 lengths behind the Eclipse Award winner when last seen in the GIII Santa Ysabel S. Mar. 5.

Midnight on Oconee (Midnight Lute), runner-up to Stageplay (Curlin) in the Jan. 16 Silverbulletday S. and to Venus Valentine (Congrats) in the GII Rachel Alexandra S. Feb. 20, led them into the first turn as the progressive Adore set up shop off the leader's flank. Northwest Tale (Tale of Ekati) enjoyed the run of the race from just in behind, while Land On Sea raced two from the tail as a decent pace developed up ahead of her. Midnight on Oconee still led going well enough for Florent Geroux as they hit the far turn, but John Velazquez had the chalk in high gear, though they were forced into a deep run on the bend. Adore wrested command from Midnight on Oconee and looked every part a winner approaching the furlong grounds, as Land Over Sea looked one-paced. But, roused sharply inside the final eighth of a mile, the O'Neill runner hit another gear to report home a clear-cut winner. Dream Dance, unraced since crossing the line third in the GII Golden Rod S. Nov. 28, made good ground from last and rallied strongly at the rail to just touch Adore out of second, then galloped out well.

“I was on the outside and I didn't want to come out of there rushing,” commented Velazquez. “She broke a little slow anyway, so I took advantage of that and saved some ground on the first turn. On the backstretch a horse was backing up, so I went around that one and then by the three-eighths I was sitting third and from there it was all her. When I came down the lane, she switched leads and showed the quality she is and what she was chasing out in California.”

A half-sister to War Story, who filled third spot behind International Star (Fusaichi Pegasus) in the GII Louisiana Derby on this program 12 months ago, Land Over Sea is also kin to the 2-year-old Cedar Rapids (Elusive Quality), a $175,000 Keeneland September yearling who just recorded his first breeze Saturday at San Luis Rey Downs. Belle Watling produced a filly by Curlin Jan. 27. Land Over Sea's third dam is GI Kentucky Oaks placegetter Honest and True, herself the dam of champion Epitome.