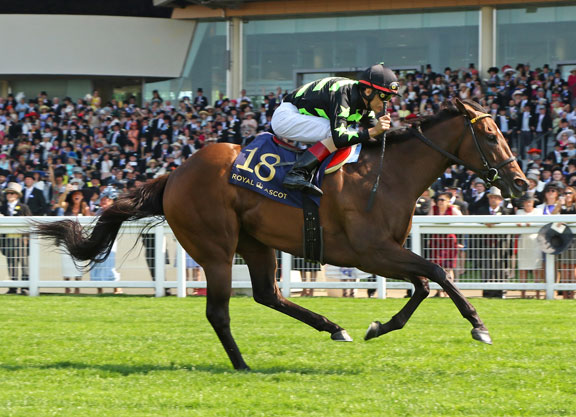 “Lady Aurelia is the embodiment of Stonestreet's breeding program,” said Stonestreet's Barbara Banke. “A brilliant filly out of a champion, she took on all comers across the globe at the pinnacle of our sport. The first American-trained Cartier winner when she was named 2-year-old filly of the year, her talent and raw speed were breathtaking.”

Like so many Ward trainees, Lady Aurelia broke her maiden in a 2-year-old dirt race in the spring meet at Keeneland in 2016. Ward promptly sent her to Royal Ascot, where she won the G2 Queen Mary S. and went from there to Deauville to win the G1 Darley Prix Morny. That was enough for her to be awarded a Cartier Award as Europe's top 2-year-old filly.

“What made her so special? She was fast, extremely fast,” Ward said. “She was equally as good on the dirt as grass.”

After winning last April's Giant's Causeway S. at Keeneland, her lone stakes win in the U.S., she went back to Royal Ascot and scored the most significant win of her career. Facing older males, the then 3-year-old filly took the prestigious G1 King's Stand S.

“Once she learned to harness and control her speed then it really got to be where she was dangerous,” Ward said. “As a 3-year-old when we taught her to rate a little bit then she got to be where she was a superstar. She could use that explosiveness and not just to go to the front, but she could sit back and use that big punch that she had. She was visually impressive at Royal Ascot at two. But when she ran at Royal Ascot as a 3-year-old, that race she ran against older horses. That just doesn't happen.”

“She was always a really relaxed filly,” Ward said. “You'd never know how great she was if you saw her around the barn. She was never a bother and an easy filly to train. When you led her over there were no antics. She was a true champion.”

“Lady Aurelia is the embodiment of equine royalty,” said Hill 'n' Dale's John Sikura. “Her performances were historic and her wins emphatic at the highest levels of racing. She is a grand physical specimen and Scat Daddy is arguably the most successful international sire we have seen in more than a decade. She is the rarest of champions and we are honored to represent her this November.”

Fasig-Tipton president Boyd Browning added, “Lady Aurelia is a truly special offering based upon her accomplishments around the world, highlighted by two wins at Royal Ascot. She has the potential to become a broodmare of historic proportions.”

Stonestreet paid $1 million for Lady Aurelia's Grade II-winning and Puerto Rican champion dam D' Wildcat Speed, and later sold Lady Aurelia for $350,00 as a yearling before buying back into her.

“The racetrack successes of the horses we breed and raise are both our reputation and legacy,” said Banke. “We are a commercial breeder and were lucky enough to stay in after her sale as a yearling and enjoy her success with our partners. We remain involved in the family through her dam and a half-sister, and I look forward to watching Lady Aurelia take her many talents to her broodmare career.”