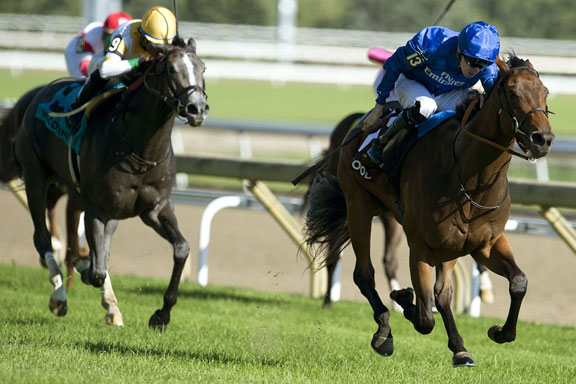 La Pelosa, placed in a pair of Group 3 events in Great Britain, shipped across the Atlantic to get the money in the GI Natalma S. Sunday at Woodbine, punching her ticket to the GI Breeders' Cup Juvenile Fillies Turf in the process.

Debuting with a three-length score over the synthetic track at Kempton May 23, the bay finished second at 12-1 next out in the G3 Albany S. June 22 at Ascot before disappointing when fifth as the favorite in the G2 Duchess of Cambridge S. July 13 at Newmarket. Third at odds-on in the British Stallion Studs EBF Star S. July 26 at Sandown Park, she got back on form with a runner-up effort in the G3 Sweet Solera S. Aug. 11 at Newmarket.

Getting a feel for the local turf with a quarter-mile breeze in :23 2/5 (1/1) Sept. 13, the Godolphin colorbearer was made a close second choice here and broke a bit awkwardly. Settling comfortably in 10th behind a :22.98 quarter, she progressed along the fence heading into the turn, angled out one path after a :45.26 half and surged into contention passing six furlongs in 1:09.08. Charging to the front at the eighth pole, she drifted out some late, but still was able to hold favored My Gal Betty off by a diminishing length. Local longshot Bold Script won a photo for third.

“She did everything right,” said winning jockey Jamie Spencer, who was riding La Pelosa for the first time. “She did what her U.K. form suggested it would do and the race worked out perfectly. I just got her into her rhythm where she's happy and let her take it from there. The pace was strong, so I was a little bit farther back than I initially planned, but that's the way it panned out and she was very brave in the straight when I asked her for a full effort.”