L and N Racing ‘Lookin’ For First Grade I 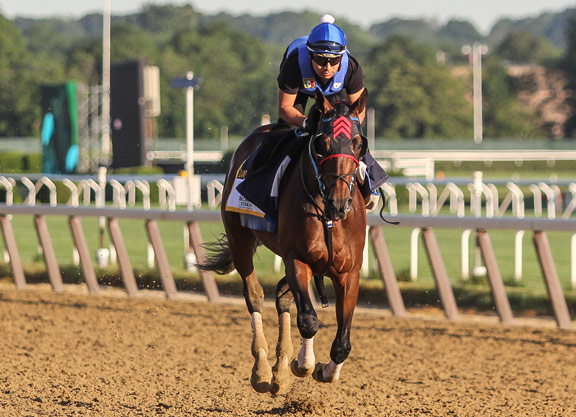 SARATOGA SPRINGS, N.Y.–L and N Racing–a partnership comprised of Lee Levinson, his sons Michael and Andy, and family friend Don Nelson–has been quite successful right out of the gate, finishing second in this year’s GI Kentucky Derby with the first horse they ever bought, Lookin at Lee (Lookin at Lucy). The fledgling operation will look to go one better Saturday and score their first graded success when Lookin at Lee lines up for the GI Travers S. at Saratoga.

“When we bought Lookin at Lee in September 2015 [at Keeneland, for $70,000], that was our first horse auction,” Michael Levinson said. “We actually picked out Lookin at Lee ourselves. Basically, we were at the sale, he walked out and we just took a blind chance on him to be honest.”

Lookin at Lee is named for Levinson’s father, a Tulsa-based attorney who also owns an oil and gas company run by his son. The elder Levinson owned horses on his own several decades ago and brought his sons and longtime friend into the game when he got back in two years ago.

“My father owned horses 20 or 30 years ago,” said Michael Levinson. “He wasn’t racing at the level he wanted to, so he got out of the business. He always told me if he ever got the money some day, he was going to do it right.”

The 35-year-old continued, “I became a fan through my dad. I went to my first racetrack at five or six years old. My dad and Don have been lifelong friends and he always told him, ‘If I ever get back in, I’m going to bring you in with me.’ So, that’s how that went.”

The Levinsons were introduced to Lookin at Lee’s trainer Steve Asmussen through another family friend and Tulsa-based attorney, Clark Brewster, who owns several racehorses. Asmussen has helped them grow their stable from one horse to 13, including the promising juvenile Orbatron (Orb).

Their first purchase Lookin at Lee still remains the stable star, however. Winner of the Ellis Park Juvenile S. last term, the sophomore completed the exacta in both the GIII Iroquois S. and GI Claiborne Breeders’ Futurity S. and closed out his juvenile campaign with a respectable fourth in the GI Breeders’ Cup Juvenile.

Third in the GIII Southwest S., the bay finished off the board in the GII Rebel S. in March and checked in third in the GI Arkansas Derby next out Apr. 15. He garnered enough points to head to Louisville for the First Saturday in May, where he splashed home to a runner-up effort behind fellow Travers contender Always Dreaming (Bodemeister) at odds of 33-1.

“It was just a really surreal experience,” Levinson said. “I was just really happy for my dad, not only to get in the Derby, but to run so well.”

Lookin at Lee was the only horse to compete in all three legs of the Triple Crown this year, finishing fourth in the GI Preakness S. May 20 and seventh in the GI Belmont S. June 10. He was last seen finishing third in the GIII West Virginia Derby Aug. 5.

Lookin at Lee will face a fully loaded field in the Midsummer Derby, including the winners of all three Triple Crown races and a few rivals he has not faced before. Lee and Michael Levinson and Don Nelson are all in town to see their first Saratoga runner.

“It’s crazy to have a horse in the Travers,” Michael Levinson said. “We have never raced a horse here, but we hear such great things about this weekend and we are pretty excited about it.”

He continued, “I can’t even describe what the feeling would be like to walk down to the winner’s circle at Saratoga for what is, in my opinion, the greatest race of the year. As far as seeing which 3-year-old is the best, I think you are going to get a clear picture from this race.”