Ky Racing Commission Shoots Down Dutrow Attempt to be Reinstated 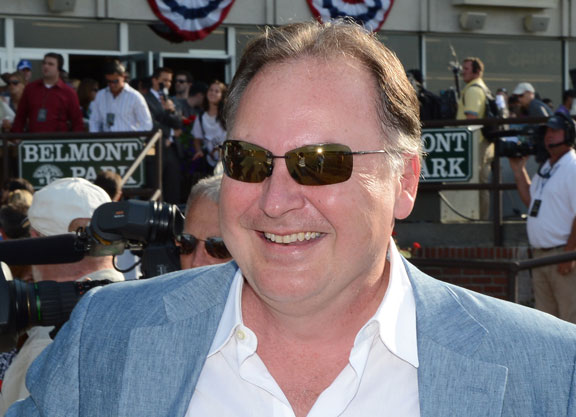 Suspended trainer Rick Dutrow's attempts to resume his career were dealt a blow Tuesday by the Kentucky Horse Racing Commission's License Review Committee. After hearing from Dutrow and others who testified on his behalf, the committee voted unanimously to allow Dutrow to withdraw his application for a license. It was within the committee's right to grant Dutrow a license, with or without conditions.
Dutrow's attorney, Karen Murphy, reluctantly agreed and withdrew the application for the license.

Dutrow was suspended for 10 years in 2011 by New York regulators for what it alleged was a long history of racing violations. He fought off the suspension in the courts for nearly two years before exhausting his appeals and began taking his penalty in 2013. Along the way, Dutrow has picked up a number of supporters, many of whom believed the penalty was far too harsh and that Dutrow was targeted because of his brash personality. There have also been allegations that syringes found in Dutrow's barn were planted. Those allegations have been made by former New York Gaming Commission steward Stephen Lewandowski, who was among those who testified Tuesday on Dutrow's behalf.

Murphy brought the case to Kentucky after her attempts to have the case revisited in New York failed. Had Dutrow been given a license, he would have been able to train in Kentucky but likely would have remained suspended in New York until 2023.

After hearing the decision, Murphy was clearly upset.

Appearing on the teleconference, Dutrow, 60, pleaded with the committee to allow him to resume training. He was emotional, talked in a shaky voice and appeared to be near tears.
“The racetrack means everything to me, my family,” he said. “It's just really been a hard time with this. Just watching from afar and saying, 'Man, I used to do this. Why am I not doing it anymore?' I have a had a hard time with that. Since I have been away I have had a chance to reflect on things and look at myself. I know that I am part of the problem. There's no question about that but I have done a lot of time for this. I just need an opportunity to train horses. That's all I want to do. That's all I've ever wanted to do. I'm sorry to take up all your time and cause all this stuff, but I just need to train horses. Please.”
Trainer Dale Romans was the first to testify for Dutrow and said New York racing officials were out to get his fellow trainer.

“I cannot sit on the sidelines and let this happen to one of my colleagues because what will ever stop it from happening to me?” Romans said. “In the racing world we are so concerned about integrity, and it is important to the game. Buy you also have to have integrity for people who work in the game. What this boils down to is a vendetta in New York. With all the evidence that is obvious.”
Veterinarian Dr. Larry Bramlage testified that he had found Dutrow to be someone who took excellent care of his horses and had an impressive record when it came to safety.

“My experience with Rick is simply how he treats these horses,” Bramlage said. “His approach to training is impeccable. He never takes short cuts with anything. He always goes with the best alternative for the horse. He never sacrifices a horse's welfare to try to win a purse before something becomes clinical. His record on lack of fatalities speaks to that and to his approach for training the horse. I'm a big fan of how he approaches training the race horse.”

By allowing Dutrow to withdraw his application it will not go on his record that he had a license application denied. That could make it slightly easier for him to win reinstatement in another state, but he and his legal team are running out of options. Kentucky is off the table for now and New York does not seem inclined to even look into Dutrow's case. Finding a racing commission that would go against those two states would likely be difficult.

In a recent story in the New York Daily News on Dutrow's fight to be reinstated, it was reported that Dutrow has lost his home and filed for bankruptcy.