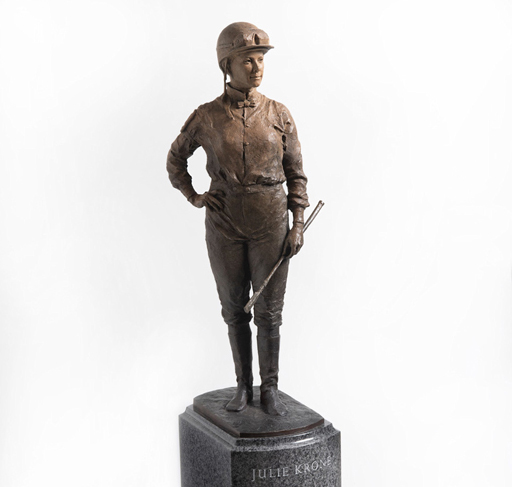 A bronze sculpture of Hall of Fame rider Julie Krone was unveiled during a private at the National Museum of Racing Hall of Fame July 18. The piece was gifted to the museum by Krone, Linda Stinson and her husband, Michael. A native of Fort Worth, Texas, Stinson began work on the sculpture in July 2016 before completing it in September 2017. It was subsequently sent to a foundry for finishing last October and was completed in July.

“On behalf of the Museum and its Collections Committee, we are thrilled to share our newest acquisition with our visitors,” said Victoria Reisman, the Museum's curator. “To have a likeness of the first woman inducted into our Hall of Fame exhibited in our Sculpture Gallery is an absolute honor for us. We want to thank Julie, Linda and Michael for this wonderful gift to our collection.”

Stinson, who earned a Masters Degree in Art from University of Dallas, served 20 years as an advertising designer before pursuing sculpture at the Scottsdale Artist School. Other racing projects by Stinson include likenesses of two-time Horse of the Year California Chrome and unbeaten New Mexico-bred Peppers Pride.

“It has been 25 years since Julie Krone rode to victory in the 1993 Belmont S., the only time in history that a Triple Crown race was won by a female jockey,” said Stinson. “This spectacular accomplishment was just one of so many record-setting achievements in her career. You could say Julie shattered the 'glass ceiling' on the back of a racehorse. In working with Julie on her portrait in bronze, I wanted to create another permanent reminder of her extraordinary life.”