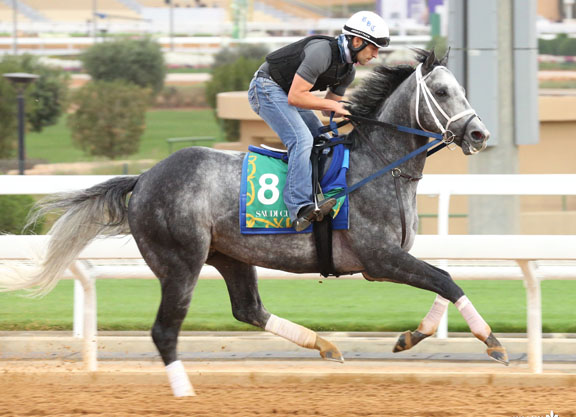 Knicks Go (Paynter) and Charlatan (Speightstown), a pair of major forces headlining the American racing scene in 2020, take on 12 others in Saturday's $20-million Saudi World Cup at King Abdulaziz Racecourse outside Riyadh, Saudi Arabia. Both Grade I winners in their latest starts, the pair represent two of America's leading trainers, Brad Cox, who took home his first Eclipse Award last season, and Bob Baffert, a 2020 finalist who had previously annexed four training titles.

Knicks Go, winner of the 2018 GI Breeders' Futurity S. while under the care of Ben Colebrook, marked his debut for Cox and Korea Racing Authority in 2020 with a victory in an 8 1/2-furlong optional claimer at Oaklawn last February. Off for the ensuing seven months, the grey romped by 10 1/4 lengths in a Keeneland optional claimer in October before posting an emphatic win in the GI Breeders' Cup Dirt Mile at the Lexington oval Nov. 7. Well supported for his 2021 bow in the Jan. 23 GI Pegasus World Cup Invitational S. at Gulfstream, the Maryland bred once again proved best, winning by 2 3/4 lengths.

“He loves to train and is so difficult to handle sometimes,” Dugas said. “But he has a lot of talent, obviously, and is sitting on a big race. He's very, very fast and is extremely tough.”

It wouldn't be a big-money event without a Baffert-conditioned runner, and the Hall of Fame trainer is represented by the lightly-raced Charlatan in the latest renewal of the nine-furlong Saudi Cup. In his latest work prior to leaving the U.S., the chestnut completed seven furlongs in 1:24.60 at Santa Anita Feb. 7.

“[Charlatan] is doing well,” Baffert told the TDN. “He has a great mind and is getting over the track well. We feel good about our chances, but they still have to get around there. I love the way he worked when he left here. I didn't do much with him there, just a light little half [mile]. He was ready to run.”

An impressive winner in his first two starts at Santa Anita last winter, the SF Racing, Starlight Racing, Madaket Racing and Stonestreet Stables runner finished first but was demoted to ninth after testing positive for a banned substance in the May 2 GI Arkansas Derby before being forced to the sidelines with a minor ankle injury. The colt returned to action with a brilliant score in the Dec. 26 GI Malibu S. at Santa Anita.

“He has to break well, but he has a nice post,” said Baffert. “Knicks Go is in there [and] Charlatan likes a target. [In the Malibu], he had [SW] Nashville [Speightstown] as his target and that worked out alright. It is a mile-and-an-eighth, but that long stretch gets demanding in the final sixteenth. There are good horses in there.”

No stranger to Riyadh, Prince A A Faisal's Mishriff (Ire) (Make Believe {GB}) was second in last season's Saudi Derby and will try to go one better in this year's Cup.

Jockey David Egan, who was in the irons in the Saudi Derby, has been aboard the 4-year-old for the last three mornings at track work.

“Similar to last year, Mishriff has been thriving since he arrived here in Riyadh,” he said. “He seems to really enjoy the style of training and the surface here in Saudi Arabia. He looks amazing, feels fresh and has been moving fluently up to the race.”

Following his Saudi sojourn, the Irish bred reeled off three consecutive victories over the summer, including Chantilly's G1 Prix du Jockey Club and the G2 Prix Guillaume d'Ornano at Deauville. He finished eighth in his latest start in Newmarket's G1 Qipco Champion S. in October.

“Mishriff looks stronger again since I saw him in Newmarket at the end of last year and he has traveled extremely well,” said Ted Voute, racing manager to Prince A A Faisal. “He has thrived over the winter. He looks well and ready for the race.”

He added, “David said he changed legs easily going into the turns and was a natural from that point of view. We're looking forward to the race.”

“He shipped to Dubai last year [for the Dubai World Cup Carnival], but had to fly back to Japan due to the cancellation of the race meetings. I think the travel experiences helped him a lot this time,” explained trainer Ryuji Okubo. “Last year, he lost 10 kg during the trip to Dubai, but this year he only lost 4 kg when he flew into Saudi Arabia. He is enjoying it here and is feeling really good. He is a very straightforward horse.”

Asked about his charge's inside post position, Okubo added, “He will start from barrier one, so we can make ground all the way through the race. I understand the American horses are very fast, but I expect Chuwa Wizard can track them and overtake them with his strong closing speed.”