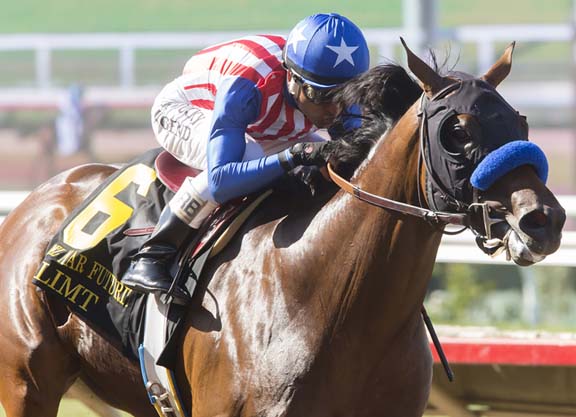 Breaking from the outside in a field of six, Klimt was within striking distance in fourth down the backstretch as favored and fellow 'TDN Rising Star' Straight Fire (Dominus) took the field through a quarter in :22.33. The favorite was pressed through a half-mile in :44.38 and looked well in control, but Klimt was gobbling up ground and drew on even terms with the pacesetter at the top of the lane. He turned back the favorite with a furlong to run and drew clear effortlessly. “Coming to the top of the stretch, I knew he was loaded and I said, 'I just hope that other horse [Straight Fire] doesn't have another gear,'” said trainer Bob Baffert, who was winning his 13th Futurity. “It was very exciting to watch.”

“When you're fortunate to have great clients who will buy these great horses, good things happen,” Baffert continued. “Kaleem has always wanted to have his silks in the paddock [on the jockey statue] and now he does.”

Rafael Bejarano always felt like he was riding the Futurity winner.

“I loved my position, all the way around there,” Bejarano said. “Just perfect. I could see the favorites up front going fast and that was good for me. At the three-eighths [pole], I felt I was home. I was loaded up and they'd gone fast early. My horse kicked in. Perfect.”

Jockey Kent Desormeaux was pleased with the effort of the runner-up, who was a dominant 10 1/2-length maiden winner in his second start Aug. 6.

“What he did up front, he did all on his own,” Desormeaux said of Straight Fire. “His ears were twitching and he was running that fast. He's the fastest 2-year-old I've ever been on. But the winner was brilliant. You've got to say that. But I'm proud of my horse. Only his third race. He's a good one.”

Chasing Aces (Flatter), who took an awkward step shortly after the break, recovered to press the favorite, but began to fall back leaving the backstretch and was ultimately pulled up by jockey Tyler Baze and vanned off. According to track officials, the colt suffered a slab fracture to his left knee and had to be euthanized.

Klimt is a son of multiple stakes placed Inventive (Dixie Union), who is also the dam of graded stakes placed West Coast Chick (Malibu Moon). She was purchased by Erik and Pavla Nygaard's Thor-Bred Stables for $130,000 while in foal to Indian Charlie at the 2012 Keeneland January sale. She resold in foal to Bernardini for $80,000 at the 2014 Keeneland November sale. Her Bernardini filly sold for $42,000 at this year's Keeneland January sale. Klimt, purchased for $140,000 by Bradley Thoroughbreds at the 2015 Fasig-Tipton Kentucky July sale, blossomed into a $435,000 OBS March juvenile.