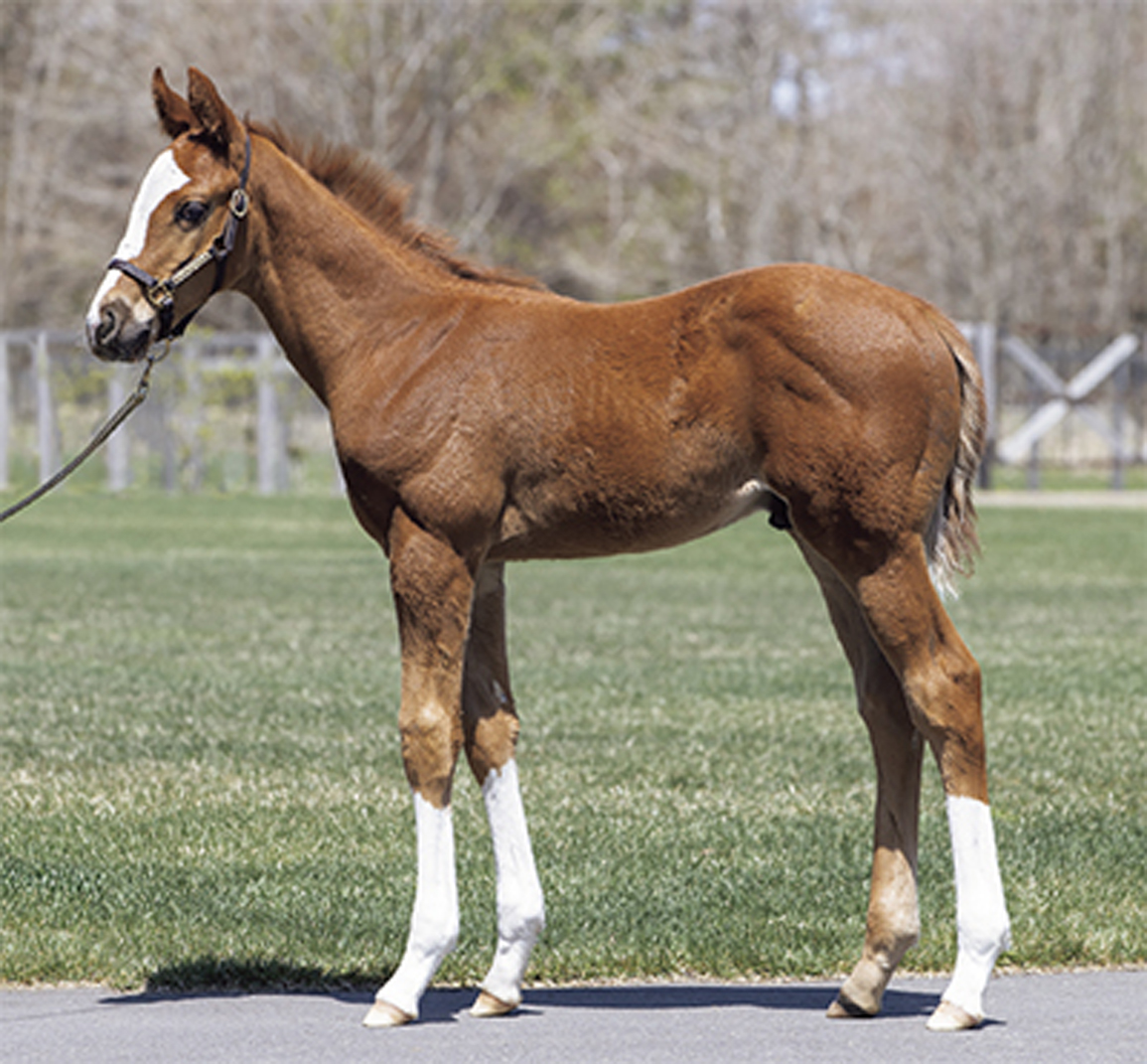 Frankel colt out of Callback | JRHA

Frankel (GB) is having a stellar season and currently holds a narrow lead over his sire Galileo (Ire) on the European sires' table, and his proficiency has extended to Japan; in fact, it was there that he posted his first Group 1 win as a sire with the subsequent Classic winner Soul Stirring (Jpn) in the 2016 G1 Hanshin Juvenile Fillies, and he now has three Group 1 winners in Japan with Mozu Ascot (Jpn) and Grenadier Guards (Jpn) also making the grade. It should have come as no surprise, then, that his lone horse in the JRHA Select Sale would be popular, and lot 329, a colt foal out of GI Las Virgenes S. winner Callback (Street Sense), certainly was that when selling to Thoroughbred Club Lion for ¥240-million ($2,173,380/€1,839,360/£1,571,566)-the fourth-highest price of the session on Tuesday.

“This is an outstanding individual,” said trainer Yoshito Yahagi, who signed the ticket. “I visited Northern Farm for inspection three times and I have a feeling this colt has been getting better, better and better. While he may not be a typical Frankel, I like him a lot and am sure he is worth paying this amount of money.”

The colt is the third foal out of Callback, who was purchased by Katsumi Yoshida for $2-million in foal to Medaglia d'Oro at Keeneland November in 2019, having previously produced a colt by that same sire who was bought by Donato Lanni for $175,000 at Fasig-Tipton's March Sale of 2-year-olds in training this year. 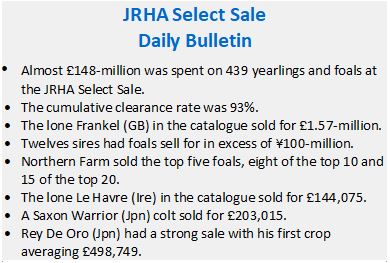 Despite prevailing COVID-19 restrictions and uncertainties in Japan, a strong desire for bloodstock among the local ownership ranks remains; the number of registered buyers at the sale was up 10% from last year, and figures climbed decisively on 2020 figures, which was itself a strong renewal of the sale despite falling in the midst of the pandemic.

The JRHA Select Sale catalogue was for the first time this year absent of progeny of leading sire King Kamehameha (Jpn) and included just four yearlings by the likewise late Deep Impact (Jpn), and thus trade could have been expected to fall short of previous renewals where they were so dominant, but the investment of Japanese breeders, in particular the Yoshida family, in quality bloodstock that has built up both the stallion and broodmare ranks shone through.

“This was a much stronger market than I expected,” admitted Teruya Yoshida, active chairman of the Japan Racing Horse Association. “As the catalogue this year did not include King Kamehameha and very few Deep Impacts, I thought the market would shrink, but I was wrong.”

“I am very impressed to see so many new players active through the two days of the 2021 Select Sale,” Yoshida continued. “Most impressive was Mr. Susumu Fujita, who attended at JRHA Select Sale for the first time and spent ¥2,367,000,000 in total through the two days, which is more than 10% of the gross sale.

“The number of buyers registered at this year's sale is more than 700, which is 10% more than  last year, and the market has a number of players at every price range. I think that is what created this strong market. And I think we have a variation of stallions standing in Japan now. There are sires who produce good sprinters, milers and stayers. There are sires of turf runners and dirt runners. The quality of broodmares we have in Japan is much higher than before, and many stallions have a chance to produce class racehorses, and have a chance to have expensive horses at the bloodstock market.

“Breeders including myself will re-invest the funds to acquire more quality mares to improve the quality of Japanese-bred horses. I hope horse racing in Japan will become a more attractive sport.”

Campaigned as a homebred by Gestut Schlenderhan, Selkis won the 2011 G2 Diana-Trial by a nose but was unable to beat another horse home in the G1 Preis der Diana won by Dancing Rain (Ire) (Danehill Dancer {Ire}). Purchased privately by Katsumi Yoshida, Selkis produced Velox (Jpn) (Just A Way {Jpn}) as her fourth foal, and he placed in all three 2019 Japanese colts' Classics. Six of Selkis's foals have been offered at this sale, with prior to Tuesday four foals averaging $329,458 and two yearlings averaging $373,520. Velox himself was a ¥48-million ($435,348/€367,651/£314,162) yearling.

“This is the one I was firmly resolved to acquire,” Ozasa said. “Yoshito Yahagi strongly recommended him, and others who inspected him told me unanimously that this is very nice horse. I thought he would cost ¥300 million or more or less, but I didn't intend to retreat at all. I won the bidding war and hope the colt will win big races.”

Kizuna is proving a rising star of the sire ranks, currently sitting fourth in the sire standings behind only his sire, Lord Kanaloa (Jpn) and Heart's Cry (Jpn). He is the sire of eight group winners from three crops of racing age.

Lord Kanaloa (Jpn) has made a meteoric rise through the sire ranks and was on Monday responsible by three of the top five prices during the yearling session. He likewise sired the second-highest-priced colt during the foal session, a son of Australian champion 2- and 3-year-old filly Yankee Rose (Aus) (All American {Aus}) (lot 398) who fetched ¥370-million ($3,356,473/€2,833,331/£2,422,832) from prominent owner Masahiro Noda's Danox Co. Ltd. Yankee Rose, who was purchased privately by Katsumi Yoshida upon conclusion of her racing career, has an as-yet unraced 2-year-old filly by Deep Impact named Romneya (Jpn) and did not produce a foal in 2020.

The recently pensioned Heart's Cry (Jpn) sired the three top-priced foals at last year's sale, and made a strong showing again on Tuesday when siring three of the top seven foals. Chief among those was lot 361, who boasted one of the best pedigrees in the book being a half-brother to international Group 1 winners Real Steel (Jpn) (Deep Impact {Jpn}) and Loves Only You (Jpn) (Deep Impact {Jpn}). He was knocked down to Miki Masahiro for ¥280-million ($2,536,025/€2,147,600/£1,834,891). The pedigree goes from strength to strength down the page, his second dam Monevassia (Mr. Prospector) being a full-sister to Kingmambo and also the dam of Group 1 winner and producer Rumplestiltskin (Ire) (Danehill). Monevassia is therefore a daughter of the great Miesque.

Alterite (Fr) (Literato {Fr}) has certainly racked up plenty of air miles in her 11 years. Having started her racing career in her native France, she was soon purchased privately by Martin Schwartz and transferred to the U.S. after winning at listed level and finishing second in the G1 Prix Saint-Alary. She promptly won the GI Garden City S. in New York and placed in two more Grade Is before returning to France, where she was sold to Katsumi Yoshida for €1.1-million at Arqana December in 2014. Alterite has two winners from three foals of racing age and on Tuesday her latest produce, a son of rising young sire Epiphaneia (Jpn) (lot 366), made ¥220-million ($1,992,591/€1,686,270/£1,440,780) to the bid of Y's Consignment Sales.

Shunsuke Yoshida, son of Northern Farm principal Katsumi Yoshida, has been a pivotal figure in that operation and this year for the first time he offered horses at the JRHA Sale under his own name. He enjoyed three ¥100-million-plus sales on Tuesday, including the joint top-priced Rey de Oro colt and an American Pharoah colt (lot 337) who fetched ¥150-million ($1,358,632/€1,148,825/£982,350) from Danox. The colt is the second foal out of Switch In Time (Ire) (Galileo {Ire}), a daughter of dual Grade I winner Switch (Quiet American). Lot 337 is bred on the same cross as American Pharoah's G2 Park Hill S. winner Pista, and similarly to last year's G1 Criterium International winner and European champion 2-year-old Van Gogh, who is out of a daughter of Sadler's Wells. This was the lone horse in the sale by American Pharoah, who has had two stakes winners in Japan: G1 February S. winner Cafe Pharoah and Listed Japan Dirt Derby scorer Danon Pharaoh.