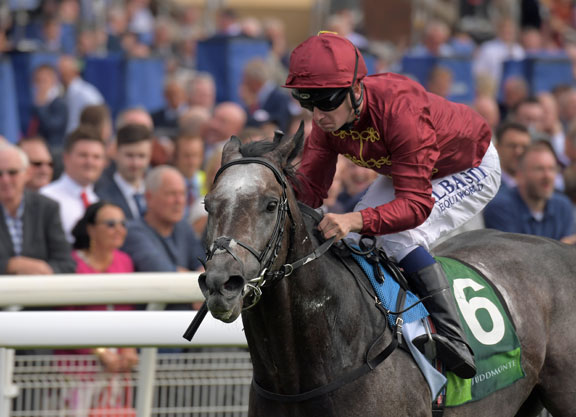 Having endured a battle royal in Sandown's G1 Eclipse, Qatar Racing's Roaring Lion (Kitten's Joy) simply sauntered through Wednesday's first real clash of the generations in York's G1 Juddmonte International to cast himself as the clear division leader. Always travelling with zest and purpose under cover with Oisin Murphy intent on employing proven hold-up tactics despite the moderate pace, the 3-1 second favourite benefitted from the field's unusual move to the stand's side after the home turn. With the 8-5 favourite Poet's Word (Ire) (Poet's Voice {GB}) momentarily compromised hemmed in on that rail, Roaring Lion had clear water ahead as he cruised forward. Striking the front approaching the furlong pole, the grey was soon in total command with James Doyle only able to follow meekly on the G1 Prince of Wales's S. and King George hero. At the line, there was a gulf of 3 1/4 lengths between two of the finest older middle-distance horses in Europe, with just a half length back to the former handicapper and G2 York S. winner Thundering Blue (Exchange Rate) in third. “It worked to plan and he's very special,” his rider said. “He wasn't the most straightforward, but they've done a lot of work with him at home and now he's an outstanding horse.”

Roaring Lion has been a work in progress all along, beating Nelson (GB) (Frankel {GB}) in the G2 Royal Lodge S. at Newmarket in September and finishing second best behind Saxon Warrior (Jpn) (Deep Impact {Jpn}) in the G1 Royal Lodge S. at Doncaster the following month, where he went past only to let the Ballydoyle rival back in. That playboy nature was in evidence again on his return in the Apr. 19 G3 Craven S. and it was ruthlessly exposed by the ultra-professional Masar (Ire) (New Approach {Ire}) as he trailed in third, but John Gosden stuck to the plan and let him take his chance in the G1 2000 Guineas. Coming forward from his prep, he shrunk the wide deficit with Masar to just 3/4 of a length as they finished third and fifth behind Saxon Warrior in the May 5 Newmarket Classic and 12 days later was concentrated enough to let fly in the G2 Dante S. over this track and trip. Tried in the June 2 G1 Epsom Derby after that emphatic win, he was at last ahead of Saxon Warrior in third and confirmed the form back in the Eclipse.

In many ways, this race was shaped by the decision of Christophe Soumillon to go steady on the returning G1 Dubai World Cup hero Thunder Snow (Ire) (Helmet {Aus}) and then take him over to the stand's rail which is generally only done when the ground rides testing. That opened things up for his following stablemate Benbatl (GB) (Dubawi {Ire}), but meant that Poet's Word went from enjoying an uninterrupted wide trip to being stuck in traffic with the fading Latrobe (Ire) (Camelot {GB}) in front and Without Parole (GB) (Frankel {GB}) to his left causing a blockade three out. While the favourite lost some momentum and ground there, it was not over three-lengths worth and he was out in time to make more of an impact had he the pace to go with the winner.

John Gosden was winning his first renewal, having suffered an unexpected reversal with Golden Horn (GB) (Cape Cross {Ire}) at the hands of Arabian Queen (Ire) (Dubawi {Ire}) in this three years ago. “This is a proper mile-and-a-quarter horse who has got bigger and stronger and he's done nothing but improve,” he said. “Gosden said: “There were no hiding places out there, but I was expecting a big performance from him as he'd been training exceptionally well. It was a horrible, wet spring and he wasn't enjoying it. The problem is he likes to play too much. We just said we'd let him enjoy himself and come to hand in his own time. He threw away a Racing Post Trophy last year and wasn't really with me at the time of the Craven and the Guineas, but by god the Guineas put him right. He won the Dante brilliantly and ran a super race in the Derby, he just plainly did not stay. He battled to win the Eclipse and he's a much better horse today than he was that day. He's come here and shown them a clean pair of heels.”

Roaring Lion looks set to be around for a while, with connections set to keep him in training at four. “He won't be going for the Arc. The [Sept. 15 G1] Irish Champion [at Leopardstown] is an obvious possibility, as is Ascot [for the G1 Champion S. Oct. 20],” Gosden added. “I would run him on good-to-soft ground, but I wouldn't want to run him on soft–that is the only proviso I have. He has a beautiful action. A good mile-and-a-quarter horse gets a mile and a half in America, but the Breeders' Cup Turf is a long way off. I'll be disappointed if he's retired at the end of the season. He's just getting good.” Sheikh Fahad also paid tribute as he left no doubt as to where this stands. “This is the best race I've ever witnessed, better than [the Melbourne Cup win of] Dunaden and that says a lot for me,” he commented. “We always knew he was a good horse, so that was special. He was babyish more than frustrating in the past and the partnership between Oisin and this horse is the best I've seen. He knows him inside out and John [Gosden] is a master trainer.”

Sir Michael Stoute was far from deflated at the stopping of Poet's Word's winning run and said, “James [Doyle] said it was very messy and he had to switch direction. We thought we were in a good position turning in and then we were in the worst position. He was very brave to then get balanced and come back and get second, so I could only be pleased with him. The winner had gone when we were reorganising. The Irish Champion Stakes wouldn't be a possibility and I don't know where we'll go, as it's too early. He's in everything he could be in.” Trainer David Menuisier was winning the award for the shrewdest move as course specialist Thundering Blue wore down Saxon Warrior late to get in the frame and reward his supplementary entry. “When we looked at the final declarations, we all had a good laugh, but the horse told us he was super well,” he said. “I'm so proud of him. The way he came home, against that calibre of opposition, I'd like to think he can win a group one. The Canadian International has always been on our minds and I'd love to be invited to the Japan Cup. Fran [Berry] rode a lot out there and thinks it would suit him really well. We also think he'll improve for a mile and a half. He is more relaxed and professional now.”

Roaring Lion was the first foal produced by Vionnet (Street Sense), whose finest hour came when third in the GI Rodeo Drive S. Sadly, she passed away at Rood and Riddle in February after developing laminitis when six-months pregnant. Only one week away from foaling, she broke her hock in the Rood & Riddle clinic and her More then Ready filly was born but could not sustain life as her lungs were too weak. She is out of the GIII Las Cienegas H. and GIII Senator Ken Maddy H. winner Cambiocorsa (Avenue of Flags), whose four stakes winners included the GII Royal Heroine Mile S. winner Schiaparelli (Ghostzapper) and the GII John C. Mabee S. winner Moulin de Mougin (Curlin). Cambiocorsa is a full-sister to California Flag, who was successful in the Breeders' Cup Turf Sprint and three times in the GIII Morvich H. Vionnet's 2-year-old colt Fran the Man (Medaglia d'Oro) was unsold at $265,000 as a Keeneland November foal, but the following year was bought by Spendthrift Farm for $550,000.