Kitten's Joy's Kameko Back On Top In the Joel 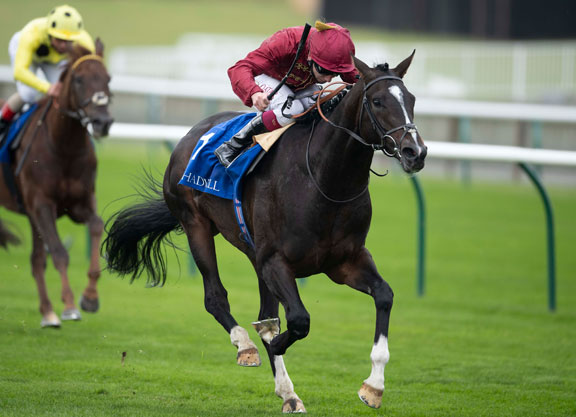 Saddled with a five-pound penalty as a result of his G1 2000 Guineas triumph, Qatar Racing's Kameko (Kitten's Joy) proved himself one of the better winners of that Classic in recent times when overcoming the extra burden to take the G2 Shadwell Joel S. over the same Newmarket mile on Friday. Settled behind the leading duo early by Oisin Murphy, the 85-40 second favourite needed rousing to get to last year's winner Benbatl (GB) (Dubawi {Ire}) but responded by usurping that rival with 1 1/2 furlongs remaining. At the line, he had half a length to spare over the strong-finishing Regal Reality (GB) (Intello {Ger}) who was having one of his better days, as the 7-4 favourite Benbatl faded late to be the same margin behind in third. “I'm delighted for Sheikh Fahad and everyone,” Murphy said. “To give weight away to older horses is a very difficult task and he stuck his head out and did everything right in the race. He ran straight as a die. He is so tough and consistent and, on ratings, I think that will rate higher than his Guineas win as to give weight away to older horses shows what a top horse he is. He is a very intelligent horse. I took him down in a hack canter and I had him really quiet at the gate. If I lit him up at all, he would have travelled really on the bridle. I was happy for him to race a little lazily today.”

Kameko was coming back from some reversals here, but he had also done that at two when following runner-up placings in Sandown's G3 Solario S. and the G2 Royal Lodge S. also over this track and trip with a dominating success in the G1 Futurity Trophy on Newcastle's Tapeta in November. Having conquered Wichita (Ire) (No Nay Never) and Pinatubo (Ire) (Shamardal) in the June 6 Classic here, he has surprisingly gone three starts without making the frame but each effort had a valid excuse attached. Out of his ground over a mile and a half when tried in the July 4 G1 Epsom Derby, he was denied a clear run in the G1 Sussex S. at Goodwood July 29 and was again stretched too far when fourth for the third consecutive time in York's G1 Juddmonte International over an extended 10 furlongs last time Aug. 19.

While he was slightly lethargic during the Guineas, he was markedly more so here as early as halfway but was still able to gain the advantage well before the final furlong and there was a feeling from there that he was only doing enough to stay in command. Regal Reality had shown when winning the Aug. 9 G3 Sovereign S. that he can be a force to be reckoned with at this trip and his proximity does not undermine Kameko's prospects of shaking up Palace Pier (GB) (Kingman {GB}) in next month's G1 Queen Elizabeth II S. That target is set in stone according to Andrew Balding. “It's a bit of a relief, as this was a tough task giving weight away to older horses,” he said. “I thought that Benbatl would have gone a slightly stronger gallop and he hit a flat spot but picked up well, so it's nice to get back on track. The QEII has been on his agenda the whole season and I just hope the ground isn't too soft by then. He hasn't had a lucky season at all and it has felt like trying to put a square peg in a round hole since the Guineas.”

Kameko will be the second member of his immediate family to tackle the QEII, with the dam Sweeter Still (Ire) (Rock of Gibraltar {Ire}) a half to the G1 Racing Post Trophy hero Kingsbarns (Ire) (Galileo {Ire}) who was third in the 2013 edition. Sweeter Still, who was successful in the GIII Senorita S. and placed in the GII Providencia S. and GII Honeymoon H., is also a half to the G3 Derrinstown Stud 1000 Guineas Trial S. winner Belle Artiste (Ire) (Namid {GB}). This is the family of the GI Breeders' Cup Turf runner-up Ace (Ire) (Danehill), who was fifth in the 2004 QEII, and his G1 Queen Elizabeth II Challenge Cup-winning full-brother Danish (Ire) and the triple group 1 runner-up Hawkeye (Ire) also by that sire. Her 2-year-old daughter of Big Blue Kitten had sold to Atlantic Bloodstock for only $5,000 at the 2019 Keeneland September Sale, but went to David Redvers for £200,000 at the Arqana 2020 Breeze Up Sale at Goffs UK. Eleven days before this race, Capital System Co. paid $190,000 for her yearling filly by Optimizer.