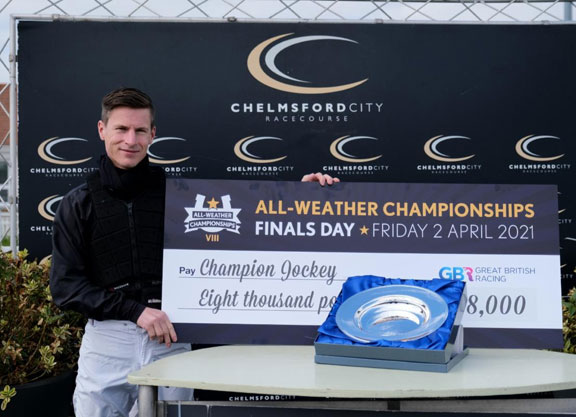 “It has been a great winter from start to finish,” Kingscote said. “I am very grateful for all the support and my agent Guy Jewel has done a good job. It has been a solid season to ride 79 winners and they have flowed nicely through the year. I am pleased with myself.

“For me, only being able to ride at one meeting has been a positive and I think a lot of the lads in the weighing room are now in favour. You can relax a bit into your day and there is no rushing because you are worried that you are going to let somebody down by not getting somewhere. It has been nice.”

Appleby, meanwhile, was earning his title for the fourth consecutive season, and fifth overall, with 59 wins.

“It is a good achievement, we've got a great team at home who work very hard all winter, so they all deserve it,” Appleby said. “We have a great bunch of owners, they back the yard and a lot of the owners have been with us a long time, so it's a great achievement.”

Ghiani, who is apprenticed to Stuart Williams, took the apprentice's title with 28 winners.

“I am really grateful; this is my third season and it has been going well,” Ghiani said. “I have never been close to being champion apprentice and this year I had a great opportunity to find some good horses and good trainers who will support me.

“My first winner was here at Lingfield two years ago and now I'm on 65 winners, so it's been a lot of winners since. Stuart Williams has helped me a lot–I am really thankful to him.

“Starting out with Luca Cumani definitely helped me a lot because when I first got here, I was at the racing school and obviously I'd just started riding racehorses. He taught me how to gallop, how to canter, the right paces, and then sent me to his son Matt Cumani in Australia for a winter. He gave me a good chance to learn faster and then has kept supporting me like an owner when he retired. He still sends me messages if I have ridden a horse and he didn't like the ride. I am definitely going to try to be champion jockey on the turf. I have some good trainers supporting me and hopefully they have some nice horses for me too.”