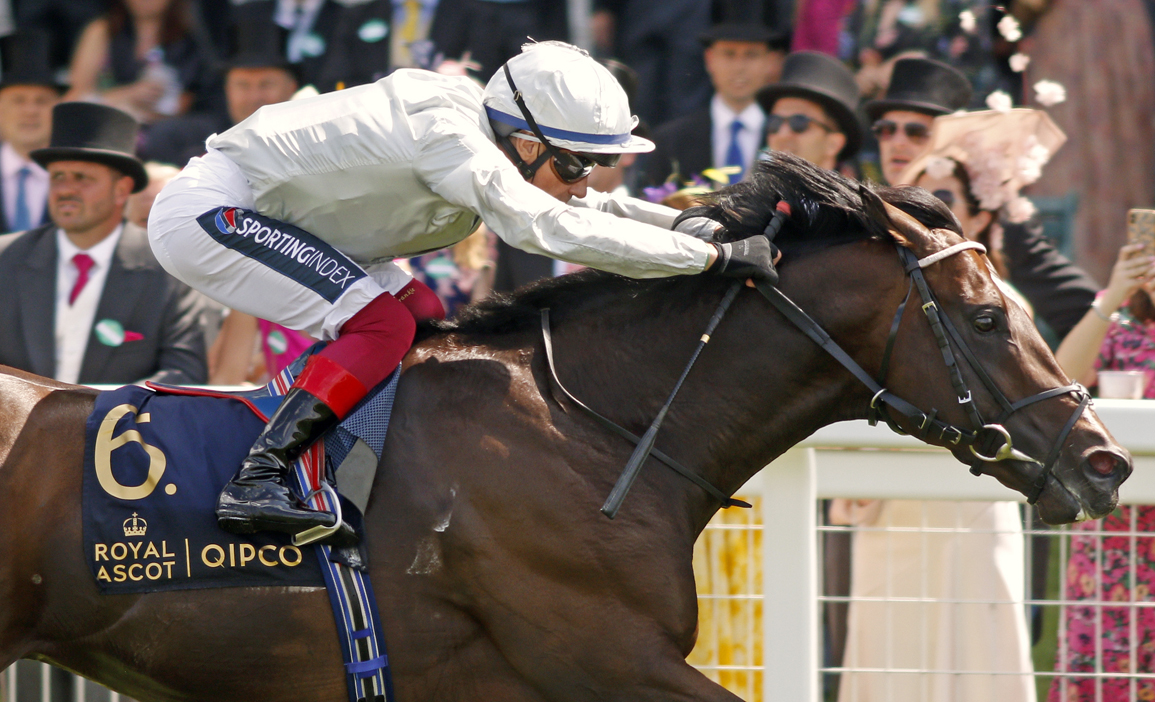 Royal Ascot 2021 will be a unique experience for an action-starved public and the lucky 12,000-strong crowd witnessed a textbook beginning on Tuesday as the world's leading Thoroughbred Palace Pier (GB) (Kingman {GB}) provided the ultimate showman Frankie Dettori with the latest in his catalogue of Royal winners in the G1 Queen Anne S., a “Win and You're In” for the GI Breeders' Cup Mile this fall. While odds of 2-7 suggested a total eclipse was imminent, Sheikh Hamdan bin Mohammed Al Maktoum's TDN Rising Star could only partially overshadow his rivals this time as he was made to work to augment his record after wins in last year's G1 St James's Palace S., G1 Prix Jacques le Marois and the G1 Lockinge S. at Newbury May 15. A touch free early exposed on the wing racing prominently towards the stand's side, the bay was niggled at approaching three out and felt the whip as he snuck ahead with the race very much still in the balance a furlong and a half later. Pulling out extra on the run to the line without the marked flamboyance of his performance a month earlier, he was able to sufficiently apply himself to put Thady Gosden on the meeting's esteemed honour roll. Ballydoyle's reinvigorated Lockinge flop Lope Y Fernandez (Ire) (Lope de Vega {Ire}) chased hard and went down only by 1 1/2 lengths under Seamie Heffernan, with a length separating him and Sir Busker (Ire) (Sir Prancealot {Ire}). “It's the first time he has run on this kind of ground and he didn't really set down as well as he can,” Dettori said after steering his 74th winner at the meeting. “He's still won a group 1 and showed again that he's the best miler around and on easier ground, he has a little bit more to give. It was a pressure ride and I wanted everything to go right and thankfully it did.”

Palace Pier's new-found zip mid-race in the Lockinge had led many to expect a scintillating display here, but this was more in keeping with his prior performances marked by a more measured change of pace. His fire had taken time to be stoked in the G2 Sandown Mile on his seasonal bow Apr. 23 and there was a moment inside the final quarter mile here where defeat was a realistic proposition. Failing to put the race to bed in the manner he had at Newbury, he nevertheless pulled out the stops to demonstrate the side of his character that is to be found in all champions. John Gosden's first instinct was that the lack of fireworks was down to a combination of the race's moderate tempo and the winner's innate idleness. “He just takes that moment to go and then he's like his father in that he gets to the front and pulls up and says he's done enough,” he commented. “We suspected a slow pace and we got that slow pace, but he did it smoothly and came through and won his race. He's a gorgeous horse with a great attitude and is one of those who is not a flashy worker but does it on the track. His sire went on very fast ground in the Sussex and on bottomless in the Jacques le Marois, so he's the same as him. He's a lovely horse with a lot of scope about him and is a pleasure to be around.”

Regarding future targets, Gosden Sr is pondering when to move up to 10 furlongs. “You could go up in trip with him, as you can see how relaxed he is,” he added. “He is in the [Aug. 18 G1] Juddmonte [International at York], but he's also in the [July 28 G1] Sussex [at Goodwood] and the [G1] Prix Jacques le Marois [at Deauville Aug. 25], so I'll talk to the owner and see. All the races are options, he'd have no trouble with the trip if they decide to go there.”