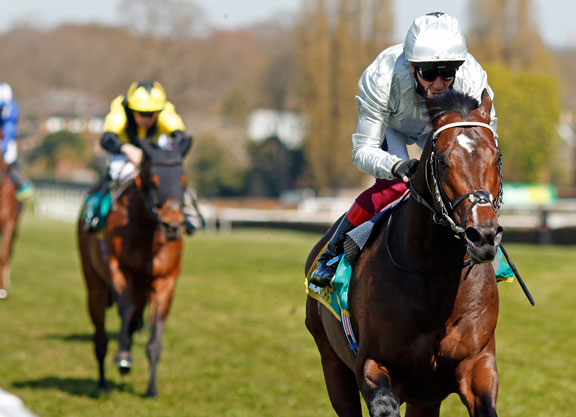 Sandown played host to the TDN Rising Star Palace Pier (GB) (Kingman {GB}) on Friday and Clarehaven's heir apparent did not disappoint on his return in the G2 bet365 Mile. Still an unknown quantity despite wins in the G1 St James's Palace S. and G1 Prix Jacques le Marois last term, Sheikh Hamdan bin Mohammed Al Maktoum's 4-11 favourite who signed off 2020 with a third in the G1 Queen Elizabeth II S. at Ascot shadowed Shadwell's well-regarded Khuzaam (Kitten's Joy) throughout the early stages. Left in front passing three out as that All-Weather Mile Championships Conditions S. winner started to fade, the bay was pushed out to assert for a comfortable eight-length defeat of the outsider Bless Him (Ire) (Sea the Stars {Ire}), with the G2 Challenge S. winner Happy Power (Ire) (Dark Angel {Ire}) 4 1/2 lengths further behind.

John Gosden had stated beforehand that Palace Pier had yet to get on the Newmarket grass gallops this Spring, so this comeback effort can be upgraded. “It was a good performance–I was very clear he was at about 80%, but luckily nobody put it up to him today,” he said. “He enjoys this track–he won as a two-year-old here and Frankie was very happy with him. He was having a very good blow afterwards, but this has saved me going up and down the all-weather gallops at home hundreds of times so in terms of going to the [G1] Lockinge [at Newbury May 15] next this is the right place. He's a lovely horse and hopefully we can go to the Lockinge and then Royal Ascot.”

Gosden is looking at stepping Palace Pier up in trip after his immediate mile targets, with this track's G1 Eclipse S. mooted July 3. “We'll take it as we go, but it was nice to come here and the race has worked out well for him,” he added. “He'll go further in time when we want to, but for the time being we'll concentrate on this. He was a top miler last year and I'll concentrate on those right now. At some stage, we'll go a mile and a quarter with him as he's always shown me that in his work. The Eclipse is a possibility, but it's very close to Royal Ascot. It's always tight for a horse if they've had a hard-ish race, but we'll put him in and take a look.”

Palace Pier, whose sole defeat came in the QEII after he had lost a shoe, is out of the unraced Beach Frolic (GB) (Nayef) who is a half to the G2 Dante S. winner Bonfire (GB) (Manduro {Ger}) and this stable's G2 Windsor Forest S. and G3 Musidora S. scorer Joviality (GB) (Cape Cross {Ire}) who was also third in the GI Beverly D S. She is a granddaughter of Miss d'Ouilly (Fr) (Bikala {Ire}), a half-sister to the Jacques le Marois heroine Miss Satamixa (Fr) (Linamix {Fr}) who produced the GIII Cardinal H. winner Miss Caerleona (Fr) (Caerleon). She is in turn the dam of another former Gosden luminary in Karen's Caper (War Chant), who was successful in the G3 Nell Gwyn S., GIII Noble Damsel Breeders' Cup H. and GIII Eatontown S. and also runner-up in the GI Queen Elizabeth II Challenge Cup and G1 Coronation S. before producing the G3 UAE Two Thousand Guineas winner Kinglet (Kingmambo) and G2 Derby Italiano runner-up King's Caper (GB) (New Approach {Ire}).