Kingman Half To Workforce a New Rising Star At Wolverhampton 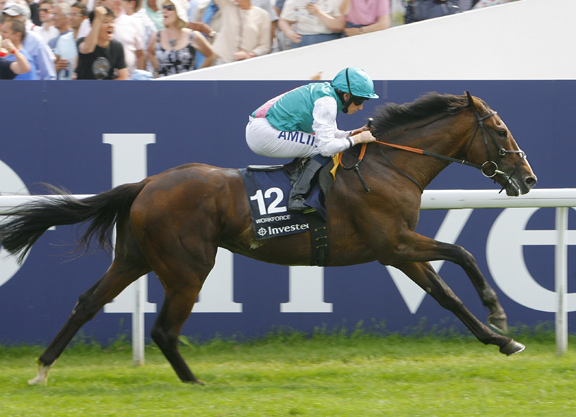 With the action at Newmarket more than two hours old, an otherwise-ordinary Wolverhampton evening card played host to a colt of real potential in Juddmonte’s newcomer Emissary (GB) (Kingman {GB}). Earning TDN Rising Star status in the British Stallion Studs EBF Novice S. over almost 9 1/2 furlongs on the Tapeta, the homebred half-brother to the operation’s Workforce (GB) (King’s Best) has come along too late for “Future Champions Day” in Suffolk but it may not be considered a total flight of fancy to suggest he has a better than outside chance of fitting into that category in time.

Having been taken out of his intended debut at Newmarket by Hugo Palmer after the rain hit last Saturday’s card, he avoided a race against TDN Rising Star White Moonlight (Medaglia d’Oro) which may have proven too much for him at this fledgling stage. His superlative half-sibling made only one outing at two and also earned the TDN Rising Star monicker when overcoming greenness to win at Goodwood in 2009 and two starts later he was winning the G1 Epsom Derby by seven lengths in record time.

Emissary, who drifted to 4-1 before the off, was settled in seventh early by Jack Mitchell and allowed to build gradually before being bumped along approaching the three-furlong pole. Four-wide on the home turn, the bay had come alive and duly brushed aside the useful yardstick Glenties (Karakontie {Jpn}) 150 yards from the line with an impressive and sustained surge. Galloping out strongly past line after recording a 2 1/4-length success, with nine lengths back to Miraz (Ire) (Kodiac {GB}) in third, he drew praise from his rider. “He was a bit green first time and they went a nice gallop to the first bend which just caught him out a bit,” he explained. “He’s impeccably-bred and we always thought a lot of him. He’s got a bit of class and it was nice to get a feel of him on the track. I think he will get better over further and it was a nice introduction.”

The second dam Eva Luna (Alleged), the winner of the 1996 G3 Park Hill S. who also produced the G2 Prix de Royallieu scorer Moon Search (GB) (Rainbow Quest), is a half to the dam of Flute (Seattle Slew) who captured the GI Kentucky Oaks and GI Alabama S. She was later responsible for the GII Goldikova S. winner Filimbi (Mizzen Mast), while the third dam is the G1 Epsom Oaksrunner-up Media Luna (GB) (Star Appeal {Ire}. Emissary’s year-older full-sister Strelka (GB) was Soviet Moon’s first foal since 2009 and her first winner since Workforce and she has yet to produce anything after this promising juvenile.