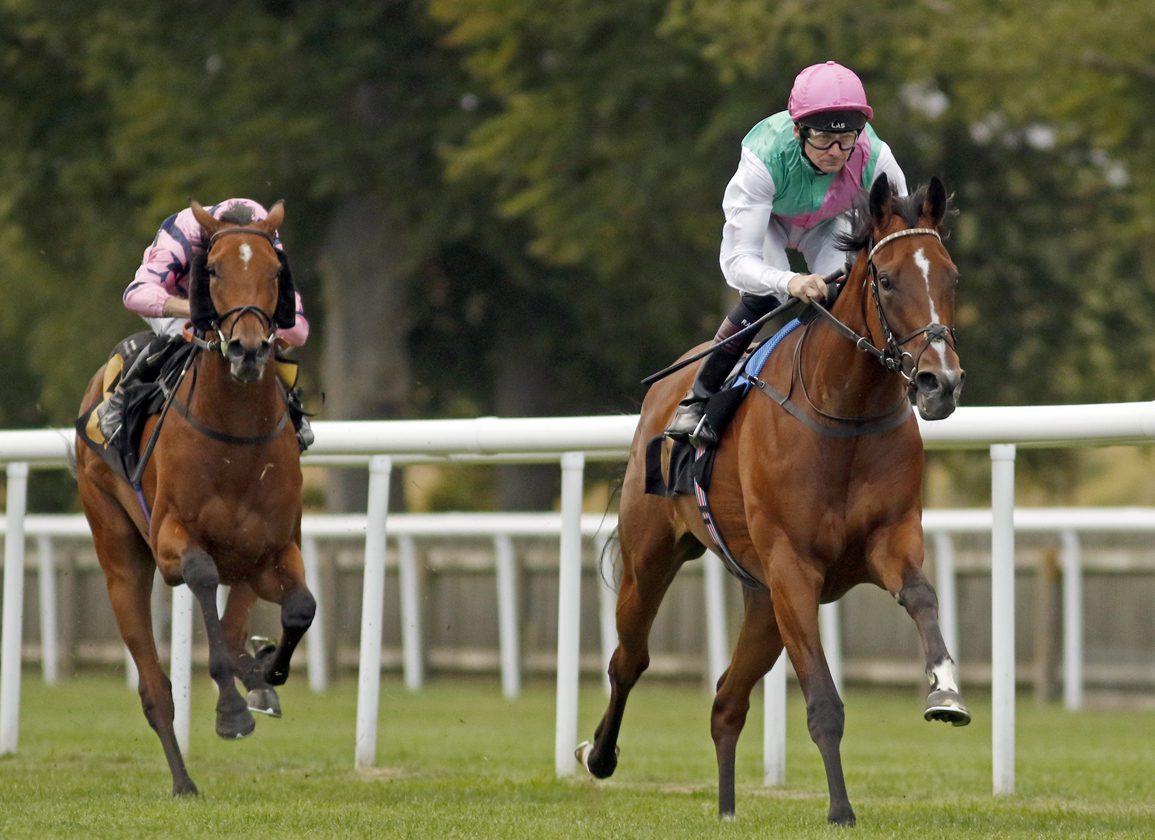 It may be a bit late in the day for a 3-year-old to earn TDN Rising Star status, but Juddmonte's Laurel (GB) (Kingman {GB}–Promising Lead {GB}, by Danehill) achieved the rare feat with a dazzling display at Kempton on Wednesday evening. Carrying a penalty for the fixture's mile novice for fillies and mares, having made a lasting impression when scoring on debut over this trip at Newmarket July 29, the John and Thady Gosden-trained daughter of the G1 Pretty Polly S. heroine was anchored in mid-pack early hemmed on the rail by a confident Benoit De La Sayette.

Despite the slow pace throughout, the 1-2 favourite was able to surge from a position that would have compromised lesser mortals and swamp the well-regarded Pure Dignity (GB) (Dubawi {Ire}) approaching the furlong marker. Powering clear from there, the homebred registered a two-length verdict over that fellow Newmarket debut winner and €2.5million Arqana Deauville September Sale topper who is a half-sister to Sottsass (Fr) (Siyouni {Fr}), Sistercharlie (Ire) (Myboycharlie {Ire}) and My Sister Nat (Fr) (Acclamation {GB}). Another Newmarket scorer, Lady Bamford's One Morning (Ire) (Gleneagles {Ire}), gave the result a solid feel a further 1 1/2 lengths away in third.

“They didn't go a strong pace, I got a lovely lead and she got to the line strongly and gave me an amazing feel,” the winning rider said. Thady Gosden was on hand and added, “She picked up very well and had come on from Newmarket. She has plenty of size and has taken time to mature into her frame. She showed plenty of speed there and there is no reason to step her up immediately. We'll see how she is and make a plan.”

Laurel, who becomes a remarkable 29th TDN Rising Star for her sire, is the eighth foal out of Promising Lead who also captured the G3 Middleton S. and was second in the G1 Prix de l'Opera alongside her Curragh career-best. She has yet to produce a black-type performer, but her daughter Surcingle (Empire Maker) is the dam of the GIII Berkeley H.-placed Sash (GB) (Oasis Dream {GB}). Promising Lead's half-sister Visit (GB) (Oasis Dream {GB}) was successful in the G3 Oak Tree S. and G3 Princess Margaret S. and third in the G1 Sun Chariot S. before heading Stateside and running second in the GI Gamely S. and GI Yellow Ribbon S. and third in the GI Breeders' Cup Filly and Mare Turf and GI Matriarch S.

The daughter of Kingman, ridden by Benoit De La Sayette, confirms herself an exciting prospect for Team Gosden and @JuddmonteFarms. “She's definitely a stakes filly,” says @GeorgeENB1982 from the studio. pic.twitter.com/W3WLB4FbVo