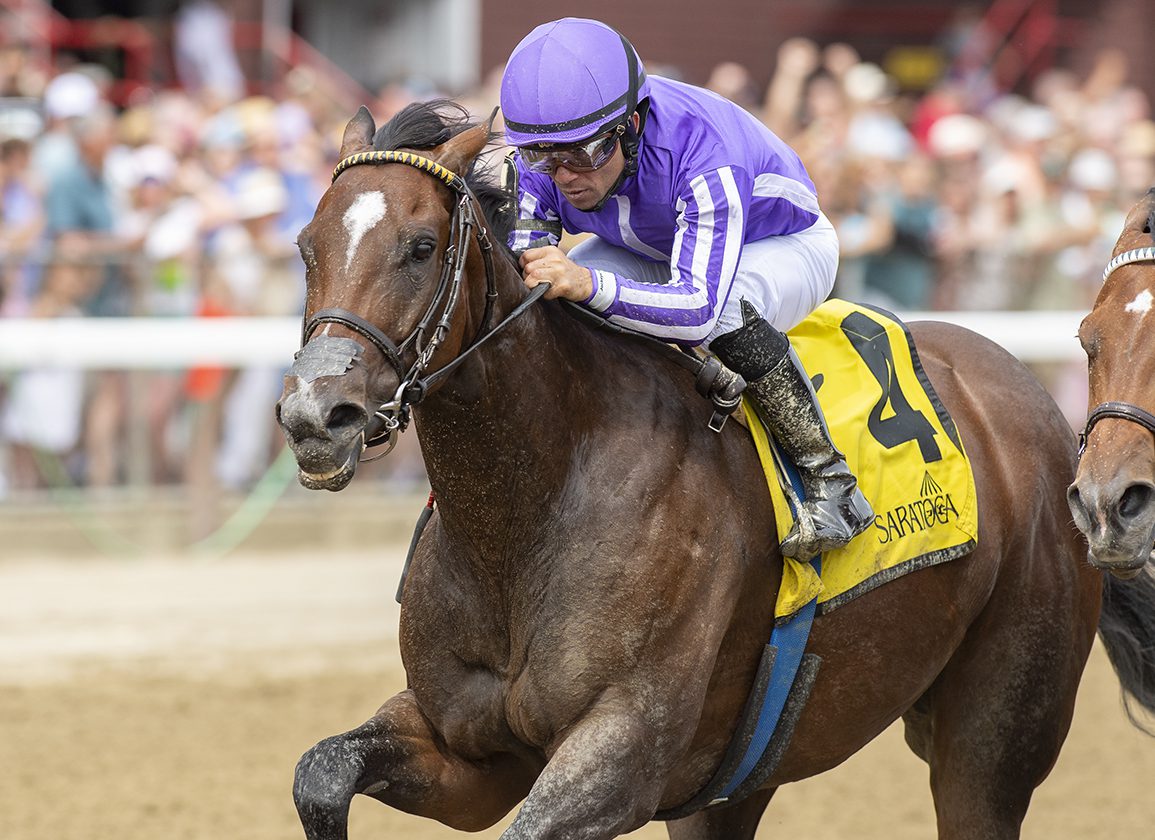 'TDN Rising Star' Kimari (Munnings) earned her first graded win of the season Wednesday when rallying to victory in Saratoga's GII Honorable Miss H. The 3-1 third choice in a four-horse field, the bay broke a hair slow from the outside post, though not as slow as second choice Frank's Rockette (Into Mischief) in the one-hole. Kimari sat off the fence in third with Frank's Rockette off her inside flank as favored Bella Sofia (Awesome Patriot) and 8-1 outsider Amadevil (Dominus) knocked heads on the front end. Amadevil cruised clear of the chalk, clocking a first quarter in :22.72. Frank's Rockette got into gear, charging up the fence to take control from her longshot foe with Bella Sofia and Kimari ranging up together on the outside as they entered the far turn. Frank's Rockette took command at the top of the stretch with Bella Sofia navigating her way to the fence for an inside attempt and Kimari still coming on the outside. Bella Sofia never turned on the after burners and posed the briefest of threats before backing up. Meanwhile, Kimari was just finding her best stride in the final sixteenth, forging clear of a determined Frank's Rockette to win by a half-length. Amadevil and was eased, vanned off and reported to have bled.

“I thought the race set up for today, especially drawing the outside,” trainer Wesley Ward said. “It gave Joel [Rosario] a nice easy run down the backside with no opposition as far as maneuvering to try to get there. He was already there when they opened the gates. That was a key. It just worked out great, and it's always great to stand in the winner's circle for a graded race at Saratoga. There's nothing like it.”

As for what's next, the conditioner said, “Our ultimate goal would be the [GI] Breeders' Cup [Filly and Mare Sprint in November at Keeneland] because it's my home track and her home track. So we'll work backwards from there and get together with Coolmore and give them a few options.”

“She ran good,” Rosario said. “She's a nice horse and always tries hard. I'm glad we got the win today. It looked like there was going to be so much speed and she [Kimari] can be up closer, but we kind of were in a good spot and she did great and responded to everything I asked her to do. I thought for a second the leader might get away, but she kept fighting and got the job done.”

Kimari captured the GI Madison S. at Keeneland last April and was subsequently sent to the sidelines. Resurfacing in the GI Breeders' Cup Turf Sprint at Del Mar seven months later, she checked in seventh behind stablemate Golden Pal (Uncle Mo) and went through the ring at Fasig-Tipton's November Sale two days later, summoning $2.7 million from Coolmore's M. V. Magnier. Returned to Ward's care, Kimari made her seasonal bow in a main track event at Gulfstream Mar. 3, romping by 5 1/4 lengths. The bay was third when attempting to defend her title in this year's Madison Apr. 9 and was fifth last time in the GI Derby City Distaff S. at Churchill Downs May 7.