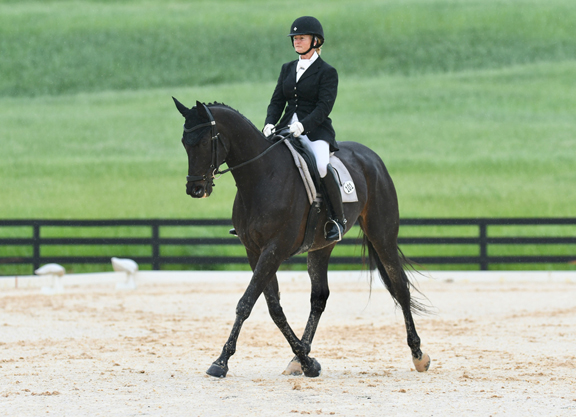 Kim Clark at Morven Park in Virginia in May 2018 | picsofyou.com

Kim Godwin Clark knows Thoroughbreds. Clark spent more than 25 years as an exercise rider and trainer in Maryland before launching Thoroughbred Placement Resources (TPR) in 2008. TPR is a nonprofit with the stated purpose of “improving the lives of Thoroughbred racehorses, both active and retired, by providing training and rehabilitation while educating the public through the development of breed ambassadors.”

“For the entire time that I was working on the track, I was involved in re-homing horses for myself and for other trainers. In 2008, I decided to do it formally and make it a full-time endeavor on our farm in Upper Marlboro, Maryland, “said Clark. “I have five to seven horses in-training to ride every day as well as some in various stages of rehabilitation.”

Clark's lifelong experience with, and love of, Thoroughbreds have fueled her intense focus on intuitive transitioning and high-level training to give each horse the best chance of excelling in the right discipline and becoming a high-profile breed ambassador. Her goal is to change the way that horse owners and show-riders view Thoroughbreds. To achieve that goal, she starts each horse with ground-work and takes her time to see how the horses develop and what they enjoy doing. Because she knows the racetrack routine so well, she is particularly adept at working out those habits learned at the track that don't sit well with adopters and with developing new routines that will serve the horses and their new owners well into the future.

“We keep the horses a little longer to give them a strong base,” said Clark. “Then, we train them to a higher level and get them in front of professionals who might be interested in them.”

Clark has had remarkable success and has placed more than 1,000 horses. A significant percentage of them are competing at high levels in an array of disciplines. In 2012, she enjoyed the distinction of having one of her program horses, a 5-year-old mare Constant Star (Fantasticat), chosen by Olympian Beezie Madden and her husband John for their “High Performance Winners” program. The mare was one of two chosen from a field of 140 to train with the Maddens. TPR produced Rocky Times, aka Houdini, a Four-star eventer, Doctor James, a Two-star eventer, and Mystical Harbor, a National Level Dressage competitor, in addition to a number of AA level jumpers and other notable competitors.

Clark's current high performer is an unraced gelding, Mystical Harbor (Harbor Man), aka Fellow. He came to TPR after being retired from training to race and failing as a riding horse.

“He was spooky and too unpredictable for the young woman who took him off of the track,” said Clark. “On the first day I met him, he told me that he wanted to do dressage and he has excelled way beyond my expectations.”

Fellow and Clark have been invited to learn and perform among the sport's greats including FEI Dressage Judge Linda Zang. Fellow is competing at third level and ready to go to fourth level.

Clark credits a strong base in dressage training as a key to the success of all TPR horses.

“Dressage gives them the strength and the skill that they need to carry a person at all gates and be balanced and confident while going slowly,” said Clark. “A horse is less likely to run away or keep speeding up more than we want when he is balanced and comfortable going slow.

“When I first started retraining horses full-time, I needed to learn more than just galloping. I was incredibly fortunate to have access to lessons and training with Elizabeth Madlener, who successfully competed at the highest levels of dressage on Thoroughbreds. She was long-listed for the Olympic team with two Thoroughbreds.”

Over the years, Clark has also worked one-on-one with many of the most well-known names in the show jumping world such as the Maddens, Joe Fargis and Anne Kursinski, all of whom sing the praises of Thoroughbreds in the show ring and are willing to take on Thoroughbreds who show potential, when they can. But campaigning any horse is very expensive.

“Thoroughbreds are suited for the top of every discipline and showcasing their success in upper levels is always my goal,” said Clark. “This will eventually encourage more riders to buy and show Thoroughbreds. But to get there, we need more breed ambassadors and the best riders cannot usually take on such a project without a sponsorship partner. So, seeking sponsors or a sponsorship program for Thoroughbreds is something on which I am working constantly. Sponsorship at high levels with top riders will increase demand and quickly advance the cause of Thoroughbred aftercare.”

Thoroughbred Placement Services is accredited by the Thoroughbred Aftercare Alliance and the Global Federation of Animal Sanctuaries.

For more information, go to www.goodhorse.org.

Diana Pikulski is the editor of Thoroughbred Adoption Network. For more information go to www.Thoroughbredadoption.com.