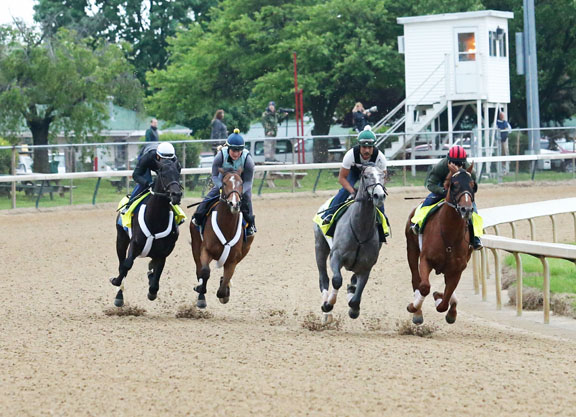 In what became the most dramatic work on a busy Sunday for GI Kentucky Derby contenders at Churchill Downs, Bill Mott trainees Tacitus (Tapit) and Country House (Lookin at Lucky) had unexpected company when joined by Mike Trombetta-trained Win Win Win (Hat Trick {Jpn}) and workmate Souper Courage (Giant’s Causeway). Win Win Win and Souper Courage spontaneously joined the Mott duo to their outside on the far turn with the quartet running four abreast turning for home. Win Win Win closed to pass the Mott pair, who finished on even terms by design.

“We generally would see something like that happen occasionally when they don’t have a [designated] 15-minute break just for Derby and Oaks horses,” Mott said after the work. “I thought about that [beforehand] because I knew there would be some other workers. You just can’t really anticipate it. My team was ready to break off and they probably didn’t know we were going to work. All the riders did a really good job and I really have to commend all of them. It’s not going to hurt them and they better get used to [traffic], if they’re not already or they’ll get a surprise on Derby Day. It’s pretty crowded out there.”

“I thought it went well,” Juddmonte manager Garrett O’Rourke said of the work Sunday morning. “He handled Win Win Win coming up on the outside really professionally. He was under control and got a good blow. That’s all you can ask for, really.”

“I was on the radio with [exercise rider] Mel [Williams on Souper Courage] and told her there was company coming behind her,” Trombetta said. “They started their work at the 5/8ths and that is why they caught up to us so fast. Those things happen, but it is unusual that it happened here with limited traffic. Hey, they jump in and join the party and everybody gets around there OK and everybody is happy.”

Jockey Julian Pimentel added, “That was a little different, but it worked out well. He went about his business and he wanted to go get them.”

Also working at Churchill Sunday, GII Louisiana Derby winner By My Standards (Goldencents), who has been turning heads in Louisville for the past week, went a half-mile in :48.40 (12/76) with jockey Gabriel Saez in the irons.

“Well, that couldn’t have gone any better,” trainer Bret Calhoun said. “It’s just a blessing how well he’s doing entering the Derby. He’s doing everything we’ve asked him to do and just moves so effortlessly around the racetrack. He went in :48.40 this morning, but when Gabe got back to the barn he said he could’ve went around there again. It was like nothing to them.”

“I told [Brian] to go in :48, but the track was pretty good this morning,” trainer Shug McGaughey said. “I was pleased with the way he handled it and glad I got the kind of track we did today. He had two good works at Keeneland and the last one was on an off track, so we know he can handle an off track and what he was on today is probably what he will see Saturday.”

Winner of the GII Fountain of Youth S., Code of Honor is coming off a third-place effort in the Mar. 30 GI Florida Derby.

“He’s feeling good and I think [trainer] Bob [Baffert] has him right where he wants him,” Walden said of Improbable, whom WinStar Farm co-owns along with China Horse Club International and Starlight Racing. “He reminds me of Super Saver when he came in here off Arkansas. The three weeks were a good three weeks.”

Under jockey Florent Geroux–who is actually set to ride fellow Baffert trainee Roadster (Quality Road) Saturday–Improbable broke off just a couple lengths behind workmate Embolden (The Factor), quickly catching up to that one and moving past his stablemate down the lane as he registered splits of :11.80, :23.60, and :36.40 before galloping out six furlongs in 1:13 and seven furlongs in 1:25.60.

“He loves this track. I just love the way he kept on galloping out today,” Baffert said. “That’s what we wanted to see. He gets over it well. He’s not really big, but he jumps a long way. Now I can relax. Now we have to wait for the draw. That’s the last of the anxiety, the draw.”

One day after arriving from California and joining stablemate Improbable in Churchill Downs’ Barn 33, reigning juvenile male champion Game Winner (Candy Ride {Arg}) and Grade I winner Roadster went to the Churchill Downs track for the first time in their Kentucky Derby preparations.

“They just jogged. They’re not going to do much,” Baffert said of the duo.

Baffert added, “All three have different styles. Game Winner he’s like the fullback, Roadster he’s real light and lean, but he gets over the ground well. I’m just happy to be here with three really nice horses.”

The draw for Saturday’s Derby will be held Tuesday at 11 a.m. in the Aristides Lounge on the second floor of Churchill Downs’ Clubhouse.